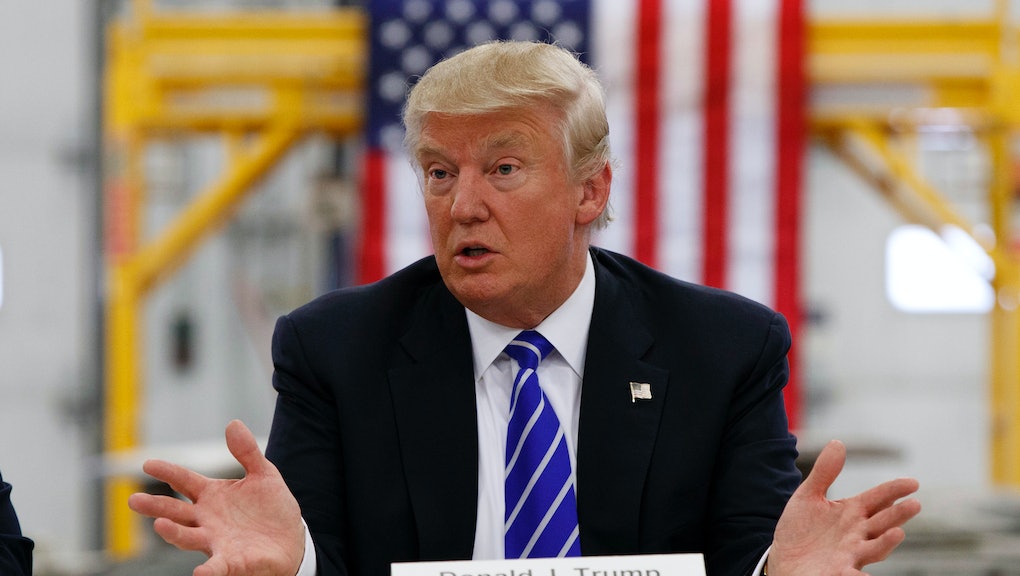 The Wall Street Journal is out with a blistering editorial calling on Republican presidential nominee Donald Trump to start behaving like a normal party standard-bearer or exit the 2016 race.

"Mr. Trump is on the path to losing a winnable race," the members of the conservative editorial board wrote, condemning Trump's "lack of a field organization and digital turnout strategy" and his belief that the incendiary campaign rhetoric that enthralled GOP primary voters will work with the general electorate.

If Trump continues on his present course, the Journal warned, Republicans could even cede once solidly GOP states like Arizona, Georgia and Utah to Democratic nominee Hillary Clinton — with potentially calamitous implications for down-ballot Republican candidates.

"As for Mr. Trump, he needs to stop blaming everyone else and decide if he wants to behave like someone who wants to be president — or turn the nomination over to Mike Pence," the editorial concluded.

It isn't that Donald Trump particularly cares what the Wall Street Journal editorial board has to say about him — there's little hope that he'd heed its advice and drop out of a race that he's running on his terms. The Journal's editorial page, after all, is emblematic of the same conservative establishment that Trump has defied — and, at least in the primaries, defeated — with unmitigated glee.

But while Trump might not much care what the Journal's editorial board thinks of his controversy-plagued campaign, the Republican elite does. And therein lies the real reason the editorial could spell big trouble for Trump's campaign.

The Journal's reprobation comes as many top Republicans are urging the Republican National Committee to cut off financial support for Trump's flailing campaign and focus instead on vulnerable House and Senate candidates. Politico reported over the weekend that RNC officials are taking such pleas seriously, with mid-October looming as Trump's deadline to course-correct — or lose access to millions in RNC funds and the committee's essential ground-and-data operation.

Without a meaningful ground game of his own, Trump is already at a substantial disadvantage to the Clinton voter-turnout machine — a disadvantage that would be compounded if the RNC told Trump to take a hike. When organs of the conservative elite, like the Wall Street Journal editorial board, are calling on Trump to either withdraw or become an entirely new person at age 70, pressure on the RNC to do just that will intensify.