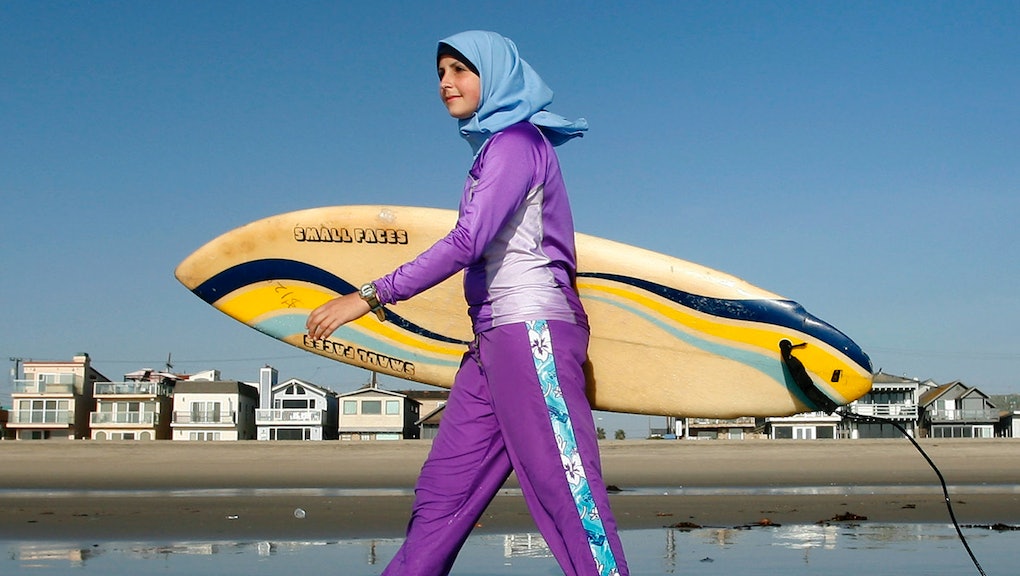 The 'Burkini' Is Banned in Cannes, France, for the Most Islamophobic, Misogynistic Reason

For Muslim women, France might not be the best place to live in right now.

Recently, three French cities — Cannes, Villeneuve-Loubet and Corsican village Sisco — have implemented a ban on burkinis, the colloquial term for full-body swimwear that covers a woman's hair and body, leaving only the face uncovered.

Since the mayor announced a ban on burkinis in the French Riviera, 10 Muslim women were arrested by local police for wearing the swimwear, Middle East Eye reported. Six of them were let go with a warning and four were forced to pay a fine of 38 Euros.

The French highest judicial court, The Conseil d'Etat, or the Council of the State, is expected to make a ruling on the constitutionality of the burkini ban within the next few days. French Prime Minister Manuel Valls, a white non-Muslim man, has already been an outspoken critic of the burkini and endorsed the ban by calling it as an "enslavement of women."

On Aug. 9, an event for Muslim women called Burkini Day was canceled at a waterpark near Marseilles. Days later, David Lisnard, the mayor of Cannes, announced a ban on all burkinis in pools and beaches.

Lisnard aims to prohibit "beachwear ostentatiously showing a religious affiliation while France and places of religious significance are the target of terror attacks," the Independent reported.

To make matters worse, Cannes' Head of Municipal Services Thierry Migoule made the unfair connection with Muslim women who wear the burkini to those who pledge allegiance to terrorist organizations.

"We are not talking about banning the wearing of religious symbols on the beach... but ostentatious clothing which refers to an allegiance to terrorist movements which are at war with us," Migoule told AFP.

This burkini ban is the latest attempt to marginalize the Muslim community. In 2004, France banned all religious headcoverings — deliberately aimed at Muslim women who wear the headscarf — in public schools and institutions. Then, in 2010, the French Senate banned burqas all across the country under President Nicolas Sarkozy's leadership. Simply put, French law has a history of policing Muslim women's bodies.

You might think that the ban would shake Western white feminists to their core, since part of those beliefs are that a woman should be able to choose what she does with her body. However, one French feminist had a bit more than 140 characters to say about that:

But many other Twitter users have decried these bans as racist, misogynistic and idiotic:

If secularism is now a priority for France, then all French residents should be treated equally under the law. This means that French stores that are closed on Sundays in honor of Catholic traditions should stay open. If Muslim-women-only swimming events are canceled, then similar events for Orthodox Jewish women should be as well.

But this isn't about secularism. This is about collectively punishing Muslims — who have the highest number of casualties from ISIS, mind you — for the actions of barbaric individuals who have perverted their faith.