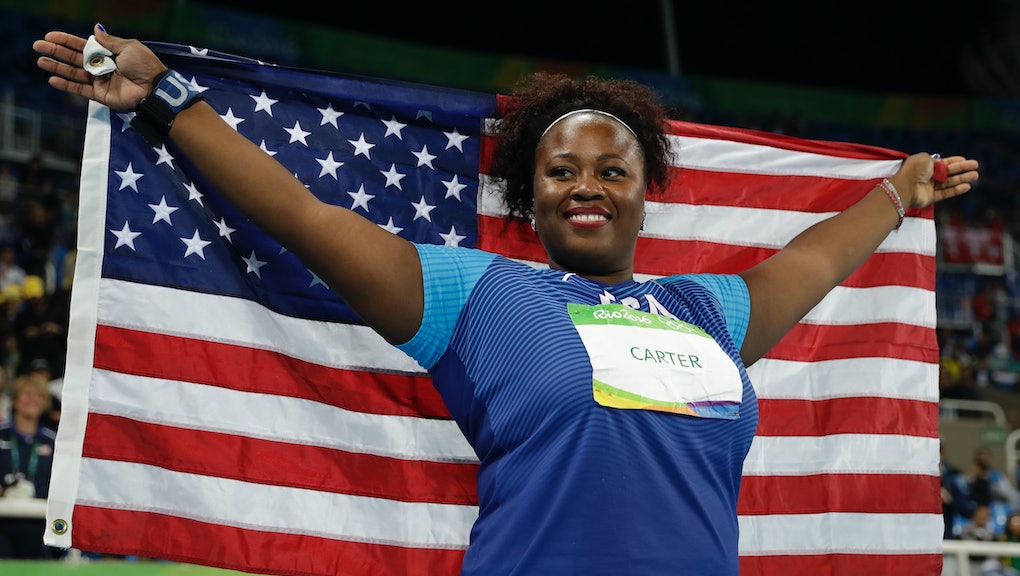 To compete in her Olympic event, the women's shot put, Michelle Carter has to hurl a 4 kilogram ball with all her strength, launching it into the air. On Friday night, Carter proved she's the best in the world at shot put — breaking the American record and winning an Olympic gold medal with a distance of 20.63 meters (68 feet, 8 1/4 inches).

But Carter isn't just an impressive athlete; she's also a powerful advocate for celebrating body diversity and wearing whatever makes you feel like you.

"I think now, it's like, 'You know what? We're girls and we can throw heavy balls and be in the dirt and we look good while we're doing it,'" she told the New Yorker in a recent profile. "I think it's bringing more attention to the sport and girls are realizing, 'Hey, I can do this and it's okay to do this as a girl.'"

In her interview with the New Yorker, Carter also celebrated being true to yourself. A professional makeup artist with her own makeup company, Shot Diva, Carter proudly brings her own style to competitions — even when it makes her stand out.

"For a couple of years, being professional, I kind of questioned myself," Carter said. "Should I wear my false lashes or take the time I want to take so I can feel good when I go out on the field? Because nobody else was really doing that. And I thought, No: I'm not going to change what I believe I should look like to fit anybody else's standards. I believe if you look your best, you're going to feel your best, you're going to do your best."