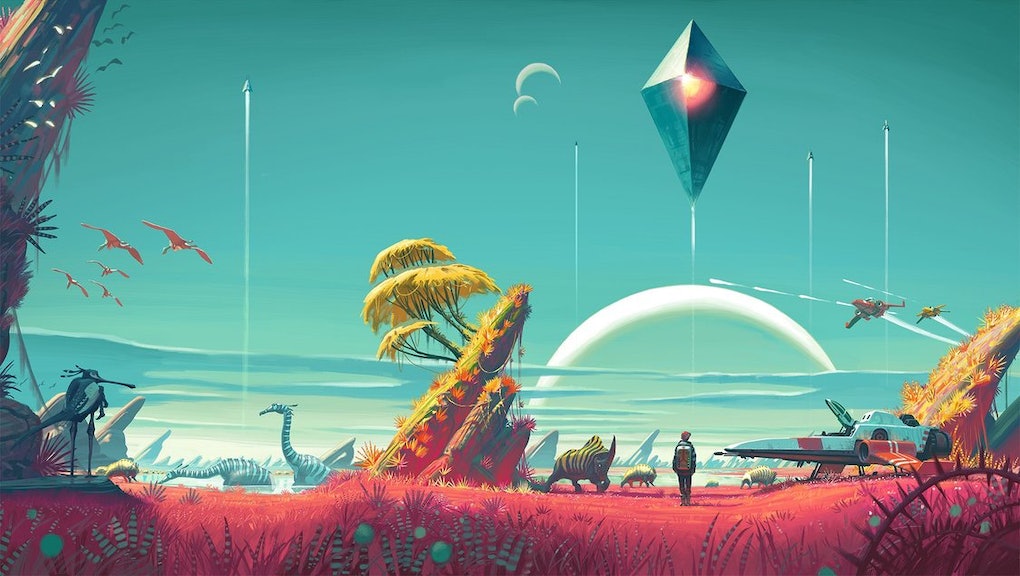 No Man's Sky has finally arrived. The open universe survival game hit shelves worldwide on Aug. 12 for Windows and PlayStation 4. The release immediately reached historic heights — in the U.K., No Man's Sky topped the charts within days on its way to becoming the second biggest PS4 launch ever.

Lots of sales means lots of players, and these gamers are banding together to discover the secrets of No Man's Sky's vast, procedurally generated universe. No Man's Sky is light on instruction and places a strong emphasis on exploration. Therefore, it's up to you to unearth the mysteries of the game's 18 quintillion planets. But no need to get overwhelmed — we've done some research to help you advance through your voyage. Here are some tips and tricks for enjoying No Man's Sky to its fullest potential.

There are some useful items lying around your starting point. Taking the time to loot ground zero can give you a major advantage in the beginning stages of the game.

OK, maybe not everything, but scan often. Pretty much every physical object you come across — whether it's an animal, plant, or even a rock — can be scanned and uploaded to a database maintained by galaxy scientists. In turn, you'll be rewarded with credits that can be used to upgrade your gear or even purchase a new spaceship.

Use your scanner to identify dangerous animals

While your Multi-Tool scanner will come in handy for collecting planetary resources and money, you can also use it to detect danger. Line up a critter in your scanner's sights to receive a breakdown of the beast's eating habits and temperament. This way you can size up alien life from a distance without getting mauled.

Grab your gear from your grave

If you ignore the above advice or manage to piss off the floating, police-like sentinel robots, you might meet an untimely end. In No Man's Sky, it's especially important to stay alive — when you die, you lose every item in your possession. To minimize the damage, get in the habit of sending back the best gear to your ship. And if death does befall you, head back to the location marked as your grave to retrieve your fallen belongings. Then leave immediately — before that giant alien shows up and tries to kill you again.

Some creatures you encounter might be malicious, but most seem open to interaction. If you have a particular resource they crave, feed it to them and you may receive a gift in return. Either they'll lead you to a collectible bounty or they'll poop out a valuable commodity, like minerals. Seriously.

Either they'll lead you to a collectible bounty or they'll poop out a valuable commodity, like minerals. Seriously.

As soon as the sun goes down, press up on the D-pad to activate your exosuit's flashlight. It's also handy for exploring dark caves, and the bulb works underwater as well.

No Man's Sky is all about collecting resources — without them, you simply cannot progress in the game. Your starter exosuit can only hold so much inventory, which is why it's critical to look out for drop pods. Seek out the orange beams of light shooting into the air, otherwise known as signal scanners. You can then hack them with a bypass chip, which could lead you to a drop pod that will increase your exosuit's inventory slots. The more resources you carry, the better chance you have of survival.

So far, it appears there are four alien languages in the game -- the Vy'keen, Korvax, Gek and Atlas — but who knows what else is out there on those 18 quintillion worlds? One thing is for sure: Learning alien tongues will expand your dialogue, trade and mission options. Whenever possible, check out the enormous monuments dispersed throughout the universe to learn a few words that'll gradually increase your fluency. Plaques and smaller stones marked with purple icons on your radar can also teach you new words as well.

Take your time and enjoy the ride

No Man's Sky is an enormous game that can't be ever really be "beaten." There's rumors that you can win by reaching the center of the universe, but even then, that's sort of missing the point. Take your time exploring the boundless wonders of this universe and engage with as many planets, species and structures possible. Happy exploring!