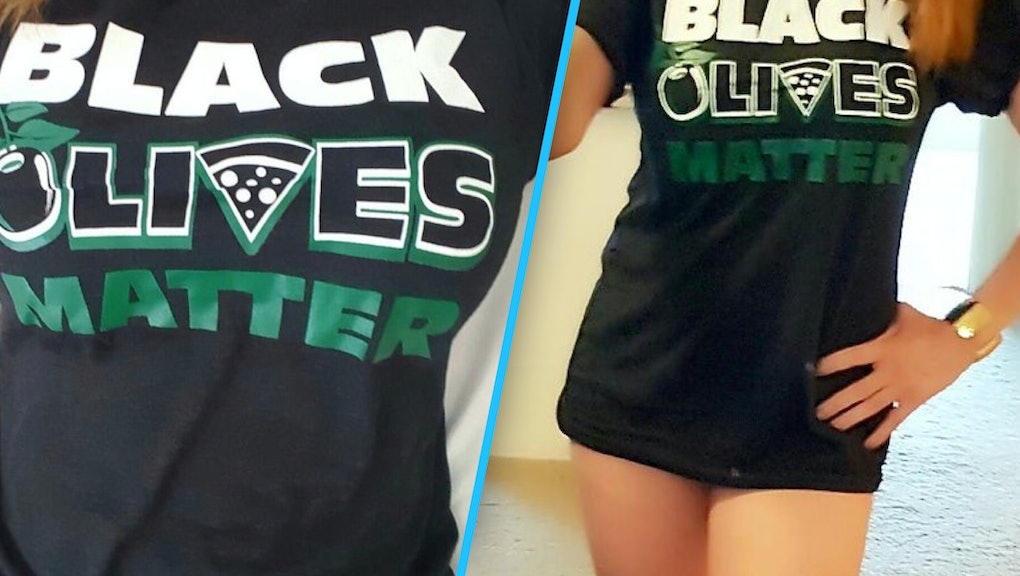 Attention all people, business owners and creatures that breathe: Please stop making Black Lives Matter puns. The action belittles a movement that is fighting centuries of exploitation — not to mention modern-day violence — to affirm the very right of black people to exist safely and freely.

Back in July, a restaurant in Albuquerque displayed a billboard that read "Black Olives Matter — Try Our Tapenade." After scrapping the billboard text in response to criticism, the restaurant, an Italian eatery called Paisano's, has again stirred the pot by selling the same slogan on apparel.

In a KOB 4 interview, restaurant owner Rick Camuglia said he feels no regret or need to apologize regarding the billboard signage. And now he's made it crystal clear that he feels no remorse: On August 5, the restaurant's Facebook page posted a photo of a "Black Olives Matter" T-shirt, noting that shirts and hats with the slogan would soon be available on the restaurant's website.

Indeed, both the T-shirt and the hat are now available for purchase online, retailing for $20 and $25 respectively.

The T-shirt product description reads: "The slogan that started it all! Be a part of it instead of a bystander."

What exactly is the "it" that the slogan started? Mic has reached out to Paisano's and has yet to hear a response.

Paisano's has now mocked the BLM movement twice. As many Facebook commenters have pointed out, capitalizing off of a slogan symbolizing the fight for racial justice during a year in which at least 167 black people have been killed by police is insensitive, racist and, as one commenter said, a pathetic way of "poking fun at the murder of unarmed citizens."

Still, some restaurant patrons — and faraway fans — have shown support for the "Black Olives Matter" stunts. On July 15, the restaurant Facebook page posted a status that read: "A heartfelt 'Thank you' to you from our crew, some of whom were moved to tears because of your kind words and outpouring of support."

According to the Facebook post, many customers requested "double black olives" on their orders as "a unique way to show solidarity." There are more than 100 comments on the "thank you" post, many of which defend the slogan for being "cute" and an obvious play on words.

If you're struggling to find the meaning in the "Black Lives Matter" slogan, please read this very eloquent but elementary analogy. It should do the trick.