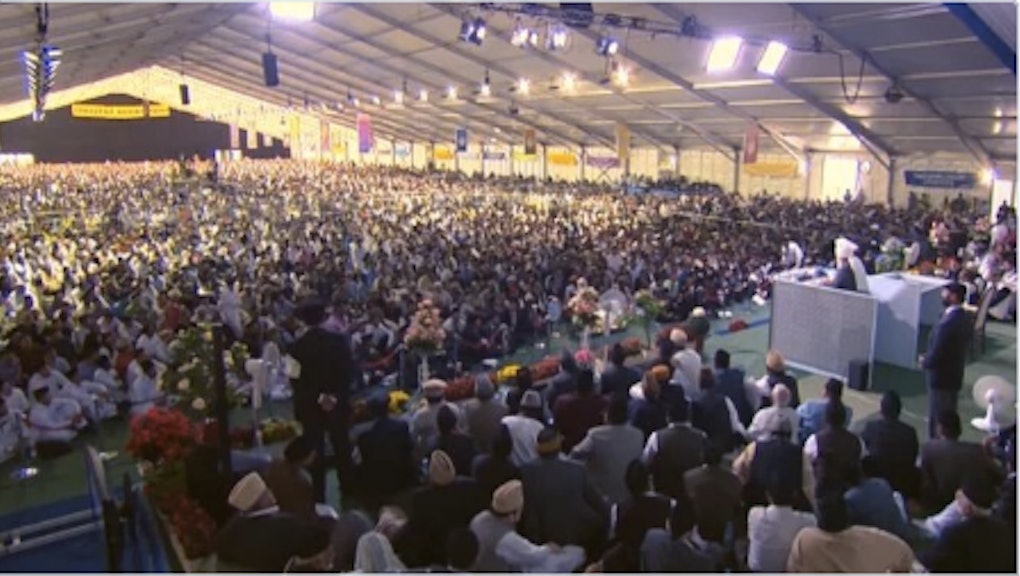 Over 30,000 Muslims in the UK Marched Against ISIS — Of Course You Didn't Hear About It

More than 30,000 Muslims from around the world congregated at a farm in the United Kingdom for a three-day event protesting ISIS and religious extremism, the Independent reported. The protest was part of the 50th annual Jalsa Salana, an annual convention and gathering for Ahmadiyya Muslims.

The Ahmadiyya sect was founded in India in 1889 and faced persecution and violence from religious extremists in countries abroad. Despite their plight, the religious movement's official motto is "Love for all, hatred for none" and their philosophy is rooted in tolerance over extremism.

Media coverage of this large-scale gathering was barely covered in mainstream U.S. news. Even though this image flies in the face of comments from right-wing pundits and seemingly anti-Islam commentators who often ask for Muslims to speak out against Islamic terrorism. The truth is Muslims have condemned extremism repeatedly, and many people are just not listening.

Muslims have condemned the Bastille Day attacks and the Orlando shooting massacre. In December, nearly 70,000 Muslim clerics denounced religious extremism. In Belgium, Muslims condemned the terrorist attack in Brussels and donated blood. These statements have happened so often that in 2012, a professor at the University of North Carolina compiled a list of them from the global Muslim community.

And if you're still not convinced, there's a whole Tumblr blog titled "Muslims Condemning Things," listing cases where, you know, Muslims have condemning terrorism and other acts of hatred.

Clearly, the question shouldn't be whether Muslims — who have the highest number of casualties from "Islamic extremism" — are condemning terrorism worldwide.

Instead, we should be affirming Muslims that the burden of responsibility does not fall on their shoulders.