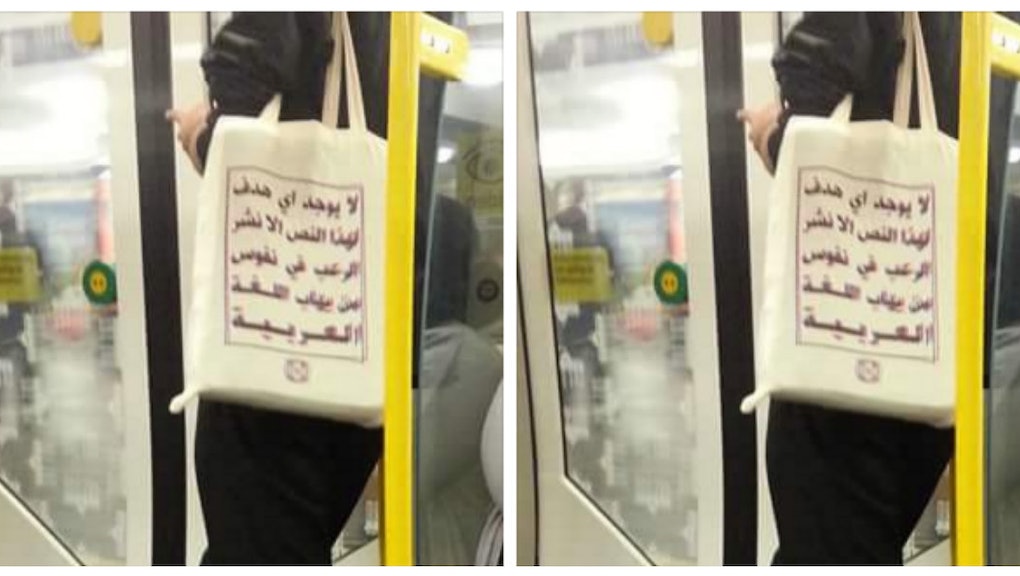 Some fears make sense: Like the fear of heights, or spiders, or even, the boogeyman. However, fear of the Arabic language is pretty irrational.

In a Berlin metro car, a woman was spotted wearing a tote bag with Arabic lettering scrawled in print within a boxed frame. The Arabic lettering isn't a pledge of allegiance to some religious extremist group. In fact, the translation is quite tongue-in-cheek: "This text has no other purpose than to terrify those who are afraid of the Arabic language."

There's been several incidents where people who speak the Arabic language have been vilified by others and even confronted by law enforcement.

In July, an Emirati businessman wearing his traditional clothes while speaking Arabic on the phone outside of a hotel in Cleveland was tackled to the ground with assault rifles aimed at him and handcuffed by the local police.

Someone familiar with the hotel clerk called 911 and claimed that he pledged allegiance to ISIS. He didn't.

In April, Khairuldeen Makhzoomi, a student at the University of California Berkeley, was ejected from a Southwest Airlines plane after a female passenger heard him speak in Arabic on the phone and told the flight crew.

To make matters worse, lawmakers have also contributed to the xenophobic attitudes toward Arabic speakers.

Former GOP presidential candidate and U.S. Senator Lindsay Graham told the American Israeli Political Action Committee at a May 2015 dinner in Boston, that anything with the word "al" in Arabic is not a good look.

"Everything that starts with 'al' in the Middle East is bad news."

The politician was referring to extremist networks like al-Qaeda and al-Nusra, but the word "al" in Arabic literally translates to "the" in English. There are also several words in English, Foreign Policy points out, that have the word "al" in them as well: alcohol, albatross, algebra, and alfafa to name a few.

Being afraid of Arabic isn't a rational fear, in fact, it's really rooted in ignorance and hatred.