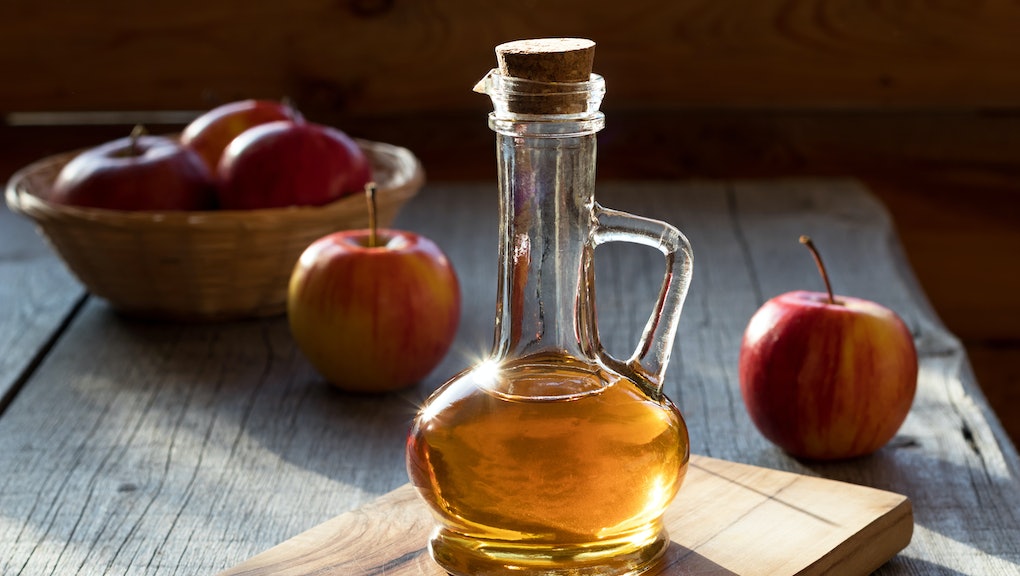 Apple cider vinegar and weight loss: Is there any truth to the hype?

However, its weight loss benefits are unproven, and unfortunately, chugging a bottle of apple cider vinegar isn't really going to help you slim down.

Kathleen M. Zelman, director of nutrition for WebMD, says to avoid the hype about apple cider vinegar. "It is a gimmick, it has no magical powers to promote weight loss," Zelman said in an email. "It is often used with a very low calorie diet plan which is the basis for the weight loss, not the vinegar."

Be warned, the effects of consuming too much apple cider vinegar can also be dangerous. "If you don't dilute it and take too much, you can experience throat burning and discomfort," Zelman said. "It's a fad diet and not recommended by this nutritionist."

So why do people think that apple cider is connected to weight loss? "[People] believe [apple cider vinegar] is working because of the vinegar but in reality, most of these diets that include vinegar are very low calorie which is the reason for the weight loss." Zelman clarified.

Zelman is not alone in her opinion. Dietitian Dana Hunnes of UCLA Medical Center also does not endorse apple cider vinegar for weight loss. "The evidence for vinegar as a weight loss tool is scant to being a placebo effect only," Hunnes said in an email. "It may be that vinegar upsets the lining of the GI tract thereby reducing desire to eat. It may also slow down digestion ever so slightly, prolonging satiety. The placebo effect might affect weight loss if you believe it is doing something beneficial for your weight."

Overall, when it comes to apple cider vinegar, Hunnes says, "I wouldn't recommend it for weight loss. Healthy diet and exercise are more effective."

So instead of taking that shot of apple cider vinegar, power walk on over to the farmers' market!

This article was originally published on Sep. 2, 2016