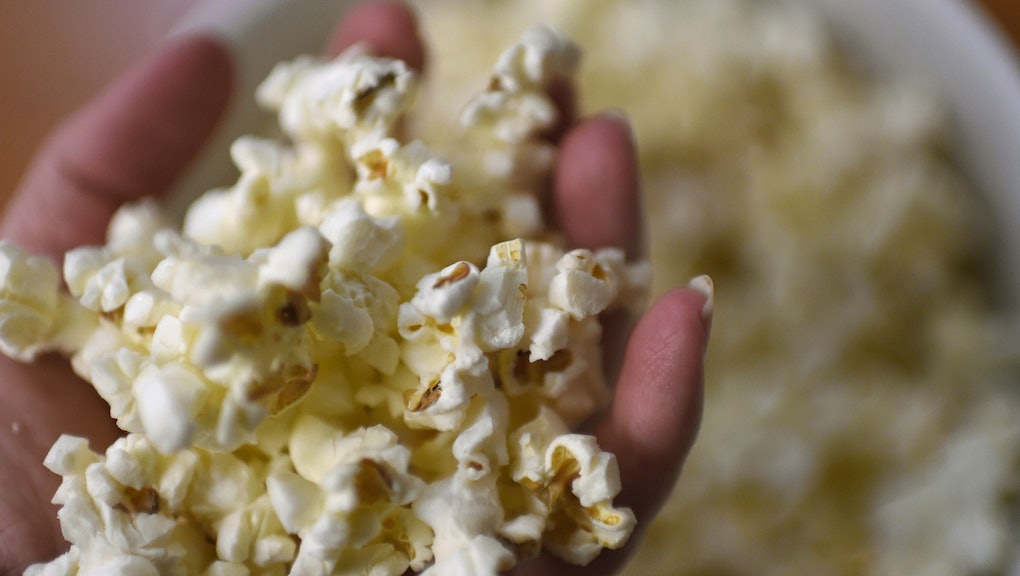 Going to the movies is not a cheap thrill: A 2015 report from the National Association of Theater Owners revealed that the average movie ticket price in the United States is $8.61, and that's without the cash you'll inevitably dish out for movie snacks. Popular concession stand items often come with a 700% markup, ABC News reported in 2014, meaning that a meager bag of popcorn and a soda can cost a pretty penny.

But where's the pleasure in going to see a big screen flick if it's not paired with a crunchy nosh of some sort?  Rather than succumb to the costly, and possibly stale, snacks your theatre has to offer, considering beating the system by sneaking in your own movie-time treats.

Do note: There's a real art to stealth snacking in theaters. The food you bring in must meet a number of criteria, or you risk angering your fellow movie-goers, or worse, getting caught.

Here are the rules:

1. The snack cannot have a strong smell because, duh. This eliminates most warm food.

As for stealth you'll need to weasel the goodies into the theatre, the dedication is up to you. You can go as far as taping a watermelon to your stomach to feign pregnancy, but really, the only things you'll really need are a big tote bag and an extra serving of confidence.

In compliance with the rubric above, here are 13 of the best snacks to bring to the movies:

Wine doesn't just pair well with a Netflix binge, as you can probably imagine. Smuggling a bottle into a theatre is a challenging and risky feat, but canned wine solves all the issues. Canned wine sales have doubled in the past year, meaning it probably won't be too tough to find a pack at your local grocer or wine store. Bonus: They fit easily into a sweatshirt pocket.

If you're looking for something that is still boozy but a little more delicate, pick up a small bottle of saké. The Japanese rice wine pairs well with a number of snacks and is often sold as single serving cups, which are very affordable.

Grapes are essentially the popcorn of the fruit world. They taste great and are easy to eat by the handful. Plus, they are self contained, meaning that there is no peel to worry about throwing away, and don't require utensils to eat.

While it may not seem so upon first glance, a movie theater is great place to be fancy — at least when it comes to your snacks. Tea sandwiches, which are simple sandwiches made of bread, butter, cheese and thinly sliced raw vegetables, are not only delicious, and relatively scent-free, but are very portable and fun to eat. Keep your pinkies up while eating to elevate the glamor.

Onigiri, which have their own emoji, are Japanese rice balls that come wrapped with seaweed and stuffed with everything from pickled vegetables to leftover fried chicken, Serious Eats noted. They're like a larger, hand-held and raw fish-free version of sushi. They are easy to make at home or pick them up from a local Japanese grocery store on your way to the movies for a quick, but hearty, snack.

A jar of Speculoos, AKA cookie butter, is the one exception to the no utensil rule. The spread, which consists of crushed, spiced cookies, is essentially the closest thing you'll get to Heaven on Earth. And while the name indicates it should be, well, spread, on other foods, its best consumed by the spoonful straight from the jar. You won't regret it.

If your plan at the theater is to sit through the latest James Cameron film, definitely bring a protein heavy snack to keep you full through what is inevitably going to be a three-plus hour film. Jerky is protein-packed: A one-ounce serving of beef jerky contains around seven grams of the stuff Jerky's flavor options are boundless, so you could theoretically snack on several different types throughout the movie.

Must have chocolate at the cinema? Slip a box of Pocky Sticks into your bag. While regular cookies might be too crumbly to snack on while watching a movie, the chocolate coated biscuit sticks, courtesy of Japan, are easy to crunch on without leaving behind a mess. Just maybe avoid this sexist flavor.

Just because you are at a movie theatre doesn't mean that your snacks can't have some finesse. Hard cheeses like parmesan pair well with cured meats like prosciutto to form a perfectly salty and very mature plate of nosh. Wash it down with a can of wine for the classiest movie night in town.

There are instances in which "dinner and a movie" needs to occur simultaneously — i.e. when you're really, really, really hungry and don't have much time before the previews go on. Allow a giant, stuffed burrito to serve as your fuel. The popular Mexican dish is filling and it tastes great at room temperature. Plus, burritos are self-contained and require no silverware to eat. Just maybe bring a few napkins.

Into movie theatre popcorn but not its price? Try baked chickpeas. The legume gets extra crunchy when cooked in an oven and is easy to eat by the handful. An added bonus: Chickpeas contain a number of important nutrients, including fiber, so this makes a relatively healthy snack.

Chocolate covered almonds serve nearly every snacking desire. They are sweet, but also a little salty, crunchy, but also smooth thanks to the luscious chocolate coating. And because they are relatively calorically dense, you only need a small packet to get you through the entire film making. These are one of the easiest snacks to illicitly munch on.

Who wouldn't want to spend a few hours snacking on chocolate-and-powdered sugar-covered cereal? A movie theater is the ideal setting to eat puppy chow because it's so dark, no one will be able to see just how much you've consumed.