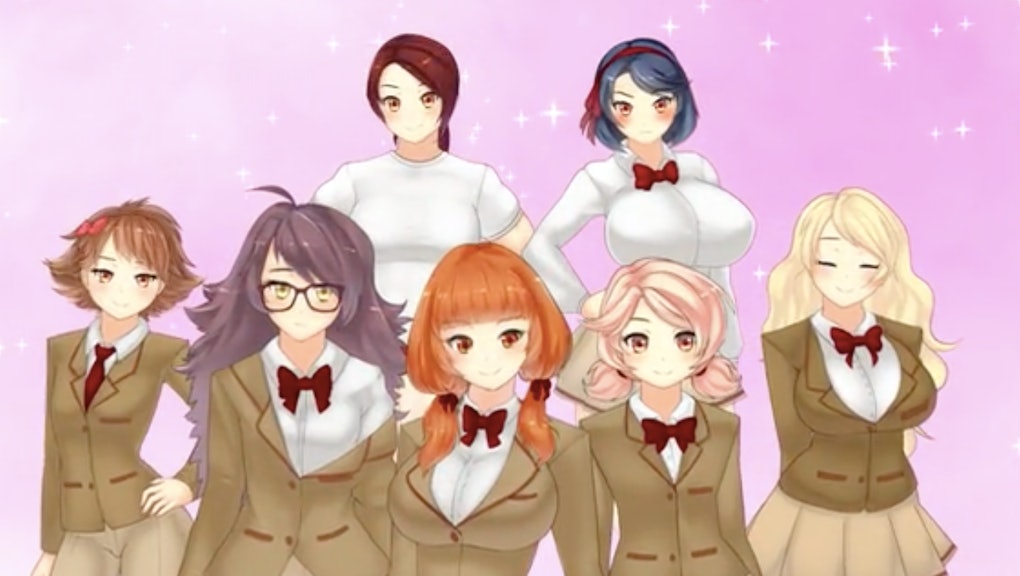 Imagine you're on a sunny stroll through a park. The grass is green and the birds are singing, until suddenly, you fall face first into an oversized pair of animated breasts.

Harem Protagonist is an interactive dating simulation in which, per a description on the game's Kickstarter, players embark on a quest to "conquer" the hearts of "several hot anime chicks." Players can unlock bonuses like French maid fetish outfits and "boob physics sliders" to increase or decrease how much characters' breasts jiggle.

Last week, the indie video game project, also called a visual novel for its focus on interactive storytelling elements, quickly exceeded its 8,000-euro Kickstarter goal, raising 62,701 euros (almost $70,000) in its 30-day campaign. It is now ranked as one of Kickstarter's top crowdfunded anime visual novels of all time and is scheduled for launch in 2017.

While dating sims with misogynistic themes like HP aren't necessarily new or unique, the enthusiastic support the game has received from international players prompts the question: Why do men love playing with virtual girlfriends? Is this type of digitized emotional role-play inherently dangerous? Or can it be, in some instances, therapeutic?

Virtual dating games like HP are already wildly popular in Japan. (Mic has reached out to the Madrid-based indie studio behind Harem Protagonist, Starbeam Studio, and will update when we hear back.)

For example, the most popular virtual girlfriend simulator is the LovePlus game series, in which players woo virtual girlfriends and take them out on dates. It's basically like having a Tamagotchi, but with women instead of pets.

Yet the vast majority of these dating sims are targeted at male players, who have been described by various media as pathetic and creepy or just lonely. Despite this stereotype, however, many players feel the games help them practice social skills and learn how to navigate new situations in offline

The global spread of the genre proves it strikes at a core human need.

"It's a nonthreatening space," Stetson University professor Christopher Ferguson, who studies video games and psychology, said in a phone interview. "It can help with stress reduction ... Sometimes [dating sims] can be a safe space for rehearsing and practicing."

Ferguson believes this type of simulated emotional play can help people with a wide range of mental health issues, from social anxiety to Asperger's. Even for those without these challenges, he thinks networking with other fans can help gamers develop a supportive community.

However, HP fails to feature relatable, humanized characters for this kind of therapeutic role play. For example: One character, Izumi, is described almost exclusively with references to her gargantuan, perpetually bouncing bosom (even when she's standing still).

On Kickstarter, the creators describe the strategy of the game as follows: "Use the information and clues you have [about female characters] to get the results you want." Offering users the opportunity to play as a female protagonist seeking a lesbian romance does little to negate the game's inherent sexism.

Japanese professor Mafumi Usui agreed that these games, which allow players to control female avatars with no agency in order to, in some cases, have sex with them, don't promote a healthy view of heterosexual sex.

"Young players probably enjoy it in the same way as romantic novels or dramas," Usui told The Telegraph back in 2011. "But older players are generally those who do not have satisfactory relationships."

There have been countless studies about the negative impact of sexist video games. One such recent study out of Ohio State University found that playing games like Grand Theft Auto caused men to exhibit less empathy toward female victims of violence.

It's not a far stretch to consider that misogynist dating games — with interactions like the nonconsensual motorboating that introduces players to Izumi — could have a similar impact. Yet Ferguson thinks it's still too soon to write off games like HP, especially because users can choose to avoid some of the more offensive gameplay options.

"Individual users will have very different responses," he said. "It's not that media doesn't have any impact. It's that the impact differs so much its hard to definitively say 'this will be harmful.'"

Virtual role play can also help players explore their sexuality. "Games can be a safe way to live out a fantasy element," Ferguson added.

The emotional draw of virtual romance is real and healthy, but many experts agree video games should be used in moderation.

"Make sure it's not taking away from real relationships," he said, citing an issue that is already prevalent among Japanese fans. "If [players] prefer the virtual girlfriend over real-life partners, that would be the time to reconsider ... Give yourself a reality check."