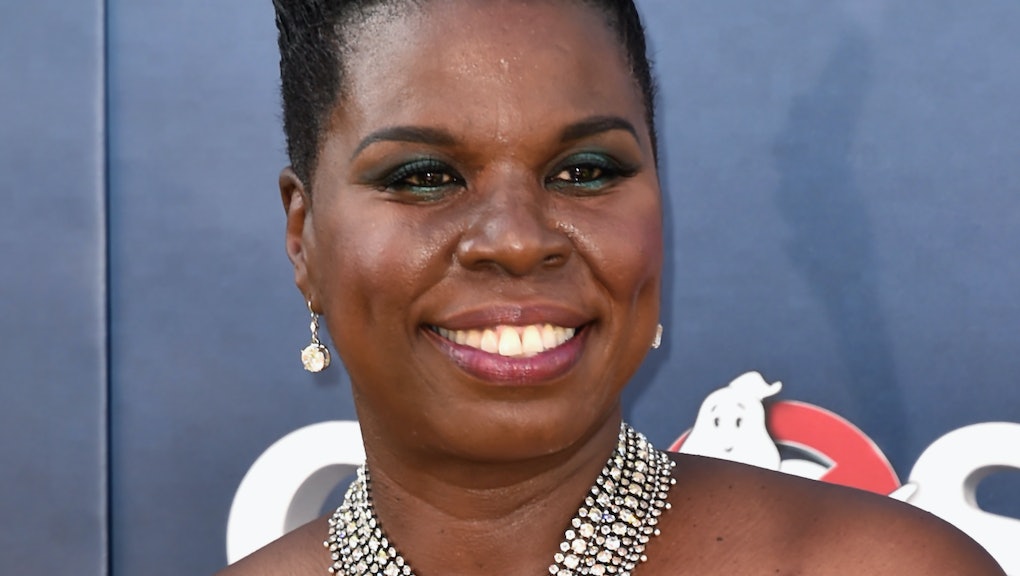 While Leslie Jones' loved ones, colleagues and allies rallied to express their disgust over the vicious hack that leaked her nude photos to the general public on Wednesday, a horde of racist, sexist revelers raised a glass to Jones' abject humiliation.

The "alt-right" — an underground nationalist movement that recently gained unprecedented relevance as Donald Trump's young, ravenous voter bloc — gathered on Reddit, 4chan and 8chan to celebrate the hackers who hijacked the Ghostbusters star's personal website and used its platform to leak her passport, her license and her stolen nude photos.

On Reddit's powerful hive of Donald Trump fandom, /r/The_Donald, one person described the attack on Leslie Jones as "the art of the shitpost." "Leslie Jones' site hacked, video of Harambe placed at the top, nude photos posted," wrote user CoC4Hire, referring to the the internet-famous gorilla — a purposefully offensive, blatantly racist signature on Jones' attack. "Leslie's a mess."

"It is her own fault," responded user DonnaGall, arguing that the revenge-porn hack was justice for Twitter banning right-wing provocateur Milo Yiannopoulos after he helped to incite the original harassment campaign against Jones. This is a common sentiment on the subreddit. "She made racists tweets for years" [sic], DonnaGall added. "Then, when someone hurt her feelings, she played the 'race card' and got Milo banned. Typical liberal SJW behavior."

Other users on /r/The_Donald ridiculed Jones' body. One called her "Harambe's side bitch"; others just called her Harambe. Another started a thread about the "double standards for shitty and unhumorous actress Leslie Jones," while a commenter called her a "big cow ... all she knows to play is the stereotyped loud-mouth lewd black woman." Another agreed: "Her faux victim shit on Twitter was pathetic."

On 4chan, the infamous 13-year-old collection of forums known for its anarchic embrace of offensiveness and free speech, users focused on blaming Jones for having nudes in the first place.

"Why did she feel the need to take and send naked pictures of herself? It's bad enough that worthless teenage sluts are doing this, but she's a grown woman," one anonymous user wrote. Others in the thread — one of multiple conversations on the forums /b/ (random) and /pol/ (politically incorrect) — posted Jones' nude photos alongside gorillas. They called her "that fucking ape" and a series of other racial slurs.

On radical 4chan alternative 8chan, known for hosting the central hive of Gamergate alongside forums for pedophiles and sexualized images of children, the response was somehow even more extreme.

A common theory was that Jones leaked her own nude photos. "I think she just doxxed herself on purpose at this point," one user theorized. Another: "She got sent to Rio and a bunch if sympathy jobs for being 'muh victim,' she's just playing on it further." On 8chan forums /b/ and /pol/, users posted racist caricatures over Jones' face and added Jones' image to National Geographic covers as they shared her passport and driver's license.

Many in the alt-right are becoming more aware of their reputation and influence. On 8chan's /pol/, whose ideology could be defined as more fascist than conservative, users squabbled over how Clinton would perceive them in the wake of the hack.

"When she invariably calls the alt-right racist, we need to frame this as old-fashioned," one user argued.

"But we are racist, you stupid PR cuck," another responded.

On Twitter Tuesday, author and conservative hero Mike Cernovich said he was excited for Clinton's speech, calling it a "massive recruiting drive" — a chance for the movement to grow even stronger.

We call it hate; they call it trolling

The alt-right lacks a central hub (or any organization whatsoever), but what unites its legions of trolls is a hatred of political correctness, a love of memes and internet culture, a drooling idolatry of Donald Trump and a smug unwillingness to be taken seriously by anyone looking in.

On alt-right forums, hate speech is passed off as "shitposting" — purposeful offensiveness meant to shock and provoke, a counterweight to calls for safe spaces and trigger warnings. They react to news articles about them with glee, mockery and disbelief that anyone could take their racist invective at face value.

If you're offended by the alt-right's hate speech, that's exactly the point. The scene is a mix of ostensibly earnest white supremacists, who, as Mic reported in June, routinely target Jewish writers for harassment, working alongside trolls who simply love the act of offending, for whom terrorizing a black woman off Twitter is a fine art, as entertaining as the internet gets.

So why is the alt-right so singularly obsessed with destroying Leslie Jones?

"It's hard to explain the obsession of the alt-right and other racists with Leslie Jones, but it presumably has something to do with the fact that she is a proud black woman who had the temerity to be part of a remake of a film originally dominated by white characters," the Southern Poverty Law Center's Mark Potok said in an email. "To the racist right, this is apparently some kind of dire threat to Western civilization, and they've reacted in their typically thuggish ways."

In other words, as an outspoken black comedienne who represents the changing face of American culture, Jones — and the success of women like her — is feared and hated by anti-PC internet trolls.

This "dire threat" represents the kind of fear Donald Trump continues to stoke in America, Hillary Clinton noted in a Reno, Nevada, speech that admonished the group. "From the start, Donald Trump has built his campaign on prejudice and paranoia. He's taking hate groups mainstream and helping a radical fringe take over one of America's two major political parties."

And as the once-underground movement enters the public eye, we've got an unparalleled view of the unbridled hate that distinguishes it.