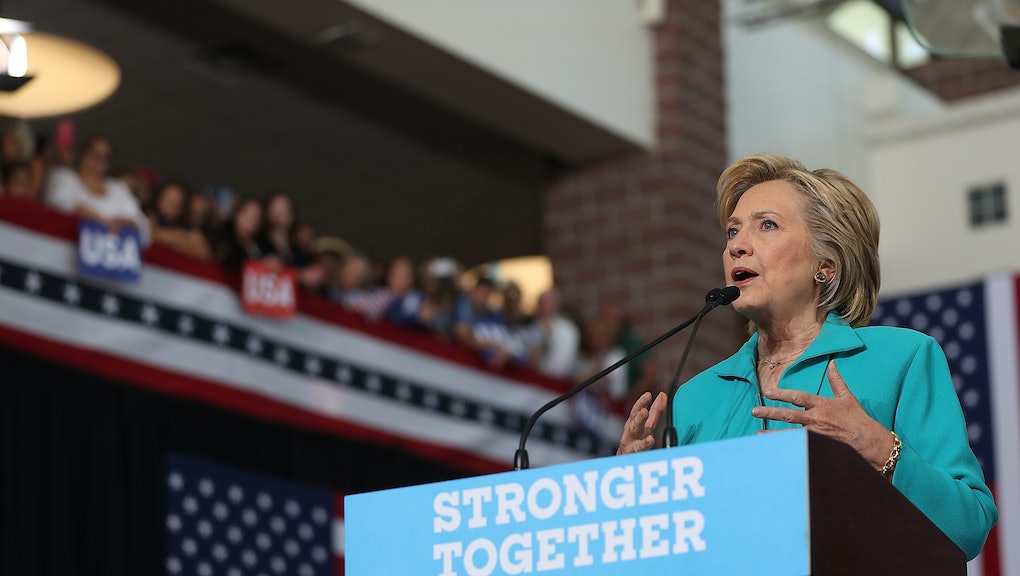 Hillary Clinton on Thursday brutally ripped into Donald Trump, decrying the Republican presidential nominee for running a race based on "bigotry" and "divisive rhetoric."

While Clinton's scathing critique of Trump likely fires up her own base, her remarks were unmistakably geared toward Republicans and independents.

Even as Democrats in the House and Senate seek to tie Republicans to Trump, Clinton instead sought to draw a distinction between him and the Republican Party as a whole, saying he has made a mockery of the "Party of Lincoln."

She gave favorable shout-outs to three previous GOP nominees — Bob Dole, George W. Bush and John McCain — whom she insinuated would be appalled by Trump's rhetoric.

It was a move Republican strategists say was meant to give Trump-wary Republican voters an argument to ditch their party's controversial nominee at the ballot box in November.

"The speech was not directed at Democrats," said Reed Galen, a longtime Republican strategist and McCain's former deputy campaign manager for his 2008 bid. "It was definitely directed toward moderate Republicans who are uncomfortable with Trump and independents who are still undecided."

A speech tailor-made for Trump-wary Republicans: Clinton has been a prime Republican target for the majority of her time in the public eye; she would have plenty of people cheering her on if she'd chosen to excoriate them.

But praise them she did in her speech, saying previous GOP nominees nobly rejected the kind of divisive rhetoric Trump has employed in his time as a candidate:

Twenty years ago, when Bob Dole accepted the Republican nomination, he pointed to the exits and told any racists in the party to get out. The week after 9/11, George W. Bush went to a mosque and declared for everyone to hear that Muslims "love America just as much as I do." In 2008, John McCain told his own supporters they were wrong about the man he was trying to defeat. Sen. McCain made sure they knew – Barack Obama is an American citizen and "a decent person." We need that kind of leadership again.

Clinton also defended GOP Sen. Ted Cruz — one of the most staunchly conservative Republicans in Washington, and one who openly delights in attacking Clinton.

"He suggested that Ted Cruz's father was involved in the Kennedy assassination," Clinton said of Trump. "Perhaps in Trump's mind, because he was a Cuban immigrant, he must have had something to do with it. Of course there's absolutely no evidence of that."

Why her strategy could could work: Clinton currently holds a solid lead over Trump in the polls — even weeks after the party conventions wrapped up in July.

That lead is thanks, in large part, to Trump's inability to unite even the Republican base, much less gain traction outside the GOP.

While multiple polls show Clinton garnering more than 90% of Democrats, Trump is hovering in the low 80% range of support from his own party.

Signaling that Team Trump is buckling down for a professionally run race could help wary Republicans fall in line behind their nominee.

But Clinton's speech served as a searing reminder of the reasons moderate Republicans didn't like Trump in the first place.

And, since Clinton deliberately didn't tie all Republicans to Trump, she offered them a rational argument for looking to her as perhaps not a perfect ideological match, but someone interested in putting progress before partisanship.

Galen added that Clinton's detailed takedown of the alt-right movement championed by Breitbart import Stephen Bannon could also have an "ancillary effect" — driving turnout among black, Latino and Asian Democrats with a stark reminder to them that if Trump wins, "these are the people who got him there."