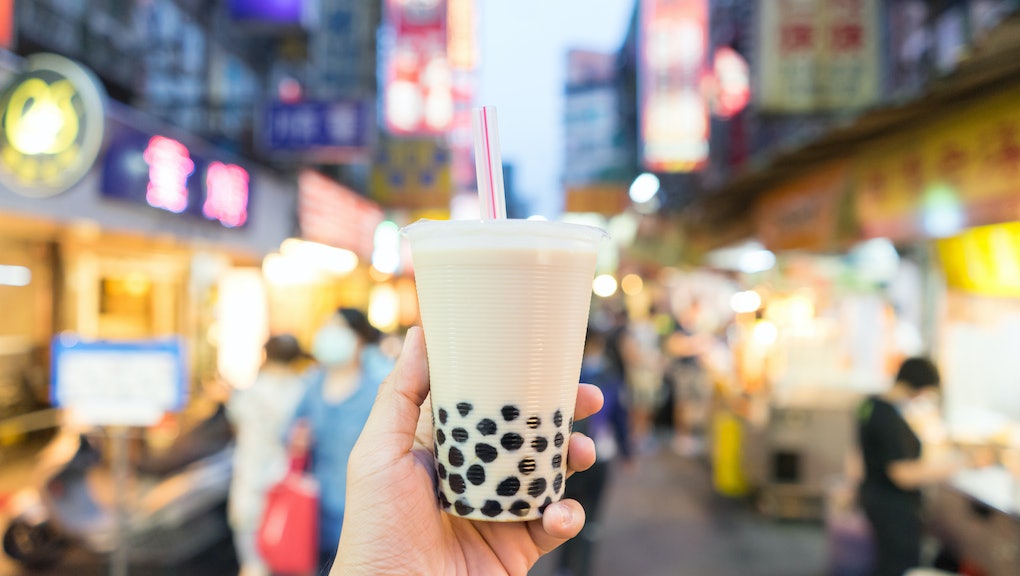 So what is bubble tea, exactly? Everything you need to know about the drink and boba balls

Contrary to its name, there are no bubbles in bubble tea. There isn't always tea, either. Even so, people are obsessed with the drink that features a base made from tea, fruit, coffee or milk and chewy "pearls" at the bottom of the cup.

Bubble tea can be found nationwide, from mall food courts to the drink menus of high-end restaurants But its origins are in Taiwan. And while the drink is wildly popular, bubble tea — or boba tea as it is also frequently called — still remains a bit of a mystery.

So why the name bubble tea?

The drink has a number of monikers, including pearl milk tea and tapioca tea, but it's most commonly referred to as bubble tea or milk tea. The term "bubble tea" is actually a reference to the milk froth that forms when the drink is shaken, not the chewy pearls in the drink that resemble bubbles, Quartz noted. The name "boba," on the other hand, originates from a Taiwanese slang term for the pearls.

What exactly are the pearls made out of?

Not old tires and shoes, that's for sure. These bubble-like pearls, the defining feature of the drink, are actually marble-sized balls of tapioca, the Daily Meal noted. (Tapioca is a starch that is extracted from cassava root that is naturally gluten-free and typically made into flour and edible pearls, the Huffington Post reported.)

The raw tapioca pearls, which are often black but can also be transparent or white, get cooked in boiling water until they become soft. They pearls are then kept in a simple syrup mixture so that they become sweet and remain chewy until they are ready for use, the Kitchn wrote.

The cooked pearls are then put in the bottom of a cup and then filled with various chilled drinks like fruity teas, icy smoothies or milk-based tea and coffee beverages as well as ice. The drink is then shaken to mix the ingredients and sealed.

The cooked pearls on their own are chewy but relatively flavorless. They become much sweeter after being soaked in simple syrup. But the real flavor comes from the drink itself — the pearls are more there for texture.

Bubble tea doesn't always have the tapioca bubbles, however. Other add-ins, like grass jelly (which has an herbal taste), pudding (yep, that thick custard-like treat) and even aloe vera can make its way into the beverage, Spoon University noted.

Those looking for the classic drink experience, however, should start with the tapioca balls so that they can have their drink and chew it too.

Are the tapioca pearls healthy?

The chewy balls aren't wildly high in calories: A 1.1-ounce serving of uncooked pearls contains 68 calories (drinks typically contain anywhere from 1 to 2 ounces of the tapioca pearls). But because the pearls are typically soaked in a sugar mixture, their calorie count increases. Plus, they're rarely consumed without the addition of calorically dense bubble tea drink.

More concerning, some say the tapioca pearls contain cancer-causing substances. A 2012 study conducted by researchers in Germany found that the pearls may contain traces of a carcinogenic chemicals called as polychlorinated biphenyls, the Huffington Post noted. This issue has been debated, though: the Taiwan Food and Drug Administration refuted the claims and questioned the authenticity of study.

So who first put tapioca pearls in sweet liquid and called it a drink?

The delightfully chewy drink originates in Taiwan. In the 1980s a beverage visionary decided to put the pearls into a cup of sweetened iced tea, NPR reported. A number of tea companies claim they invented the beverage, but credit is frequently given to Liu Han Chie, the owner of Chun Shui Tang teahouse in Taichung, according to the Daily Meal.

The drink quickly became popular across Asia, Quartz reported. It took off in the United States in the late aughts, according to NPR in major cities, college campuses and places with large Asian populations. Now, boba is practically inescapable — not that that is a bad thing.

This article was originally published on Sep. 1, 2016