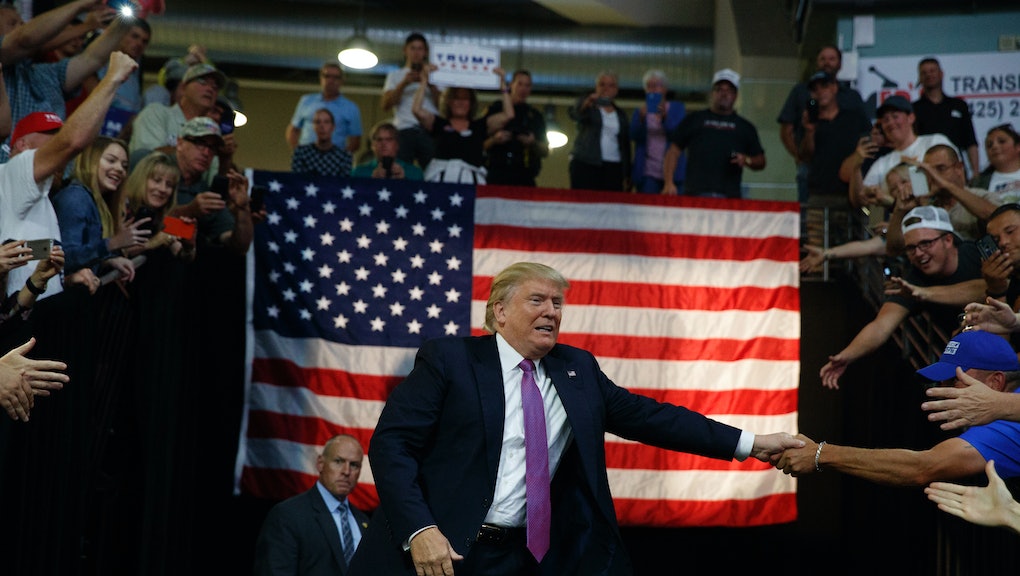 What are the chances Donald Trump will win the 2016 election? Here's what the numbers say

There are no shortage of groups, media outlets and pundits who will tell you what to expect in November, and sorting through what matters and what's attracting clicks, can be difficult.

Some metrics give Donald Trump a chance. Most predict Hillary Clinton will bring home an Electoral College landslide. If the self-described billionaire has shown us anything, it's that he can come back from fatal political missteps. But most traditional predictors of who will win the White House say Trump will spend 2017 atop Trump Tower, not in the Oval Office.

This favorite question of American pollsters, "Do you view the candidate favorably or unfavorably?" can predict how motivated voters are to support a candidate. Despite all his controversies, Trump has maintained a historically low percentage of voters who view him positively. Trump's "high-point" came just after the conventions, when only 57% of Americans viewed him unfavorably.

Some recent polling shows Trump clawing back, with a new ABC News/Washington Post poll showing 60% of voters view him negatively and 37% view him favorably.

It's hard to overstate how historically awful these numbers are. In the ABC/Post poll, the only major-party presidential candidate to come close to these numbers was George H.W. Bush. He was viewed unfavorably by 53% of the country in July 1992, before losing his reelection bid. At 56% Clinton's unfavorability rating is also historically bad. But compared to Trump, that number feels positive.

Even if Trump has a high unfavorability rating, voters may be so distrustful of Clinton they will vote for him anyway, right? At this point, not by enough. Large majorities of Americans have consistently said they do not trust Clinton. But they've also said the same about Trump. And since the political conventions, a wide margin has opened between Clinton and Trump.

With polling sometimes volatile and not always predictable, a number of groups and news outlets offer projections for who will win the election. No surprise — Trump fares poorly in these ratings too. FiveThirtyEight gives Trump around a 30% chance of winning. The New York Times is less generous, giving Trump a 13% chance of victory. And compared to where Republican nominee Mitt Romney was in 2012, Trump is in trouble.

Sabato's Crystal Ball at the University of Virginia predicts Clinton will win 348 electoral votes, including states like North Carolina and Iowa that Romney won in 2012. The Crystal Ball correctly forecast all but two states in 2012.

Trump supporters often credit him with bringing more voters into the Republican party. He did receive more primary votes than any other GOP presidential nominee. But because general election voters are far more diverse and numerous than primary voters, Trump faces several major challenges in November.

Half of Americans view him as racist and only 7% of African-Americans view Trump favorably. Hispanic immigrants oppose Trump by a wide-margin, while a majority of U.S.-born Hispanics support Clinton. And while relatively few minority voters support Trump, the Republican presidential candidate is not expected to win this constituency.

Trump's biggest problem may come from his lack of support among women. A Pew Research report in July showed a 16-point gap between Clinton and Trump among women. An early August NBC poll showed that gap widening to 24-points following the conventions, with Trump's lead among men shrinking. While history shows a gender gap is to be expected between Democratic and Republican nominees, Trump is leading his party toward a historic loss among women.

No matter how one reads the numbers, the final two months of campaigning will be arduous for Trump if he cannot turn statistics in his favor.

Read more from Mic: These battleground states are where the real 2016 election race is taking place