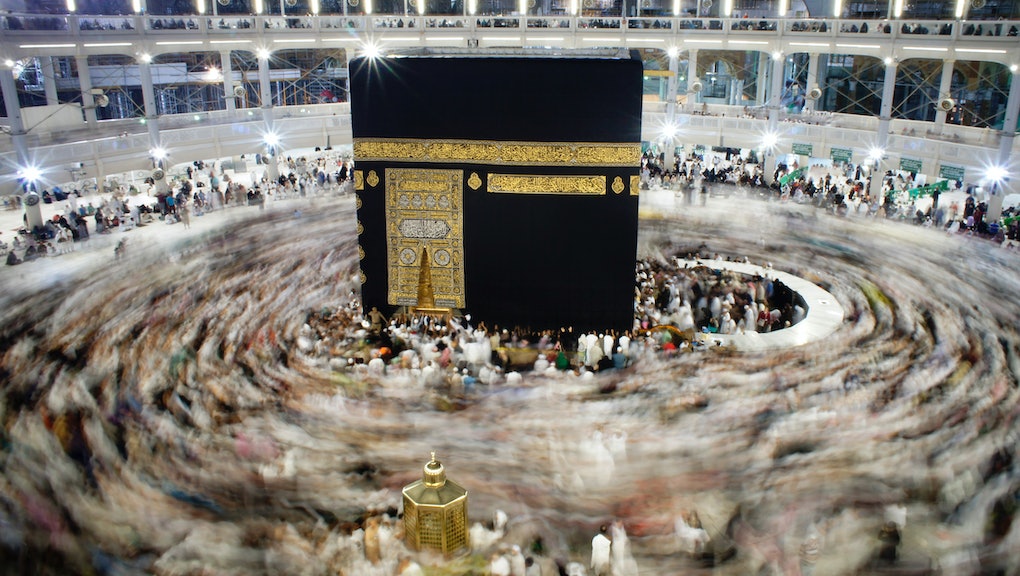 On Friday, the hajj pilgrimage begins. Here are 7 facts to keep you in the know.

Hajj is the largest annual gathering in the world. It typically aligns with the Islamic holiday Eid al-Adha, and has Muslims re-trace the footsteps of the prophets Abraham, Ishmael, Hagar and Muhammad, who migrated to the city to flee religious persecution.

Performing a pilgrimage to Mecca is one of the five pillars of Islam, a religion practiced by an estimated 1.6 billion people. It is an obligatory trip for all Muslims who are able-bodied and can afford it. According to Islamic belief, a hajj pilgrimage erases all of a Muslim's sins.

In one of many traditions practiced during the journey, pilgrims run back and forth seven times between the mountains of al-Safah and al-Marwah, imitating the prophet Hagar's struggle to find water for her infant son, Ismail. The Zam-Zam Well, from which pilgrims traditionally draw water to take home with them, is also believed to be the site where the Angel Gabriel created a spring to satiate the child, who was crying out of thirst in the desert.

The hajj is a journey rich with history, both good and bad. Sadly, in the past two years, tragedy has befallen the holy city on three separate occasions. In September 2015, more than 2,000 pilgrims died in a stampede during hajj; a crane collapse killed 207 people right before the start of the pilgrimage that same month. More recently, in July, a suicide bomber believed to have ties to ISIS detonated his explosive vest in the parking lot of Muhammad's sacred burial ground, killing four security officers and injuring five other people.

But despite these unfortunate incidents, more than 2 million Muslims from around the world continue to perform their yearly hajj pilgrimage. Here are seven facts you need to know about the journey:

The hajj pilgrimage will start Sept. 10 this year, and lasts for five days. The beginning of the pilgrimage, like Ramadan and Eid al-Adha, is determined by what phase the moon is in.

Indonesia is the country with the most pilgrims who attended hajj in 2015.

According to IlmFeed, a Muslim news site geared toward millennials, the Saudi Press Agency estimates there were 2 million hajj pilgrims in 2015. Of that number, 1.3 million reside outside of Saudi Arabia, while 888,165 visited by plane, 12,802 by car, train or foot, and 8,637 via boat or ship.

Some of your favorite celebrities performed hajj.

Muhammad Ali, Mike Tyson, Shaquille O'Neal and Husain Abdullah have all performed hajj at one point. Paris Hilton has not, but ignited an internet firestorm in 2007 when she announced her newest retail store would open in the Mecca Mall — right around the corner from the hallowed Grand Mosque.

Hilton's store is the fifth retail location in Saudi Arabia. For those scratching their heads, Saudi law does not restrict companies and buildings from opening in the kingdom. Gucci, Louis Vuitton and Victoria's Secret are all popular stores there.

Mecca is a city reserved only for Muslims, for security and religious reasons, but there has been no word on whether Paris Hilton converted to Islam, or actually visited the holy city.

According to Islamic tradition, the Kaaba was rebuilt by Prophets Abraham and Ishmael.

In the Quran, the Kaaba — the most sacred site in all of Islam — is referred to as the first "house of God" on Earth. After being ordained by Allah, Adam, the first man, built the earliest version of the stone structure on the site where angels allegedly worshipped God before the creation of mankind.

The Kaaba was intended as the first Muslim house of worship. Many religious scholars claim the Christian Bible's Book of Genesis acknowledges its existence as well, depending on different interpretations of the text. According to the Quran, a flood destroyed the Kaaba during the time of Noah, after which Abraham was ordered by Allah to re-build it with his son, Ishmael.

It would not be the first time a natural disaster would harm the building. After another flood destroyed the Kaaba around 600 C.E., Muhammad took part in its reconstruction. It is around this time that a polytheistic Meccan tribe, the al-Quraysh, filled the house of worship with idolatry (the Ka'aba was a popular site for pagan and monotheist pilgrims alike).

After defeating the al-Quraysh army and surviving their persecution, Muhammad removed and destroyed all idols in the Kaaba except for two: a painting of Mary with her baby, Jesus and one of Abraham. He raised his hands to protect them while the other items were smashed.

Islamic tradition also states an angel brought a black stone down from heaven to embed in the mosque. It is believed this black stone is the only remaining piece of Abraham's original construction, and to this day, pilgrims touch and even kiss it. It is still part of the building today.

There is no gender segregation at the Grand Mosque in Mecca.

In private businesses in Saudi Arabia, like Burger King and Starbucks, it's not uncommon for proprietors to segregate guests based on gender. Restaurants are often split into men's, women's and family seating sections.

In the Grand Mosque, however, there is no gender separation. Men and women pray side-by-side, shoulder to shoulder. In an op-ed for the Hurriyet Daily News, Mustafa Aykol, a prominent Turkish journalist and writer, says this proves gender segregation isn't a core practice of Islam. In fact, there is not a single decree in the Quran that calls for the separation between men and women in public places.

Aykol argues instead that the separation of the sexes — often considered a key part of "Muslim culture" — isn't rooted in the Quran or Allah at all. Rather, it is a practice coined by men during the Byzantine and Persian imperial eras. Hajj, and the policies of the Grand Mosque, are a living reminder of this.

Before Muhammad sanctified the Kaaba, early Muslims would pray toward Masjid Al-Aqsa (the Dome of Rock mosque) in Jerusalem.

The qiblah, or the direction Muslims face when making their five daily prayers, was initially centered on the Al-Aqsa mosque in Jerusalem. The historical significance of Al-Aqsa stems from a Hadith — an oral account of the words, actions and habits of the prophet Mohammed transcribed to written text — that says the Dome of Rock was the second mosque on Earth.

Abu Dhar al-Ghifari, believed to be the fourth or fifth to convert in Islamic history, said in one of the Hadith collections known as Sahih Muslim:

It wasn't until more than a year after the First Hijra — a forced migration the prophet Muhammad and his followers undertook to escape persecution — that God commanded the Prophet Muhammad, through Angel Gabriel, to direct their prayers towards the Kaaba in Mecca.

Iran is prohibiting its citizens from performing hajj this year.

Iran's population is overwhelmingly Shia Muslim, while Saudi Arabia's interpretation of Islam falls closer to Sunni Wahhabism. The result is a set of deep-seated theological and political divides between the two countries that has lasted for decades.

Their relationship was further strained in January, when Saudi Arabia executed prominent Iranian Shia Cleric Sheikh Nimr al-Nimr for, according to BBC, "seeking 'foreign meddling' in [Saudi Arabia], 'disobeying' its rulers and taking up arms against the security forces." Iranians in Tehran responded by storming the Saudi embassy in protest.

After the attack on their embassy, the Saudi government broke off all economic and diplomatic ties with Iran. Iran responded by banning Saudi imports and prohibiting Iranians from performing the hajj pilgrimage. Iranian leaders also questioned Saudi Arabia's competence (or complicity) in handling the tragic stampede during the hajj that killed over 2,000 people — and over 450 Iranians —  last year.

It's heartbreaking and unfortunate indeed that Iranian citizens have been denied this sacred and rewarding religious experience due to the mutual enmity of their governments.