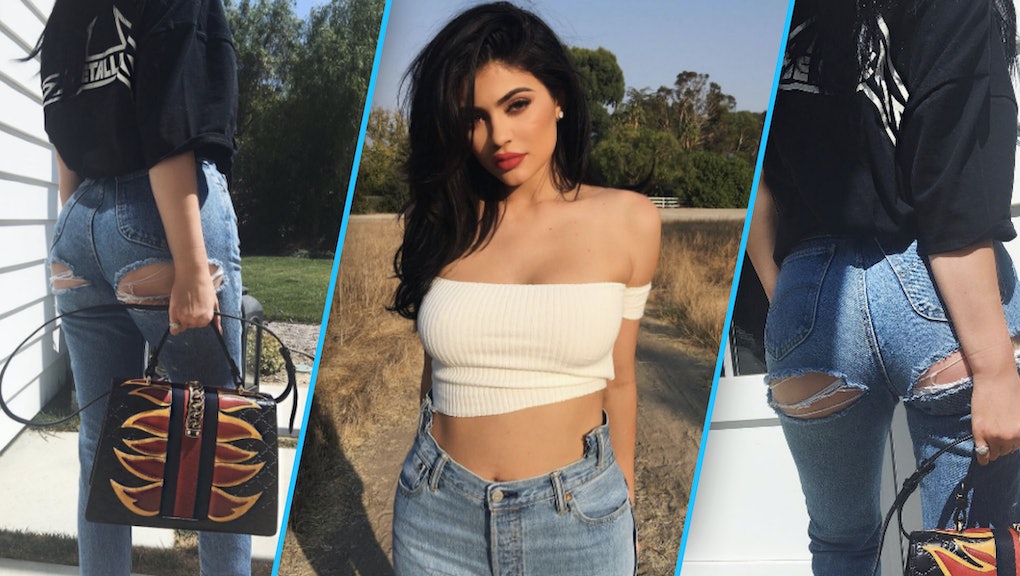 On Tuesday, Jenner posted two pictures on her Instagram of her backside in a pair of jeans with two long rips along the bottom of her butt.

She was pretty blasé about it. The pictures were left sans caption, as if to say, "Nothing to see here, guys."

And yet, between the two pictures, they've been liked more than 2 million times.

Over on Twitter, her fans have been, let's say, mystified.

And the media has been, let's say, mostly concerned.

Seventeen magazine even sent one of its writers to try out similar hole-y jeans in the real world. "Walking around the Seventeen.com office with two patches of bare skin under my butt was terrifying," Seventeen's Hannah Orenstein wrote of the ordeal. "I heard one person actually laugh out loud when I walked by."

The magazine also launched a Twitter poll, asking its readers if they would ever wear these jeans. An overwhelming number of responders responded: "Only if you're Kylie."

But here's the thing: There's nothing really wrong with Jenner's jeans. They're not a criminal offense. It's not like she's baring something that we wouldn't see if she posts a picture of her bottom in a bikini.

It's just a little tush.

It's just a little cheek.

Although Jenner has done plenty of problematic things in the past, this is not one of them. There is no need to worry, no need to scream. It's not like Jenner is even launching some new trend, since there are already tutorials on how to rip the butt of your jeans on places like YouTube. Plus, plenty of jeans already come readymade with rips across the bum. Like, here is a pair for $54 and here is another for $79.

Jenner isn't launching some trend or making a grand statement. She is merely buying a pair of jeans and wearing them.

She and the bottom of her butt cheeks are fine, whether they remain exposed or not. She is merely, you know, showing off what she wants to show off.

So, now that we have that settled, let's run through a list of activities that Jenner or anyone interested in these types of jeans should avoid.

1. Sitting down in the grass

2. Sitting down in mud or dirt

3. Sitting down in sand

4. Sitting down in an ant pile

5. Sitting down on a very cold chair

6. Sitting down on a very hot chair

Other than that, feel free to bare your bum any way you'd like, Jenner.