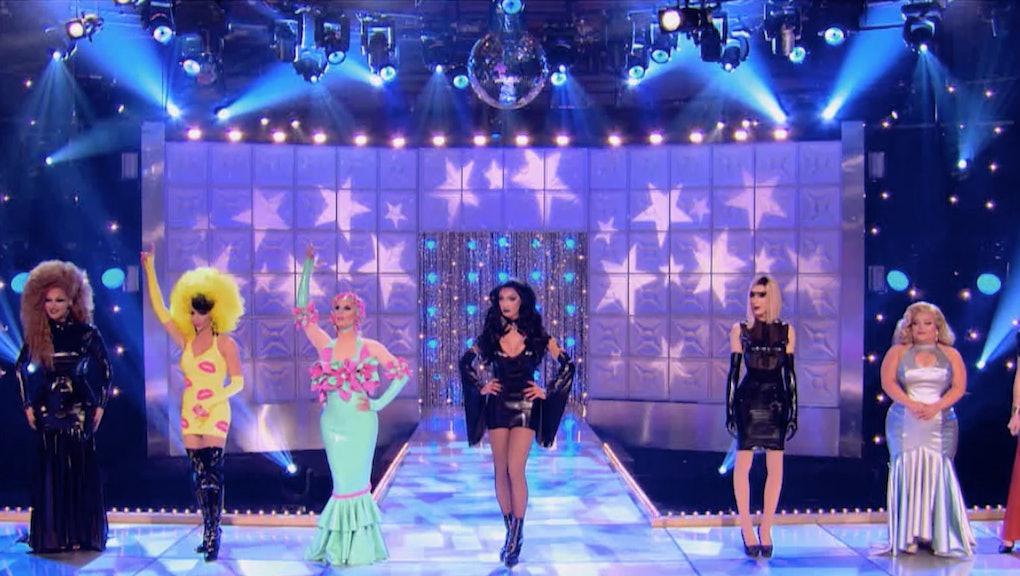 If RuPaul's Drag Race is indeed "the Olympics of drag," then Snatch Game is the main event. The seasonal challenge, one of the only that has appeared in every season since the second, requires that all of Drag Race's best and brightest to put on their best celebrity drag and do an impersonation in a wacky twist on the classic game show Match Game.

The challenge is a favorite because it separates wheat from chaff. But in RuPaul's Drag Race All Stars, it has the added bonus of giving those queens who failed at Snatch Game in their seasons the chance for redemption. As Katya puts it, "Alyssa, Detox and Phi Phi have a lot of work to do."

But before Snatch Game can even commence, RuPaul asks a crying Adore Delano what's wrong. Head judge Michelle Visage's harsh critiques of Adore during the All Stars premiere are clearly getting to the season six finalist, who spends most of her time on this episode visibly distraught. Michelle's dismissal of Adore's grunge-girl aesthetic is getting in the young queen's head.

"I'm thinking of going home," she tells Ru. "The critiques last night, and the vibes... It means a lot to me to just stick to my guns. I know how hard it took for me to gain that confidence and own my stardom like you taught me to."

After a heart-to-heart with Michelle, and much pleading from the other queens to stay, Adore chooses to leave — making her the first queen in Drag Race herstory to do so — bringing the number of remaining queens to eight.

But this is All Stars, and the show must go on. Another queen goes home at the end of the episode. Who gets the chop, and which queen sends her packing? Let's break it down by doing our own ranking of the eight Snatch Game performances, from worst to first.

Roxxxy's take on Alaska, Sharon's ex-boyfriend and current All Stars contestant, is much more Max-as-Sharon than Violet-as-Alyssa. It's a misfire from conception, a last-minute choice after Phi Phi O'Hara convinces Roxxxy her original idea, a Sofia Vergara impression, is a bad idea. We'll never know how Roxxxy's Sofia would have been, but surely it would have been better than her all-wrong Alaska.

That said, Alaska's expressions while watching Roxxxy are pure gold.

Oh, Tatianna. She won the first-ever Snatch Game as Britney Spears, setting one standard of what a great Drag Race celebrity impression is. But her take on Ariana Grande, while perfect in look and voice, still misses the mark. She whiffs at nearly every opportunity for a joke — and Ru pitches her softballs, too. Plus, she broke character, a major no-no.

The impression lands her in the bottom three (alongside Roxxxy and Detox), and she seems deeply disappointed in herself. "I'm sorry," she says, tearing up. "This means so much to me, and I fucked it up."

Phi Phi lands in the top three for her performance as Long Island medium Theresa Caputo, and it's a little confusing as to why. She gets a few good jokes in about Caputo's dubious gifts, but it's a bit one-note. The impression is formulaic — same joke, barely interacts with the other queens and requires little-to-no creativity. She's not bad, but she's certainly not top three-worthy.

To be fair to Phi Phi, a lot of Detox's Nancy Grace is also formulaic: jokes about Casey Anthony and child protection, nothing Saturday Night Live hasn't done before. She also, like Tatianna, breaks character, which is probably what lands her in the bottom three.

But Detox is really trying, and her Nancy Grace is a marked improvement on season eight queen Acid Betty's attempt. She attempts to mix it up with the other queens, varies up her punchlines and gets the voice right. It's not a great impression, but it's the best of the worst.

Ginger, on the other hand, is the worst of the best, and it's really only because of her limited screen time is relative to the rest of the top queens. Her Tammy Faye is a gentle take on the late weepy evangelist, which keeps it from sticking in the mind as much as her winning take on Adele in season seven. Still, she gets the character, and she gets more than her fair share of laughs.

Let's get this out of the way: Alyssa isn't going to win any awards for portraying Joan Crawford. The entire impression is way too catchphrase-based, and Alyssa's voice never really gets there. That said: Her impression is hilarious.

Alyssa's a superstar, and this Snatch Game proves why. In her season, she was nervous and quiet as Katy Perry, only saved from the bottom two because she had immunity. This time around, she gives herself over to the impersonation. Every joke is delivered with full force of intention. It's a comic tour-de-force, and despite being pretty un-Crawford, it keeps her out of the bottom three.

Is she the funniest queen on the stage? Not really. None of her jokes get Ru laughing the way any of Katya's do. But the characterization is flawless, and that's what lands her in the top two.

Katya's Björk characterization is not quite as personal an invention as Alaska's Mae West is — it's basically Kristen Wiig's take from Saturday Night Live. This is cause for some concern, since Katya liberally borrowed from Wiig's Suze Orman impression for her season seven Snatch Game performance.

But while Katya loses on the innovation front, hers is the funnier performance of the top two. Her jokes all land, and she brings the commitment to quirkiness required while playing the Icelandic musician. At one point, she starts eating one of the Snatch Game cards. It's that kind of dedication that makes her the clear winner.

Yet this is All Stars, so the top two must lip-sync for their legacy. Tatianna worries during deliberations — she's in the bottom two with two members of former season five gang Rolaskatox. If Alaska wins the lip-sync, Tatianna notes, she's not going to send home her friends.

Unfortunately for Tatianna, her exact fear is confirmed: Alaska wins, and sends home Tatianna. But just like Coco Montrese the previous week, Ru appears to Tatianna via video to bring good tidings: Tati's time on All Stars isn't over yet.

What does this mysterious, recurring twist mean? And who will be next to go? The next episode airs next Thursday at 8 p.m. Eastern on Logo and VH1.