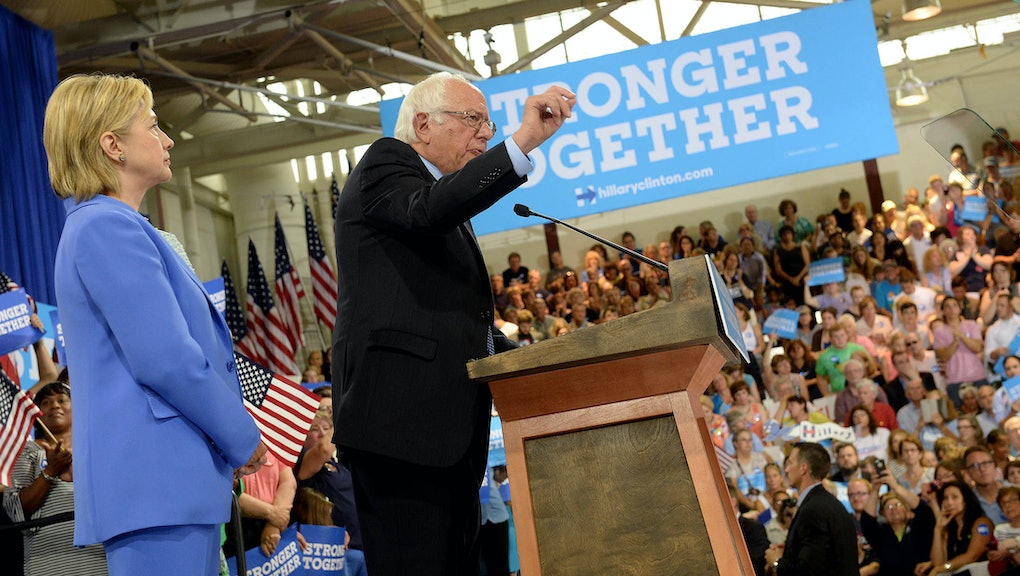 The Granite State is about to Feel the Bern.

Bernie Sanders will hit the campaign trail for Hillary Clinton on Monday, marking the first time the Vermont senator has stumped for her at a major event since she claimed the Democratic nomination in July.

Sanders electrified legions of young, left-leaning voters with his underdog crusade, and the official advisory for his upcoming appearance pointedly echoes the language that made him so popular.

"Sanders will discuss Hillary Clinton's plan to building an economy that works for everyone, not just those at the top, and Donald Trump's plan, which would benefit himself and other millionaires and billionaires," the memo reads.

Even as Clinton accepted the party's blessing after a hard-fought primary, some Sanders backers vowed to write him in or go with a third-party candidate such as the Green Party's Jill Stein, arguing that Clinton was too centrist a politician for their tastes.

Polling has showed Sanders backers shifting toward supporting Clinton in healthy numbers, but not all were convinced even after the conventions.

The Monday appearance demonstrates that the progressive-minded senator is actively pushing the Clinton message rather than focusing solely on his "Our Revolution" organization, which is focused on electing liberal down-ballot candidates.

The latest RealClearPolitics polling averages show that in a four-way race including Stein and Libertarian nominee Gary Johnson, Clinton leads Republican Donald Trump by less than four percentage points. In a head-to-head matchup, Clinton's advantage is closer to five points on average.

Sanders has previously encouraged his followers not to forsake Clinton for one of the other alternatives, but now he'll be following that up by hitting the bricks — and the choice of New Hampshire as the place to do so is more meaningful than just providing Sanders with a short commute.

The once-dueling campaigns chose the first-in-the-nation primary state for the senator's formal endorsement of Clinton ahead of the Democratic National Convention, so Monday's stumping destination gives a coming-full-circle feel to the day.

The event kicks off at Lebanon High School at 2 p.m.