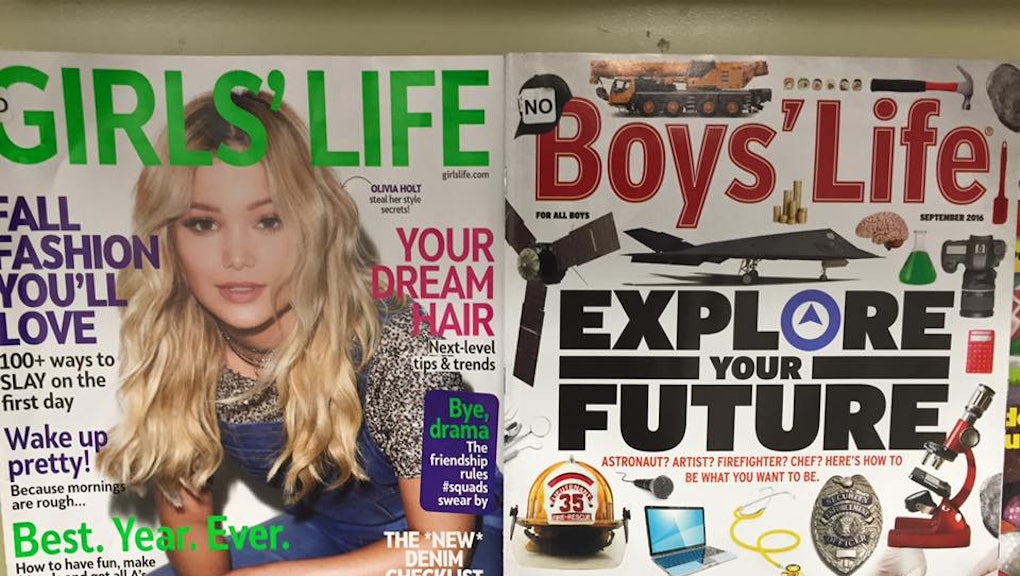 Two magazine covers, sitting side by side, reveal sexism is alive and well in 2016

One might not expect the contrasting covers of Boys' Life and Girls' Life, two magazines aimed at pre-adolescents, to spark a conversation about the patriarchal ways in which our country both situates and normalizes gender divides, but then again, we live in a world with Swedish fish-flavored Oreos, so the term unexpected carries no real meaning anymore.

One tweet sent out by author Jennifer Wright, depicting the the two magazine covers side by-side, was launched into the viral abyss thanks to her spot-on captioning:

"Why are you feminists always complaining?" she asked sardonically. "We treat boys and girls exactly the same."

The cover of Girls' Life, features such headlines as "Wake up pretty!" "My first kiss" and "Your dream hair." Almost as if strewn together from the Tumblr of a privileged Manhattan debutante's bored step-child, another headline reads "Best. Year. Ever." promising a three-pronged guide to having fun, making friends, and, of course, getting A's. Suffering from acute or obtuse cases of drama? Another article, "Bye, drama," promises to offer the friendship rules squads swear by.

"Our content of the entire magazine is for our audience and our audience has the same interests which is learning how to be the best version of themselves and that extends far, far beyond beauty and clothes and hair, which they know, because they read the whole magazine," Karen Bokram, Girls' Life's founding editor and publisher, said in an interview. "That's impossible to tell when you don't go past the surface. And we all know what happens when people judge a book by its cover."

Reductive as these headlines might appear in terms of equipping young girls with substantive knowledge, their shortcomings are made more severe when contrasted with Boys' Life, whose cover offers only one headline: "Explore Your Future: Astronaut? Artist? Firefighter? Chef? Here's How To Be What You Want To Be."

The surrounding images — that of a police badge, a scientific beaker and a stethoscope — only underline the ways in which media outlets (and in this instance, one explicitly directed at adolescents) celebrate the possibilities of manhood, while reducing womanhood to quaint aspirations, often image-based.

But I wanna be a scientist vet cop pilot!" one commenter tweeted back at Wright. "Well you CAN'T," Wright responded, "but you CAN have 100 pairs of denim or something." The joke lands, but it brings with it a thudding reality that sexism is alive and well in 2016.

Mic has reached out to Boys' Life for comment and will update the piece when we hear back.