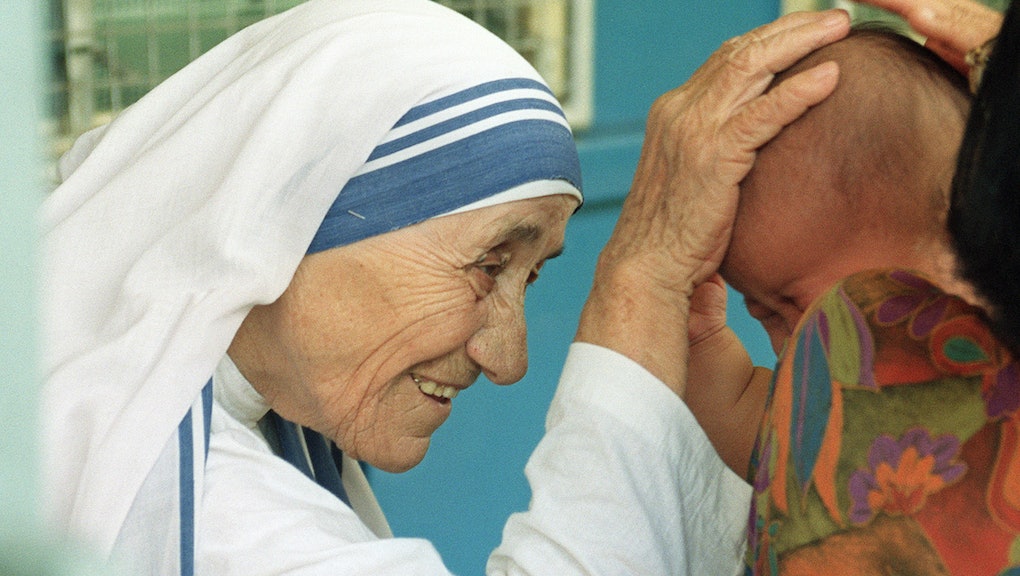 Despite her problematic history, Mother Teresa has been granted Catholic sainthood

What do you do when the paragon of saintliness is no saint at all?

If you're the Catholic Church, you canonize her anyway; that's what Pope Francis did Sunday morning, standing before a crowd of thousands in Vatican City to announce the missionary formerly known as Mother Teresa had officially become "Saint Teresa."

"Today, I pass on this emblematic figure of womanhood and of consecrated life to the whole world of volunteers: May she be your model of holiness," Francis said, according to the New York Times.

There's a problem with the Pope's starry-eyed characterization: Since her death in 1997, many, many articles have been written suggesting that Mother Teresa, the Catholic Church's ultimate symbol of goodness, was actually a deeply flawed figure.

Mother Teresa, born in 1910 as Anjezë Gonxhe Bojaxhiu in what is now known as Macedonia, dedicated her life to her fundamentalist Christian beliefs.

She became a nun at a young age, and in 1946 she dedicated her life to living in the slums of Kolkata among India's most destitute populations. Her work there with orphans and the sick earned her a Nobel Peace Prize in 1979, as well as the nickname, "The Saint of the Gutters."

As CNN reports, Mother Teresa's devoted supporters began pressing the church to expedite her bid for sainthood almost immediately after her death.

In 1999, a special dispensation from Pope John Paul II waived the usual five-year waiting period of formal evaluation for sainthood, allowing her beatification process to begin.

But the Catholic church's obsession with elevating the life and work of Mother Teresa is exactly why her critics have come out with such vocal condemnations of her.

Aroup Chatterjee, a doctor originally from Kolkata and the author of Mother Teresa: The Final Verdict, told the Guardian that the freshly anointed saint's problematic legacy is what makes her canonization all the more infuriating.

"Many rogues have become Catholic saints," he said. "What bothers me is that the world makes such a song and dance about a superstitious, black magic ceremony."

In his book, Chatterjee cites the testimonies of many who claim that the care that sick people received through Missionaries of Charity, the order Mother Teresa founded, was reprehensible.

According to his account, pain relief was frequently denied of the dying, and dirty conditions and reused syringes were a constant threat, despite her organization possessing more money than it knew what to do with.

The Guardian reported that Susan Shields, a former Missionaries of Charity worker, gave a firsthand report to Christopher Hitchens in his book, The Missionary Position, that the organization's money sat in bank accounts untouched rather than being put to use for the dying people it sought to help.

According to an Alternet article referencing Hitchens' book, Teresa herself had on occasion tipped her hand to reveal a callous, retrograde worldview that prioritized religiosity over humanity.

"There is something beautiful in seeing the poor accept their lot, to suffer it like Christ's Passion. The world gains much from their suffering," she reportedly once told Hitchens.

His book roundly condemned her, calling her a "religious fundamentalist, a political operative, a primitive sermonizer and an accomplice of worldly secular powers".

Of her work, he said that it was "not the honest relief of suffering but the promulgation of a cult based on death and suffering and subjection," according to the Guardian.

While Catholics around the world will celebrate the life's work of Saint Teresa on Sunday, her quiet legacy of Christian colonialism must not be forgotten.