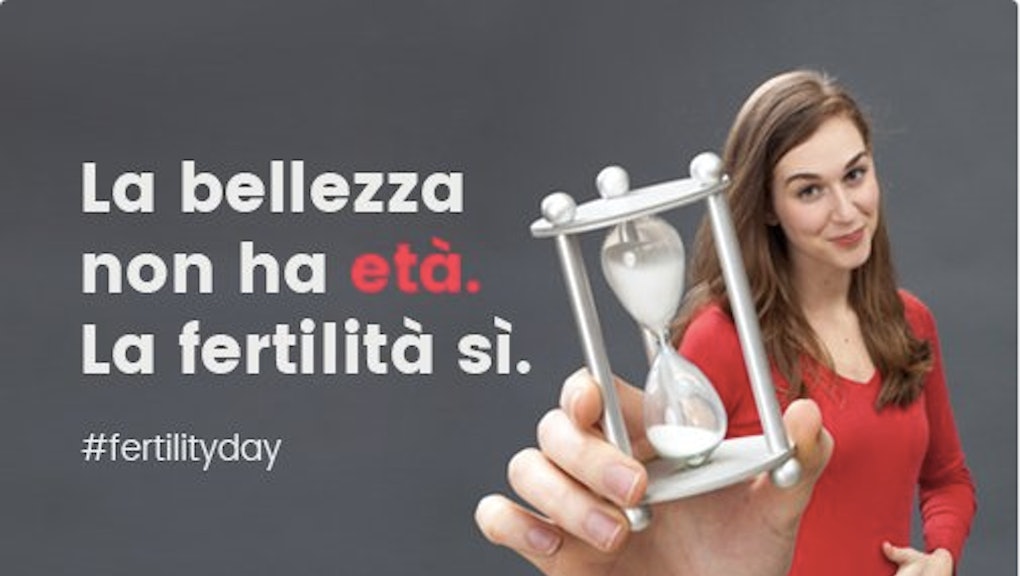 Italian #FertilityDay campaign asks women to hurry up and get pregnant, sparks outrage

A gentle reminder from Italy to its female citizens: You're not getting any younger, so maybe get on that baby-making, okay?

That's among the messages the Italian government is currently using to up its flagging birth rate. Its recently-launched #FertilityDay campaign features 12 ads that have attracted much criticism, such as the below picture of a smug-looking woman holding an hourglass.

"Beauty has no age. Fertility does," it reads.

#FertilityDay, which is scheduled for Sept. 22, is Italian Health Minister Beatrice Lorenzin's initiative, which comes as little surprise: In February 2015, when it was announced that the national birth rate was at its lowest point since 1861, Lorenzin declared Italy a "dying country."

"This situation has enormous implications for every sector: the economy, society, health, pensions, just to give a few examples," she said at the time. "We need a wake-up call and a real change of culture to turn the trend around in the coming years."

The social media campaign is presumably part of that wake-up call, one women don't seem to want to hear. Backlash has been strong.

As the Cut reported, Italy has not exactly created a climate conducive to motherhood. Its unemployment rate is high within the general population, and particularly bad when it comes to young people, whom the campaign targets. The unemployment rate among Italy's under-25 population is 42%.

Italian blogger Giulia Blasi wrote that she was invited to meet with Lorenzin before the government rolled out the #FertilityDay campaign, but declined once she saw the ads. Italy makes in vitro fertilization a difficult option for heterosexual couples and impossible for homosexual couples, she wrote.

Paid maternity is only available in jobs with "long-term contracts," Blasi explained, but even then, it's not guaranteed. According to Quartz, "hundreds of thousands of Italian women" have been confronted with dimissioni in binaco, undated resignation letters their employers oblige them to sign so that, if and when the women get pregnant, their employers can legally fire them.

"The government should not be in the business of hurrying people, but rather of giving its citizens the full range of choices, something that Italy is not currently doing," Blasi wrote. "At all."

With slogans like "fertility is a common good," Blasi explained, the government is casting the uterus as "public property." But there's enough baby shaming for everyone: Fertility Day's official Twitter account also tweeted out "The five golden rules to protect male fertility," accompanied by a picture of an old banana peel and an image of a flaccid cigarette with the subtle message, "Don't send sperm up in smoke."

Even Italy's prime minister has come out against the ad campaign. "If you want to create a society that invests in its future and has children, you have to make sure the underlying conditions are there," Matteo Renzi said in an interview, according to Reuters, adding that he couldn't think of anyone who's been motivated to make babies because an advertisement asked them to. And while Lorenzin has apologized and proposed changing the #FertilityDay message, the event itself will go ahead as scheduled.