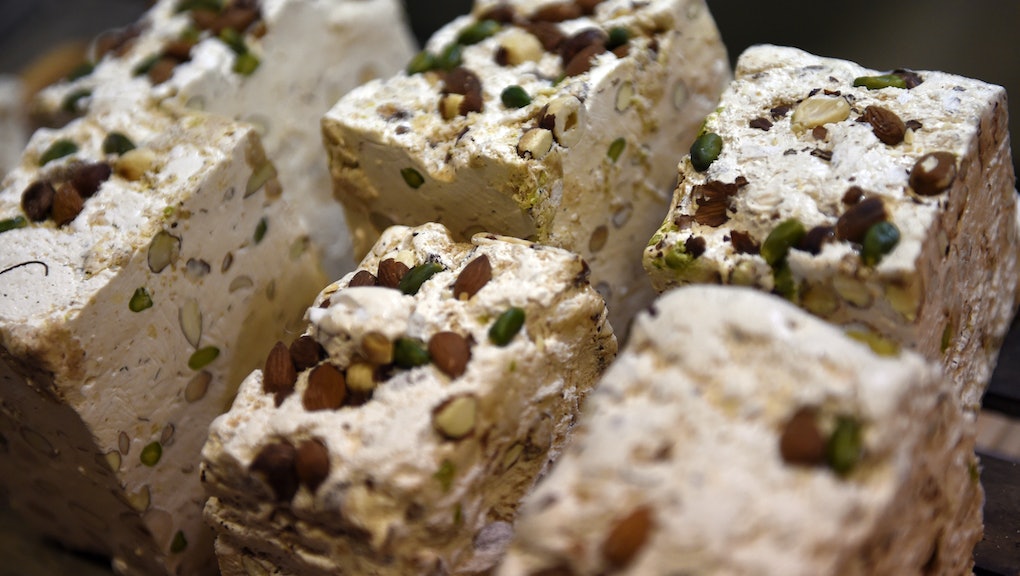 What is nougat? Finally learn what that delicious 3 Musketeers is made of.

Nougat, the stretchy, sugary center in candy bars like Snickers and Milky Ways, was mentioned several times during the second season of Stranger Things, which began streaming on Netflix last week. In episode two, trick-or-treaters had strong opinions about nougat-filled 3 Musketeers, and the scene had people on Twitter craving the candy bar.

But what is nougat, exactly?

According to the Food History Almanac by Janet Clarkson, nougat and candy (derived from the Persian word quand) were created in the Middle East back in the 8th century. Europeans also believe that nougat was created in the 15th century, when Italian confectioners whipped up the sticky creation as part of an indulgent wedding feast. Though saccharine legends and history may be inconclusive, one thing is for sure: Nougat has stuck around.

Nougat is not some magical substance, but rather an ancient (or close to ancient) candy creation that is made with basic kitchen ingredients.

"The base is egg whites and some type of sugar or corn syrup that is whisked together whilst adding air (aerating) to it," Chris Lindstedt, senior buyer at It'Sugar explained in an email. "Typically, nuts and/or fruit are added at the end of the process; most commonly, almonds are used."

The taste and texture of nougat can vary widely — just think of the difference between 3 Musketeers and Snickers.

Nougat can also be made at home by whisking egg white, powdered sugar, warm water and honey together. In terms of candy-making, it's pretty easy, and you can customize your homemade nougat by tossing in nuts before it cools or dipping the cooled nougat in chocolate.

Nutritionally, nougat, like many candies, is all sugar, carbohydrates and empty calories. Low in saturated fat and sodium, it's not the absolute worst thing for you, but it also isn't great. Around the world, sweet tooths can find variations of nougat ranging from turrón in Spain, which is more than half almonds, torrone in Italy, which is often flavored with vanilla as well as more variations on the sticky treat across the globe. Next time you bite into a nougat, at least you'll know what it is.