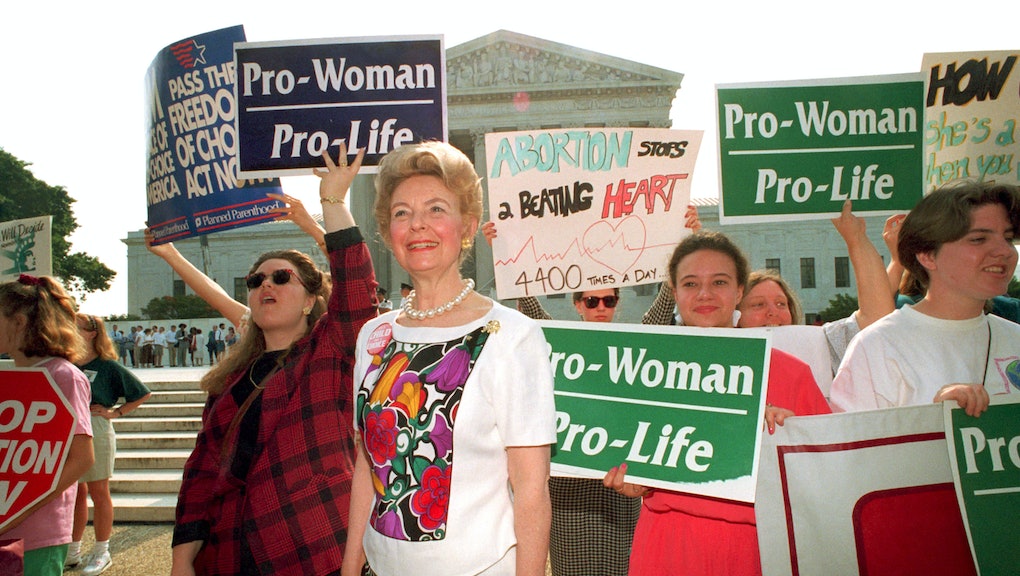 Phyllis Schlafly, who died on Monday at 92 from cancer, was the face of anti-feminism and an icon in the conservative movement for her steadfast opposition to modern feminism.

Schlafly became well known for her successful grassroots campaign against the Equal Rights Amendment — proposed legislation that guaranteed the full and equal rights of women.

Before her death, Schlafly — who endorsed Donald Trump for president in March — published a book titled The Conservative Case for Trump and that said the real estate mogul is a true conservative and one the movement should rally behind.

Schlafly was no stranger to controversial comments and statements reviling the modern feminist movement in the United States. Here are some of the worst things she said throughout her career as a crusader against women's rights.

In a feature interview with the New York Times, Schlafly said she didn't believe women needed a constitutional amendment to protect their rights.

"I simply didn't believe we needed a constitutional amendment to protect women's rights. I knew of only one law that was discriminatory toward women, a law in North Dakota stipulating that a wife had to have her husband's permission to make wine."

In response to the infamous UVA rape case, Schlafly claimed there is a "war on men."

"There is a war on men, and [feminists] are very open about it. They don't conceal it; they brag about it. You read all of their material — they're always saying they want to abolish the patriarchy. They said that husbands are not necessary in a marriage, they're not necessary in raising children."

"It's really dangerous for a guy to go to college these days. He's better off if he doesn't talk to any women when he gets there. The feminists are perfectly glad to make false accusations and then claim all men are capable of some dastardly deed like rape."

During a U.S. Senate hearing on sex discrimination in 1981, Schlafly implied that women who are not "virtuous" are likely to experience sexual harassment.

"Non-criminal sexual harassment on the job is not a problem for the virtuous woman except in the rarest of cases."

Schlafly denies the existence of marital rape in 2007.

"By getting married, the woman has consented to sex, and I don't think you can call it rape."

In 1999, Schlafly said the ERA proposal to fund abortion and provide rights to gays and lesbians were reasons to oppose the legislation.

Schlafly was also vehemently against sex education and linked it to abortion parties.

"Sex education classes are like in-home sales parties for abortions."

In 2011, Schlafly said the Violence Against Women Act was based on "false allegation" of domestic violence.

"When marriages are broken by false allegations of domestic violence, U.S. taxpayers fork up an estimated $20 billion a year to support the resulting single-parent, welfare-dependent families."