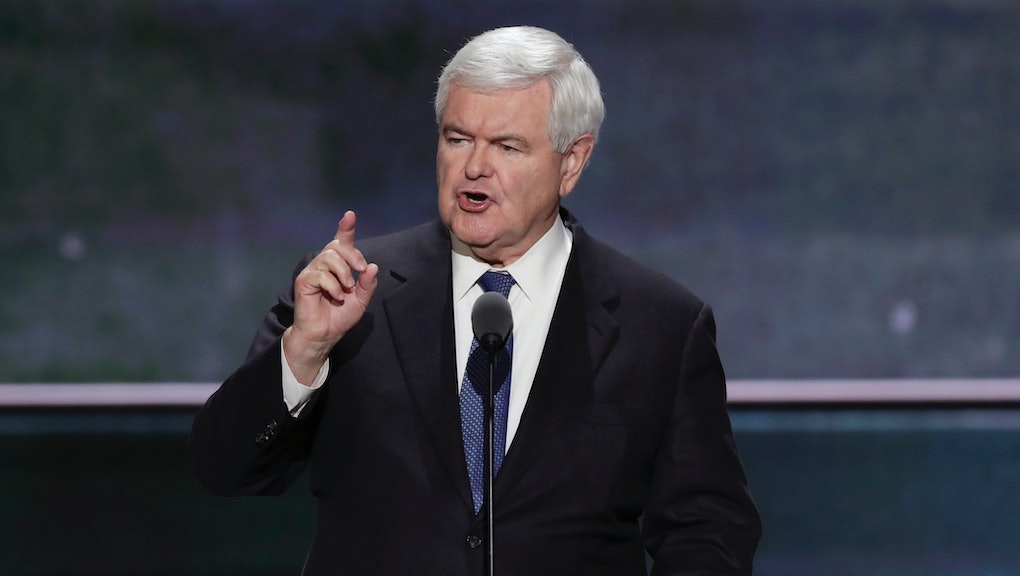 Former Republican speaker of the house Newt Gingrich appeared on right-wing media personality Sean Hannity's radio show on Tuesday to criticize Democratic nominee Hillary Clinton's health, immediately before launching into a coughing fit of his own on the air.

"This coughing stuff, I hope [Hillary's] alright," Gingrich said on the program, reported the Daily Beast. He continued, "It's a little disturbing."

Gingrich added the candidate's coughs are "deeper" and "last much longer" than those of her husband, former President Bill Clinton, and that he wondered why the nominee's doctors were not being more "aggressive" with treatment.

Hannity responded that "It lasted for four minutes and 20 seconds this weekend. I think we need to know if she's healthy."

Shortly after, Gingrich himself broke into several seconds of coughing.

"Now you sound like Hillary," quipped Hannity. "By the way, yours didn't last four minutes and 20 seconds, thank God."

"No, I'm in good shape," replied Gingrich. "At least I'm in better shape than Hillary."

Theories about Clinton's health have become widespread among conservative circles in recent weeks — despite the lack of, as the Washington Post recently reported, any credible evidence the Democratic nominee suffers from any serious or chronic health problems. Though Clinton suffered a concussion in 2012 after contracting a stomach virus, becoming weak, and falling, actual medical records released by her physicians say she is in good health.

Yet implications about whatever is supposedly wrong with the nominee have been embraced by Republican nominee Donald Trump.

Trump and his campaign have repeatedly insinuated Clinton is on the verge of death's door on Twitter and in media appearances. Surrogates for his campaign like former New York City mayor Rudy Giuliani have done the same in recent weeks as Trump has apparently decided to make attacks on Clinton's health a major focus of his strategy.

As the Washington Post's Chris Cillizza noted, "Every single person who believes in the Clinton health conspiracy is already for Trump ... Every second he or his surrogates spend talking about Clinton's health is a lost moment for his campaign."

As for Gingrich, that cough sounded serious. Maybe he should get that checked out.