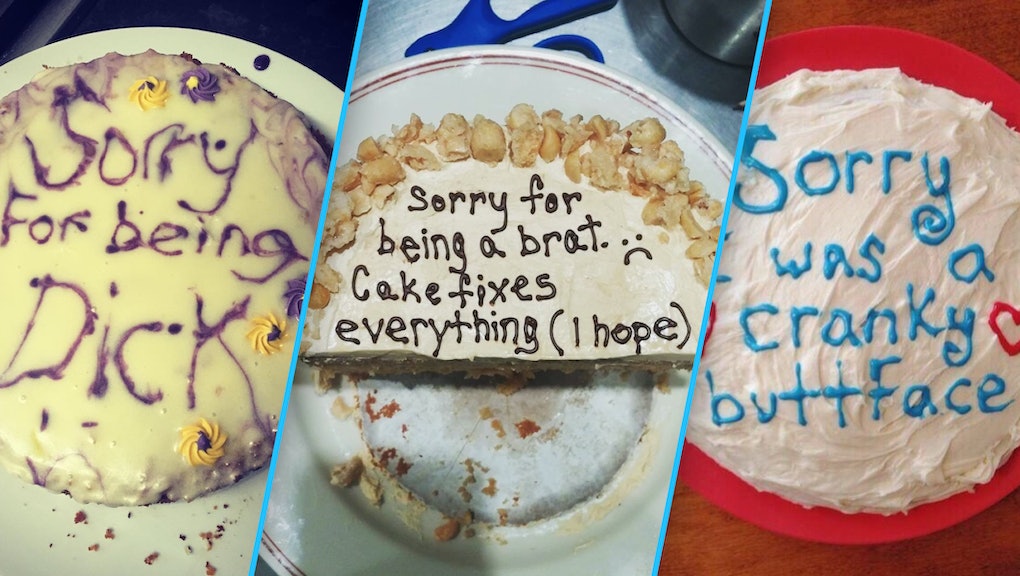 How to give someone an apology cake

"Is it too late now to say sorry?" has been a popular refrain in 2016. (Thanks, Bieber.) But perhaps we should be asking "Is it too late to bake an apology cake?" instead.

Using cakes to celebrate events (graduations, weddings, anniversaries) is a time-honored tradition dating back to the Romans, the Huffington Post reported, noting that 50th birthdays were cause for a special cake.

It's not clear which individual cooked up the idea for apology cakes, but Google searches for the phrase skyrocketed after apology cakes became a meme in 2003, Know Your Meme noted. But this trend isn't confined to internet chat rooms — lots of people are using cakes IRL to seek forgiveness for offenses that range from the trivial (being cranky, vomiting on someone, watching Game of Thrones without someone else) to the more serious (almost getting someone arrested).

Take a gander at some other apology cake gems:

Needing to apologize for something is daunting. Cake is the opposite of daunting — it's delicious! A sugary surprise won't negate the effects of your wrong-doing. Can it provide a lighthearted opening for a sincere apology?

Jenny Hudak, a high school student in Miami, gave her teacher an apology cake to repent for being late to class during the school year, Buzzfeed reported in May. Smiling reaction? Success.

Back in 2012, Rachel Gelmis' mother baked a cake to apologize to her daughter for thinking she took drugs, New York Magazine reported. In this case, Gelmis requested a cake after her mom asked how she could make it up to her. "You are forgiven. The end," Gelmis wrote in a Facebook post. Smells like a successful apology to us.

But cake can't get a wrong-doer off the hook for everything. While the case has since been proven a hoax, a police officer allegedly texted a photo of a "Sorry I tased you" cake to a woman, the Pensacola News Journal reported. This example stands as the type of apology that does not work drizzled atop a plane of frosting. Yes, the idea of apologizing for tasing someone with food is more than a little unsavory.

Wondering how to pull off the ultimate apology cake? Here's how it's done.

How to give an apology cake

If you did the crime, should you do the time — in the kitchen, perhaps? Either a homemade or store-bought cake can sometimes do the trick. (Though, you'd probably get bonus points if you fire up your oven and DIY, and research shows baking can help relieve stress, which might help soothe nerves before your "I'm sorry" moment.)

But in the end, it's really not about the cake, or any other "apology gift" like flowers. The most important part is the sincerity of your apology.

"1. You actually have to use the words I'm sorry.

All that probably won't fit on a humble sheet cake. But starting with "I'm sorry" and taking responsibility for your screw-up can set you up for delivering a legitimate apology that can (fingers crossed) repair any damage done to your relationship.