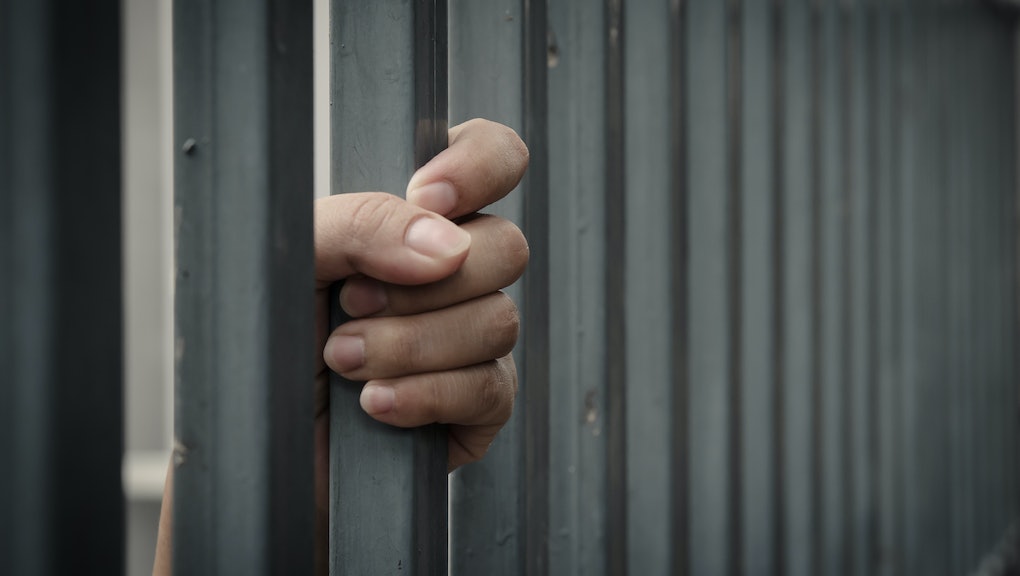 In Oregon, a sexual assault victim is sitting in prison, waiting to testify in the trial of a man she accused of habitually coercing her into sex.

If that sounds in all ways counter-intuitive, that's because it is — in what world does the victim land behind bars for a crime committed against her? And yet, it happens, thanks to a seldom-employed maneuver called a material witness hold or a material witness warrant, generally reserved for cases in which the prosecutor needs, but cannot count on, a very important witness to testify.

Material witness holds must be ordered by a judge, but rarely are — and it's rarer still that the witness is a sexual assault victim. Still, it happens, and it's damaging, both to the criminal justice system and the survivor.

"I think when you're looking at crime victims, it's a particularly horrible idea to try to use the material witness order," Sandra Park — senior staff attorney at the ACLU's Women's Rights Project — said in a phone interview.

"You're sending a message to crime victims that they will be criminalized for their own participation in the criminal justice process, and I think that overall undermines the system as well as dehumanizing the victims."

Each state handles witness detention differently in the rare instance a judge approves it — and Oregon's precedent is particularly uninspiring. As the Oregonian reported in March, 2015, Benito Vasquez-Hernandez, an immigrant who could neither read nor write and who had committed no crime, was held in the Washington County Jail for upwards of 900 days while he waited to testify in a murder case.

There's little to no data on how many people are held as material witnesses, and less information on how many of those individuals are sexual assault victims. But a few cases stand out in recent memory: In one particularly startling incident, a female rape victim in Texas was locked up in Harris County Jail for a month in 2015 where she allegedly suffered further abuse by a guard and an inmate. A mixup led to her being identified as the assault perpetrator, rather than the victim, in the jail's computer system.

In 2012, a Sacramento, California, a judge jailed a rape victim who twice skipped court dates in her attacker's trial. In 2016, a Maine woman was thrown in Kennebec County Jail to ensure she'd testify against a man who had assaulted her for two days with the apparent intention of killing her. In that case, the victim's lawyer called the decision to detain her client "an abuse of power," one that "further traumatizes victims who shouldn't be traumatized."

The same argument was made Wednesday at a hearing to decide whether the 41-year-old sexual assault victim in Oregon would remain behind bars. According to the Oregonian, the prosecutor said he had no other choice — the woman was a flight risk who had previously failed to respond to a subpoena. The judge, Charles Bailey, agreed — the woman, whose name has been withheld, will stay in prison. Her case is further complicated, however, by the fact that prison is the place where the crime occurred in the first place.

In 2012, the Oregonian reported, the victim was an inmate at the Coffee Creek Correctional Facility, a women's prison in Wilsonville, Oregon, with a history of hiring sexually abusive guards. She alleged that her former corrections officer, Brian Balzer, 42, engaged her in a sexual relationship and that the pair remained in touch after her 2014 release.

By law, an inmate cannot consent to sex or any kind of sexual relationship with a guard — it's seen as an inherent abuse of power, in much the same way an adult pursuing a child is.

"He manipulated and took advantage of me and I felt obligated. Degraded," she told the judge, according to the Oregonian. "I want to see him be held accountable for what he did to me and some other people. That's what I want."

Balzer left Coffee Creek in 2013, was arrested in early December and charged with one count of first-degree custodial sexual misconduct and one count of supplying contraband to a prisoner. He posted bail the same day and hasn't returned to jail since.

The woman who accused him, meanwhile, was re-incarcerated on Aug. 16 and will stay in prison until Balzer's trial begins on Oct. 4. According to the Oregonian, the woman's history seemed to influence the judge's decision to keep her locked up.

Her criminal record shows bouts of drug use, identity theft and burglary, and after Balzer walked out of jail in December, the woman started using again. She then went off the grid, the parole violations resulting in an eventual warrant for her arrest. She did not appear when subpoenaed, she said, because she was trying to steer clear of friends and family who would pull her back into drug use, not avoiding the police.

Witness testimony in an assault case is always important, Park said, even if consent was never on the table here. The question is how the prosecution secures that testimony.

"What was disturbing in this story was [that] the survivor apparently has repeatedly said that she wants to testify," she explained. The prosecution, she said, looks like it's punishing a victim for cooperating. And that sets a dangerous precedent, one the woman's lawyer highlighted at Wednesday's hearing, according to the Oregonian.

"She was in chains," attorney Betsy Rawls said. "Belly chains and shackles. And she's the victim." Other victims — and the woman who accused Balzer reportedly believes there were others — might not want to come forward if they believe that doing so will land them back in prison, Park said. Shanlon Wu, a former federal sex crimes prosecutor and current partner at Wu, Grohovsky & Whipple, agreed.

"I think there's a big disincentive that you're creating there," Wu said in a phone interview. "Whenever you do something which essentially punishes a sexual assault victim, it adds terribly to the burden of making victims feel that it's safe and a good thing to come forward."

"Sexual assault victims already feel that it's a very grueling system to have to go through," he said.

And when the victims involved are inmates, Wu continued, it gets even thornier: There is the possibility that guards might retaliate against her, and against any other inmates who may have been involved.

"In making a victim comfortable coming forward, one of the things to point out to them is, You're not alone in this," Wu said. "There are other people that were victimized; they're coming forward, too, and also your coming forward may give them the courage to come forward."

Keeping this victim detained in prison, he said, accomplishes the opposite goal. And because prison was the setting of the original assault, being there could trigger flashbacks and PTSD.

There are many other ways prosecutors can corral a difficult witness. And as both Park and Wu agreed, the emphasis in dealing with a victim witness should always be on support. Park suggested a pre-trial deposition of the victim, which — according to the Oregonian — the woman's lawyer will be requesting.

Wu mentioned that, in a case where drug abuse is a concern, working with social services to accommodate the victim in a residential treatment facility. He also named electronic monitoring as a less-invasive option — one the judge dismissed, according to the Oregonian, because of the victim's history with drugs. It's worth noting, though, that electronic home monitoring is a sentence not infrequently dealt to alcohol and drug offenders.

While material witness detention might present itself as a reasonable option in the extremely rare case that a witness would be safer behind bars than on the street, Wu said, there are ways in which the state can protect them leading up to the trial. Both he and Park speculated that the victim's criminal record and socioeconomic background might predispose prosecutors to putting her back in prison. And when it comes to sexual assault victims, it's always possible the decision to detain them comes down to the prosecutor's personal bias.

"It really turns on whether the prosecutor is exercising their judgment wisely," Park said. "Unfortunately, the same kind of victim-blaming we see throughout our society, some prosecutors will also share."

She continued: "If they feel that the victim is somehow obstructing their goals, rather than taking an approach of working with the victim, using a material witness is an unfortunately punitive approach that undermines what we all want to see happen."

Which is, to see the criminal punished and the victim get justice.