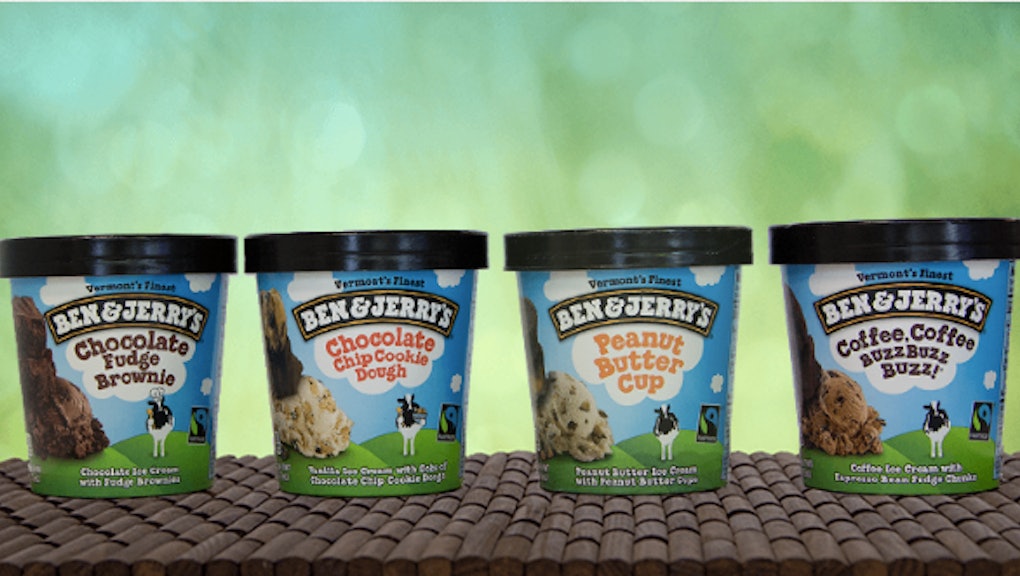 Your favorite ice cream flavors could go extinct in your lifetime

There are many downsides associated with climate change, but for some, the death of some of the most delicious Ben & Jerry's flavors may feel closest to home.

Yes, in a few decades, according to the popular (and often political) ice cream company's blog, climate change may lead to the demise of Half Baked, Chubby Hubby, Phish Food and many more.

While some still deny that climate change is an issue, most people realize it's more serious than ever. The rise in temperatures are predicted to lead to a number of crop shortages, many of which are critical for many Ben & Jerry's flavors, the company noted.

"We rely on farmers all over the world for our ingredients," the company wrote, "and when they don't have the predictable weather patterns needed for farming, that can mean no cocoa, no peanuts, and no Peanut Butter Cup ice cream."

One of the biggest crop shortages the world could face is that of cocoa, which is a key ingredient in ice cream and in many people's lives. Scientists predict that the production of cocoa could decline by as much as 50 percent by 2020, Scientific American noted. And since cocoa needs very specific conditions to thrive, it's not easy to grow the crop anywhere in the world.

This could be devastating for ice cream lovers, as fifteen different Ben & Jerry's flavors have a chocolate component.

Coffee crops also face major risks due to climate change. By 2050, half the land used for coffee production will be unable to produce good coffee beans, a new report from Australia's Climate Institute warns. By 2080, the report says that hot temperatures could render the wild coffee plant — a primary genetic component for the farming of coffee — extinct. Can you imagine a world, or even a day, without coffee?

The reality only gets worse: Pistachio ice cream, peanut butter and crunchy additions to dessert may become scarce, since climate change affects the nut supply. According to a 2011 study published in PLoS, it could become very expensive or impossible to grow nut trees thanks to the rise in winter temperatures.

Essentially, if you like ice cream, you may want to consider doing something to fight climate change — because if these predictions become reality, we will all be screaming for ice cream.