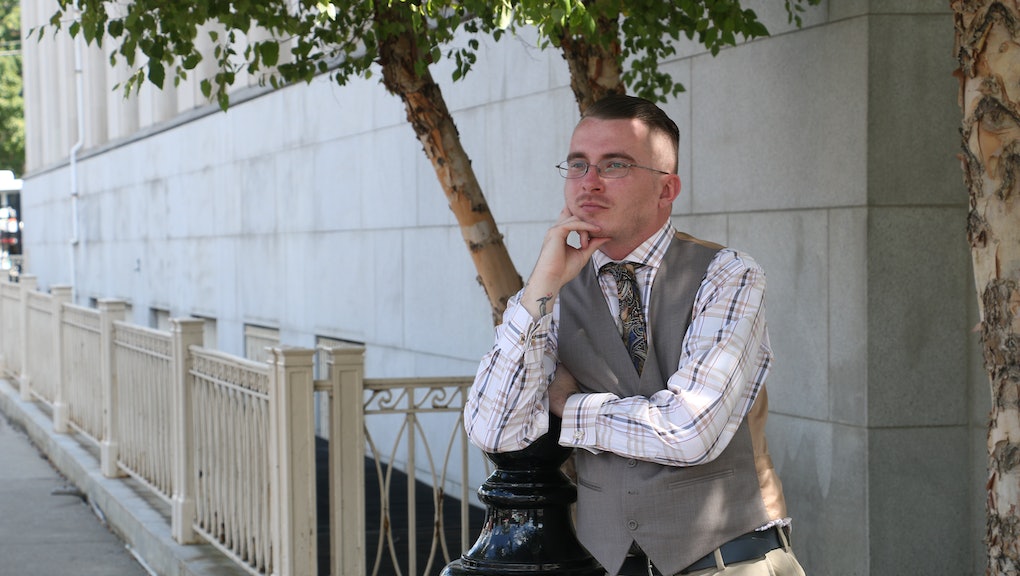 Lexington, Ky. — Deric Lostutter — the Anonymous-affiliated hacker who helped expose the violent rape of an underage girl in Steubenville, Ohio — pled not guilty Wednesday to four felony counts of hacking. He now faces a federal trial and up to 16 years in prison; the rapists he exposed now walk free. Lostutter's one week trial will begin on November 8th.

"They want to make an example out of me for exposing a coverup."

Three years after Lostutter helped expose the scandal in Steubenville — in which a group of high school football players recorded themselves sexually assaulting an unconscious girl — the U.S. Attorney's office for the Eastern District of Kentucky is going after him for his part in the hacking that exposed the rapists. The Reagan-era law being used to prosecute Lostutter is the same one that was used to go after celebrated internet activist Aaron Swartz in 2012, who committed suicide while under indictment.

Lostutter and his defense say that the only reason prosecutors are coming after him is to make a martyr out of someone who used free speech and the media to expose rape culture and institutional injustice while furthering the careers of a few federal attorneys.

"They want to make an example out of me," Lostutter said in an interview Tuesday. "For exposing a coverup."

As a leading member of hacking group KnightSec, in the past Lostutter has attacked revenge-porn magnate Hunter Moore and the Westboro Baptist Church hate group. When Lostutter read media accounts of a possible sexual assault at the school, he jumped at the opportunity to shed light on the growing news out of Steubenville.

It was the eventual hack on local football fan site RollRedRoll.com that landed Lostutter in court. In order to expose the coverup by school administrators, Lostutter allegedly approached fellow hacker Noah McHugh, who went by the username JustBatCat, to get into the site and dig around in the emails of site administrators. Once inside, McHugh — and allegedly Lostutter — found emails and photos regarding the Steubenville "rape crew" that allowed them to piece together, investigate and publicize the rapists' identities and actions, as well as the administrative coverup that protected them.

McHugh pled guilty in Lexington last week and admitted to hacking the site in question.

The law the federal government is using is famous in the tech world as one of the most draconian, outdated laws governing the way we use computers: the Computer Fraud and Abuse Act.

The CFAA is a Reagan-era law that criminalizes unauthorized access to "protected computers," which was established back when a home computer was a novel appliance for accountants and hobbyists. The CFAA is meant to give prosecutors a way to fight computer crime in an age where the traditional ideas of theft and snooping are muddied by hacking and the internet. But it's also been a giant hammer used to bludgeon defendants in even the smallest cases.

Since the advent of smartphones and the internet, the CFAA has been interpreted so broadly that sharing your Netflix password with one too many exes could put you in violation. In 2012, open-internet activist, Reddit cofounder and prodigy Aaron Swartz was hit with the CFAA simply for downloading academic papers illegally. Fearing decades behind bars, he took his own life at the age of 26.

"There's a mindset that you can solve these intractable problems by punishing your way out of them," Tor Ekeland, Lostutter's attorney, said in an interview. "It's the same mindset that led to the failed war on drugs and filled our prisons full of people who don't belong there. It's a perverse, puritanical mindset that's been in our country for a long time, that thinks we can solve our problems with punishment."

The federal prosecutors and district attorney's office affiliated with Lostutter's case did not immediately respond to Mic's request for comment.

Ekeland is one of the CFAA's most vigilant opponents. Over the past four years, he's defended some of the CFAA's most famous targets; Ekeland's first federal case was defending notorious troll and white supremacist Andrew "weev" Auernheimer for a hack against AT&T in 2012.

Yet Ekeland can't make sense of the disparity between Lostutter's actions and his being hit with the full force of a federal prosecution, especially given the comparatively lax repercussions faced by the perpetrators Lostutter helped to expose. One of the students involved in the Steubenville rape was given a minimum sentence of one year while the other was given a minimum sentence of two years. Both have since been released.

The criminal justice system in the U.S. regularly fails to treat rape prosecutions, and victims, with the severity and seriousness they deserve. Less than a week before Lostutter's arraignment, Brock Turner was given early release after serving three months in jail. Turner was a Stanford athlete who was sentenced to only six months for sexually assaulting an unconscious woman behind a dumpster. And in February, a student from Indiana in spent just one single day in prison after pleading guilty to violent rape.

None of the notoriety and fame from his involvement in exposing the Steubenville rape coverup is lining Lostutter's pockets to cover his legal costs. Lostutter, whose wife currently has a baby on the way, is seeking donations just to stay afloat. Ekelend is taking on his case pro bono.

The day before the arraignment, Lostutter showed Mic a small, folded receipt from a pawn shop — he'd sold his PlayStation just so he could afford to eat while visiting Lexington to plead not guilty.

Even as Lostutter sells his possessions to keep his phone and power from being shut off, former friends and loved ones have turned on him. Many members of Anonymous, who still refer to him as "KY" in reference to his handle "KYAnonymous," have disavowed him for the cardinal hacktivist sin of fame seeking. After Lostutter started making the press, a longtime ex-girlfriend publicly accused him publicly of sexually assaulting her, though she did not file charges. Lostutter vehemently denies the claims, saying she was embittered by the attention he received.

Even fellow Steubenville internet vigilantes have turned on him. Alexandria Goddard, the local blogger who drew early attention to the Steubenville incident by digging through social media, has been tweeting celebratory jeers at Deric since he arrived in Lexington for his arraignment.

Goddard now blogs regularly about Lostutter, mixing personal anecdotes about Lostutter's sex life and marriage with veiled accusations that Lostutter exploited his wife's stillborn baby in order to raise funds. Goddard's issue: that Deric is shaping up to look like a hero.

Ekeland figures that all of the media attention is what is driving the prosecution in the first place. In the eyes of the Department of Justice, hackers like the moral scolds who hacked marital affair-based dating site Ashley Madison, or the hackers who exposed wrongdoing within the Democratic National Committee, are populist vigilantes that must be deterred. For a federal prosecutor, a successful conviction against a hacker affiliated with Anonymous using the CFAA is a career milestone.

"All they're thinking about is their careers," Ekeland said. "And they just re-involved [the rape victim] by bringing this case. Our tax dollars are going to pay for this? What does this accomplish? It accomplishes nothing."

For three years, Deric's case has played out in the press, tweets, angry text messages and vindictive blog posts. And now they'll face an unpredictable trial against prosecutors who can't allow Lostutter to be remembered as some kind of hero.

"They want a show trial," Ekeland said. "And they've got one."