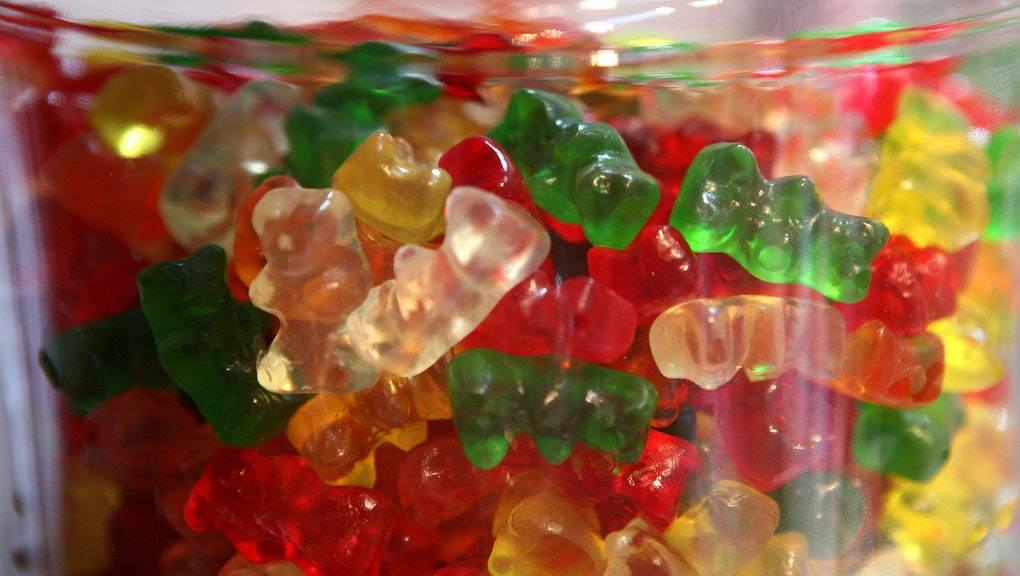 Here's the gross truth about how gummy candies are made

Today in things that will leave you quivering in fear: A video showing the disturbing way gummy candies are made from pig flesh.

Yup, products that contain gelatin come from animals. If you're thinking of going vegan, say goodbye to gummy bears and Starbursts.

Gelatin, the star ingredient in Jell-O and other wobbling desserts, is made from pigskin, cattle bones and cattle hide, Kantha Shelke, a food scientist and Institute of Food Technologists expert, said in an email. It's created by breaking down the collagen in bones and skin "that are generated as waste during animal slaughtering and processing," Shelke said.

The video should be taken with a grain of salt. "[It] is a collage of certain parts of gelatin manufacture combined with pig processing," she said. Pigs and other animals aren't slaughtered just for gelatin production. "It would be a terrible waste of other parts of the animal," she said.

But there's some good news — some gummy sweets, like Swedish Fish and Sour Patch Kids, happen to be vegan, according to PETA.

Still, this video isn't for the faint of heart.

(Editor's note: The GIFs and video below contain disturbing footage. View with discretion.)

In a video titled "Gelatine," Flemish public broadcasting company VTR reveals how gelatin is made, but in reverse. It starts out fairly innocent enough, with candies rolling around a factory, getting dusted with sugar.

Then you see the liquid gelatin as it gets colored. NBD so far.

But things start to get alarming when you see pig flesh rolling down a conveyor belt.

And then a scary machine shaves off skin from the animal's dead body.

Next up, the dead animals get trussed up, in reverse.

And the pigs get licked by malicious-looking flames.

Finally, the parting shot. Viewers are left with a shot of a pig raising its pink head to blink slowly at the camera.

Your Jell-O was alive in a past life

Bottom line: That shimmying Jell-O was a real animal at one point in time. Maybe even a cute pig that looks like Babe. If that makes you squeamish, you might want to stick to chocolate and lay off the gummies this Halloween.

"The food, pharma, and dietary supplement sectors have looked into gelatin alternatives or substitutes," Shelke said, noting that there's incentive to create a gelatin replacement because of lucrative vegetarian, halal and kosher markets. But to date, no substitutes can replicate the functionality of gelatin, she said. Translation: Pectin and starches won't cut it in gelatin puddings and other desserts because the texture will be either too sticky or too gummy, Shelke said.

Jell-O did not immediately respond to Mic's request for comment. Below is the video in full.

This article was originally published on Sep. 15, 2016