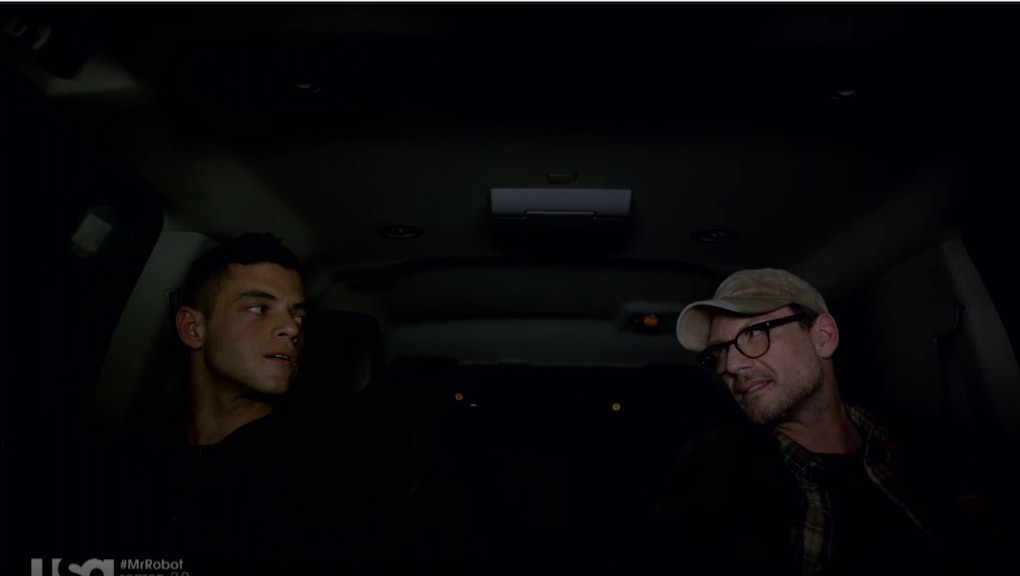 ‘Mr. Robot’ has put all the pieces in place for its sprawling, 2-hour finale

In spite of a second season that's featured several episodes substantially longer than typical one-hour TV dramas — a choice criticized by some — Mr. Robot's most compelling episode this year clocks in as its shortest and most conventional.

(Editor's note: Spoilers ahead for the second season of Mr. Robot.)

Season two's 10th episode fit just a one-hour time-slot (with commercials), but what it lacked in length it compensated for with mounting suspense. The episode ends with another shoot-out between Dark Army minions and FBI agent Dom; Angela confirms that Elliot created fsociety; and Elliot and Angela share a brief kiss, the culmination of a story that the show was building up since the start of the series.

Mr. Robot, more importantly, put all the pieces in place for its finale. But even with a two-episode finale spanning a fortnight, there's still a lot of questions the show has to address.

Are Cisco and Darlene alive? We see Dom make it out of the shoot-out with another Dark Army lackey alive, but the real target of the attack was Cisco, whose identity was given to the media by the FBI. Naturally, then, we have to wonder: Who else made it out of the diner alive?

There would be reason to suspect Darlene could've been killed; actress Carly Chaikin delivered her best monologue on the show to date, detailing the time she was kidnapped as a girl and never wanted to be found. It feels, suspiciously, like the TV drama trope of a character sharing some important backstory before tragically being killed.

Conversely, Mr. Robot rarely follows the conventions of other dramas, and Darlene's trials and tribulations as fsociety's incumbent leader were some of the season's best moments. So she may be safe.

The most likely victim is still Cisco, who's narrowly avoided danger in the past — he was hit in the head with a baseball bat by Darlene and had a needle stuck through his finger by the Dark Army, for goodness' sake. Plus, while we're never going to mistake Darlene and Cisco as the perfect TV couple, they shared a rare, tender moment in the diner before the shootout when he playfully took some of her food. For the sake of the suspense, at least one character should have died in the shootout, and our money's on Cisco.

They've been MIA since, but they certainly shouldn't be presumed dead until we have on-screen evidence. But if the FBI doesn't have them — and they're still gone — where could they be?

It could relate to Angela's mysterious encounter in the subway with a group of strangers. While some fans suspected that Angela was trying to frame Elliot with an fsociety confession — and the show could've left it open-ended until next week — the episode 11 preview plainly hints that Angela was kidnapped. Given that she was taken in a public space, and Mobley was last seen entering the subway as well, they could be theoretically related.

What's going on with Tyrell Wellick? Elliot's still trying to find out the truth about Tyrell Wellick. Mr. Robot insists that they killed him, but the audience should be skeptical. If anything, Tyrell actually being dead after a season-long tease would be a massive middle finger from creator Sam Esmail.

However, just because we can presume Tyrell is still going to fit into the narrative doesn't mean we're close to a definitive answer. But at least we're finally making progress when Elliot tracks the location of the cryptic phone calls: an auspicious address on the Upper East Side.

Interestingly, the real-life address (92 East 82nd St.) pulls up a Smart PC Repair shop, and the Wellick's bodyguard/hitman had a jarring reaction to the phone's location that adds intrigue. He doesn't believe the calls would be coming from Tyrell.

"Trust me," he tells Elliot. "He wouldn't be calling from that house."

What was in Elliot's apartment that Mr. Robot was looking for? Mr. Robot has already teased fans with a sitcom-style opening, so perhaps it's unsurprising that its latest episode took a page from Dora the Explorer's book.

When Elliot gets to his apartment, he posits that something important is hidden there that Mr. Robot wants to find, considering he was begging Elliot to go back once they were released from jail. But Elliot was preoccupied with finding Tyrell's location, so he asks the audience — his imaginary friend — for some help as the camera pans around the room.

Really, it's a very meta invitation from Esmail to the Reddit community: Find what Mr. Robot is looking for, if you can. For the next week, you can expect some revelations online — some of which could be right. After all, Reddit was correct about the prison theory very early. The hunting should keep fans occupied as they wait for the two-part finale.