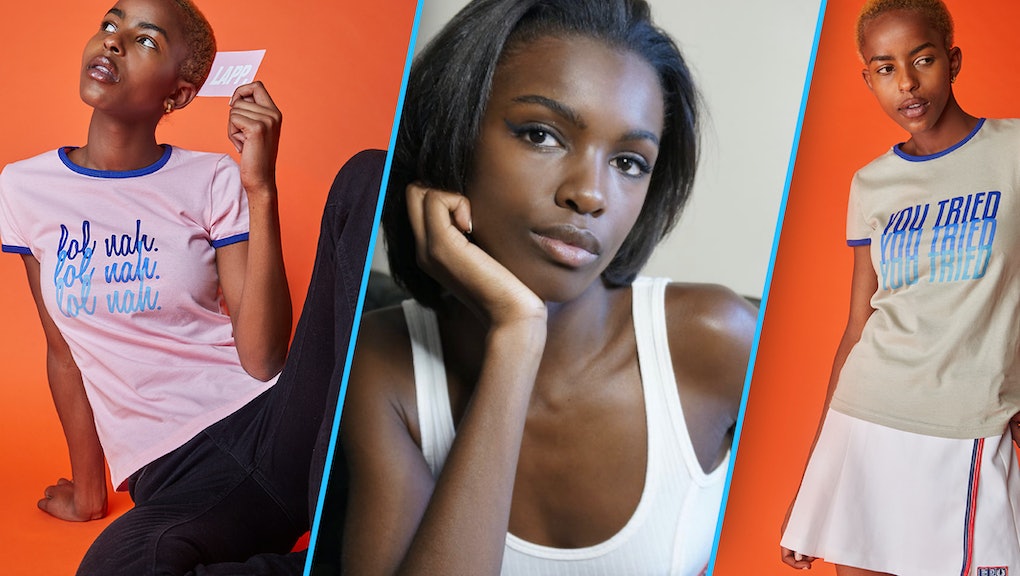 In just the past few months, she's spoken out about the fashion industry's many problems with dark-skinned women, what it's like to sit in a makeup chair as a woman of color and even the importance of young women being in control of their sexuality, and their choices.

Now, Anderson is taking her passion for female empowerment and mixing it with her other passion: fashion.

Anderson, 23, has created a small clothing line that's meant to spark a conversation about sexual consent, and the importance of saying "no."

In an interview with BuzzFeed, Anderson revealed that the idea struck her after she posted an open letter on her blog in April titled "An Open Letter About Consent and Saying No."

"Saying no doesn't make you scared or frigid, it makes you smart and mature — you never want someone to be able to hold something against you or expose you," she wrote at the time.

After receiving an overwhelmingly positive response, she decided to create T-shirts emblazoned with sayings that are akin to the word "No."

The shirts are currently on sale on Anderson's new website LAPP (which stands for Leomie Anderson the Project the Purpose), for £22 (or about $29) a pop.

"The phrases on the tees are different ways you can say no to a situation you don't feel comfortable with, be it sex, sending nudes, or just generally taking crap just because you're a woman," Anderson told BuzzFeed. "I wanted to show young girls especially that it is cool to say no."

Before Anderson's project, the only other time Victoria's Secret and the idea of promoting consent even slightly commingled was back in 2012 — and it ended up being a hoax. For a few days, people thought Victoria's Secret was behind the website PinkLovesConsent.com, which showed VS-like panties printed with words like "Respect" and "No means no." According to the Huffington Post, 50,000 people visited the site in just one day. However, that ended up being a hoax.

Now with these T-shirts, VS model Anderson is giving those 50,000 people the consent-inspired apparel they were looking for.

In addition to these T-shirts, Anderson said the entire purpose of LAPP is to offer women a safe platform to speak out and share their experiences as women.

And over on LAPP's blog that looks to be well under way, with Anderson already publishing essays from women about eating disorders, social media, body image and relationships.

"My message for all women is to never dull your shine and never lessen yourself to gain acceptance," Anderson told BuzzFeed. "Be proud of who you are. To black girls and women I say, 'Don't let anyone police your identity because of the color of your skin.'"

With Anderson's star only rising, we're hoping more women than ever before will hear that message loud and clear.