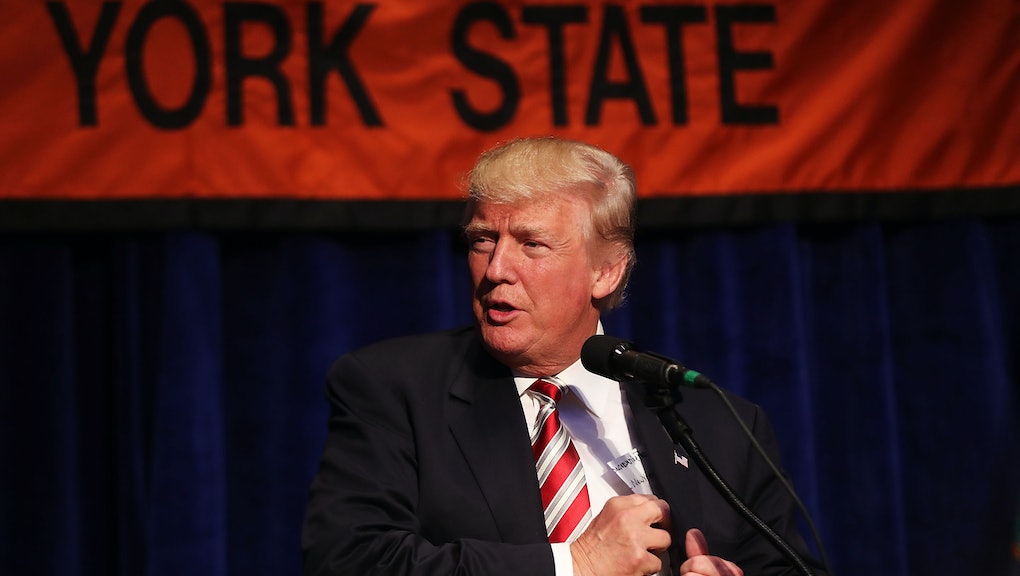 Donald Trump wants you to think he tells it like it is. His Iraq War lies show he doesn’t.

Donald Trump on Thursday engaged in an astounding feat of verbal gymnastics, attempting to clarify his stance on the Iraq War a night after being nearly universally panned for lying about where he stood before the invasion at a nationally televised forum on foreign policy.

"I opposed going in, and I did oppose it, despite the media saying no, yes, no, I opposed going in," Trump said in a nearly 10-minute-long rant before a speech in Cleveland that was meant to be a reveal of his education policy.

Trump went on to read past quotes he had made on various news programs about the war, including to Fox News host Neil Cavuto in early 2003.

"It's sort like either do it or don't do it," Trump told Cavuto of the invasion in January 2003, according to factcheck.org. "When I watch Dan Rather explaining how we are going to be attacking, where we're going to attack, what routes we're taking, what kind of planes we're using, how to stop them, how to stop us, it is a little bit disconcerting. I've never seen this, where newscasters are telling you how — telling the enemy how we're going about it, we have just found out this and that. It is ridiculous."

Trump also cited an interview he gave to Esquire in 2004 in which he called the war a "mess."

However at that point, the war was already raging.

Esquire, clearly frustrated by Trump's usage of the piece as a defense of his stance on the war, put an editor's note on the piece describing the timeline, noting that his remarks were not proof he had been "against the Iraq War from the beginning."

Similarly, in his long-winded explanation of his early thinking on the Iraq War, Trump also omitted his interview with Howard Stern before the Iraq invasion, which he told Stern he supported.

"Are you for invading Iraq?" Howard Stern asked Trump in 2002, according to audio dredged up by BuzzFeed.

"Yeah, I guess so," Trump answered.

Trump's attempt to convince voters he opposed the war from the beginning, when there is plenty of proof that he actually supported it, could hurt him among voters who like his "tell-it-like-it-is" style.

That style helped propel Trump through the primaries, including in states like South Carolina, where exit polling showed 78% of Trump voters said his "tell-it-like-it-is" style was his most important quality.

Similarly, an ABC News/Washington Post poll from early August found 42% of voters gave Trump high marks for "[telling] it like it is regardless of whether or not it's politically correct."

However Trump's obfuscation of his Iraq War support could cut into that trait, potentially hurting his level of support.