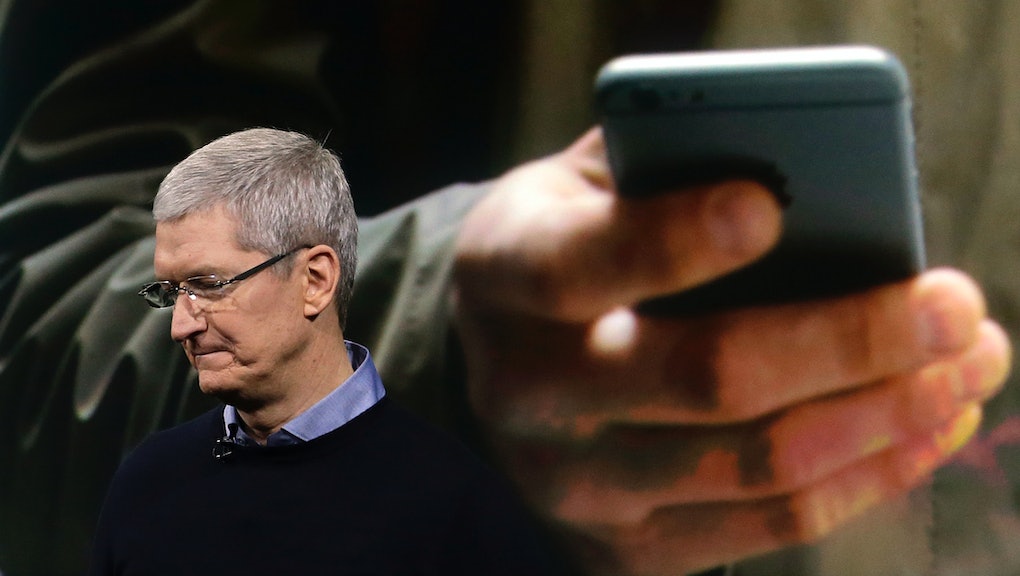 Apple is committed to diversity, but it fails on the biggest stage in tech

If Apple is serious about diversity, it's not evident in one of the company's biggest events of the year.

In August 2015, Apple CEO Tim Cook acknowledged that "there is a lot more work to be done" when it comes to the company's diversity. If so, this progress is demonstrably absent from Apple's keynote addresses.

There is something noticeably missing from its presentations: women.

In both 2015 and 2016, Apple's September keynote speakers were almost exclusively white men. While 19 women have graced the Apple stage since 1997, only nine were Apple representatives.

There is an additional divide: At the past two September keynotes, a woman has never introduced a new product. Without fail, they demonstrate devices or features men have already announced.

Three women appeared onstage at Apple's 2016 keynote. Susan Prescott, Apple's vice president of product management and marketing, demoed updates to Apple's iWork program — after Cook informed the audience that there would be updates. Hannah Catmur, lead designer for ViewRanger, demoed the hiking app — after Apple Chief Operating Officer Jeff Williams announced that the new Apple Watch would have built-in GPS. Heather Price, co-founder of ThisGameStudio, was invited to the stage by Phil Schiller to demo live gaming on Apple's new A10 Fusion chip — after Schiller announced the chip's performance capabilities.

"The first thing that came to mind when you brought this to my attention was a quote I heard Gloria Steinem say," Jamia Wilson, executive director of Women, Action & Media, said on the phone. "[Women's bodies] are treated as 'ornaments, not instruments.' Not instruments of change. Or power. Or leadership."

(Note: Apple did not return repeated requests for comment.)

We see this divide represented in male Apple executives' inadvertent sexism: Apple Music head Jimmy Iovine telling CBS This Morning that "women find it very difficult at times to find music," or a spokesman digitally "fixing" a woman's face by forcing her to smile at Apple's September 2015 event.

We see this divide in the upper echelons of Silicon Valley, where as of 2015 only 11% of executive positions were held by women. Gender inequality pervades the companies behind the products and services we use every day, from Twitter to Facebook to, yes, Apple — despite study after study showing the positive effects of equal representation in leadership.

"It isn't a shock, but it's still stunningly problematic that we are still dealing with this," Wilson said, noting that if the diversity issue were treated with the same urgency as a financial obstacle, Apple "would do whatever it took to fix this problem."

"This is about not alienating your customer base, doing what's right and [making] sure we're moving closer to parity — because it's 2016," she said. "There's no excuses as to why this isn't happening more rapidly and more urgently."

While as a whole, LinkedIn is closer to equal representation, its leadership numbers aren't there yet: Only 30% of women held a position of leadership, as of 2014.

Apple, too, is taking strides — but not where it matters most. It has made a commitment to diversity across the company, but in January, its mostly white board didn't see diversity as a priority for leadership positions, calling it "burdensome and not necessary."

When Jamia Wilson read this report, she noticed she was surrounded by Apple products. She thought about "how much money I've invested in an organization [that] doesn't believe in investing in people like me."

Simply put, Apple's gender divide, both within the company and onstage in San Francisco, does not represent the company's consumer base. And incremental progress still yields pathetic results — the numbers don't lie.

Women iPhone owners want more from Apple. "They have the resources and the positioning and the power to make radical change," Wilson said.