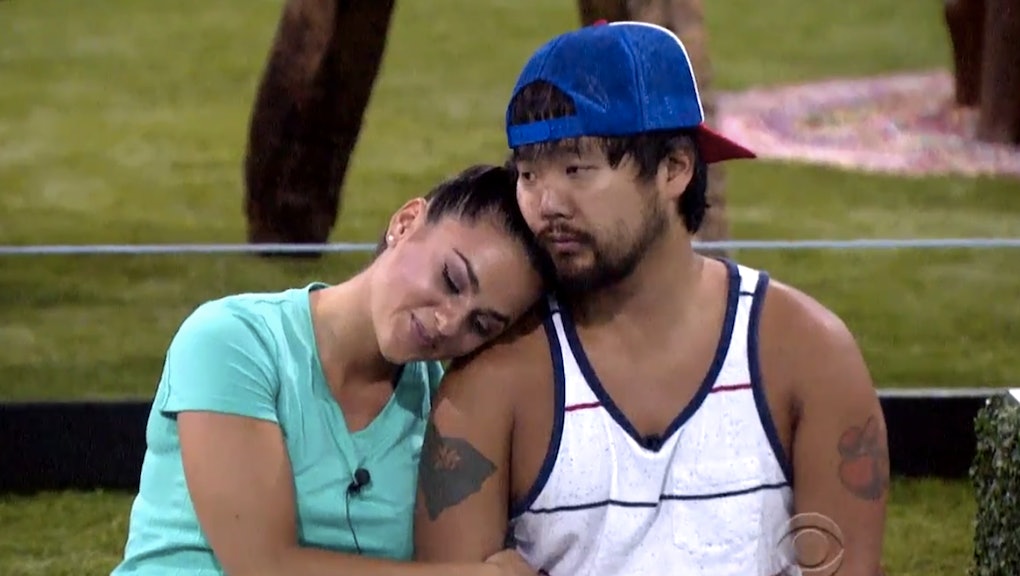 A Big Brother showmance is on the line.

Natalie and James are on the block this week, and Thursday is the last evening the two will share in the house together. Victor — this week's Head of Household — is in a final four alliance with Paul, Corey and Nicole.

Natalie recently threw James under the bus to Victor and Paul, telling them she regretted going against them earlier in the game and she was only following James' advice. Victor and Paul told James about Natalie's betrayal, and he was understandably upset.

The tension between Natalie and James is palpable. James confides in Corey, gaining his sympathy. At this point, Nicole, Victor, Paul and Corey aren't sure who to evict. Meanwhile, Natalie is convinced she's going home.

On their last night in the house together, James tells Natalie that he knows she threw him under the bus and accuses her of using him to get ahead. He says she had a showmance with Victor when she first arrived and that didn't work out, she flirted with Corey and that didn't stick, and she had a fling with Paulie before eventually settling on James.

Michelle arrives in the jury house to a shocked Da'Vonne, Zakiyah, Paulie and Bridgette. They were disappointed to see her evicted. Michelle reveals that Paul called her a "c*nt" and tells the jury members that Nicole is essentially running the house.

We also see that Zakiyah and Paulie are back together, which upset Twitter users.

Natalie is unanimously evicted from the house.

When Natalie meets host Julie Chen post-eviction, Chen asks her if she felt she had thrown James under the bus. Natalie denies it, even after Chen reads back the text of the conversation she had with Victor and Paul.

Chen asks Natalie how serious her showmance with James was, noting that she professed her love for him and calling him her soulmate. She talks about their relationship, describing herself as "girlie and peppy" and James as "country and Asian." It was an insensitive and uncomfortable moment.

After Natalie's eviction, the Head of Household competition begins. The contestants each have a big vat of melted butter that they need to transfer across a slippery, buttery track. They have to carry the butter using small scoop to fill up a big bowl on the other side of the track. They can choose to fill the big container first or they can fill a smaller bowl first — if they fill the small bowl they get access to a bigger scoop that they can use to fill the big container more quickly.

Find out who wins the Head of Household competition on the next episode of Big Brother, which airs at 8 p.m. Sunday on CBS.