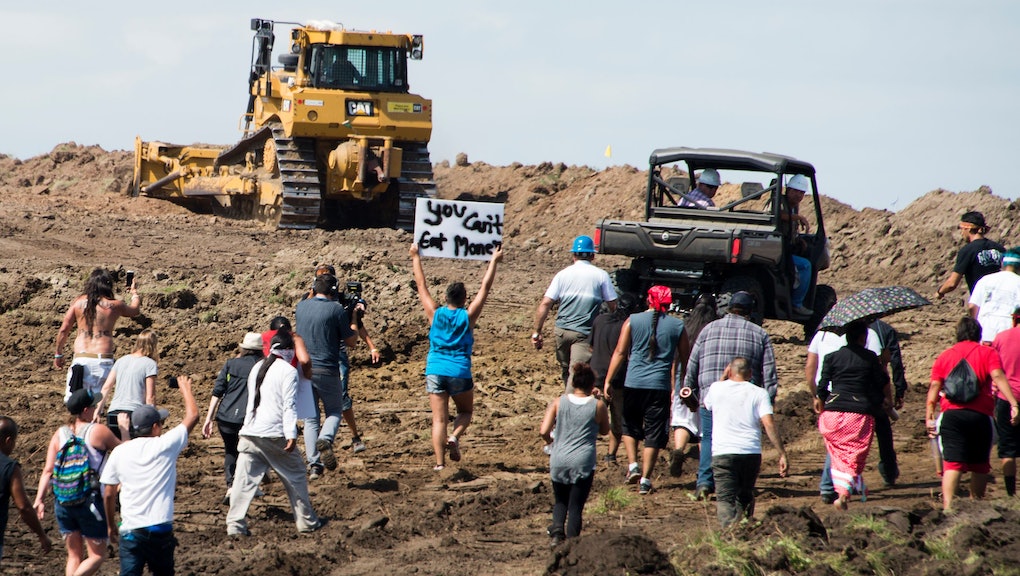 If you followed the news over Labor Day weekend, you probably caught Democracy Now's gut-wrenching video report on the protests going on near Cannon Ball, North Dakota.

A group of Native American demonstrators and their allies were trying to block construction on the Dakota Access oil pipeline there Saturday, only to be met with the kinds of violence we're used to seeing in footage from the Jim Crow era: guards armed with pepper spray canisters shoving and kicking dissidents, German Shepherd dogs raring at the ends of their leashes, gnawing on people's arms and faces.

Conflict like this is a rare sight for most Americans. The lives of indigenous people — especially those living in the rural heartland and American Southwest — tend to transpire far from the purview of big city media. But things have been different lately. Thousands of people, including Native Americans and First Nations from more than 90 tribes across the U.S. and Canada, have gathered to halt construction on the 1,172-mile proposed pipeline over the last few weeks — and the national media has started to take notice.

The Dakota Access project poses an imminent threat to the Standing Rock Sioux. If completed, it would burrow right under the Missouri River a mile from the Standing Rock reservation, which straddles the border between North and South Dakota. The tribe relies on the Missouri River for drinking water. And since oil pipelines leak with alarming regularity — there have been more than 2,000 pipeline accidents in the U.S. since 1995, with at least 121 in both 2013 and 2014 — contamination of the surrounding area is a very real danger.

But despite growing outrage and attention directed at the Dakota Access protests, this sort of conflict is common: The battles Native Americans have fought to protect their homes from settler colonists, interlopers and mining or oil companies over the last 500 years are no secret. But this past year has seen a number of heated fights over indigenous lands, safety and the sanctity of indigenous artifacts that haven't gotten nearly as much attention.

Here are three of the most prominent:

Gold King Mine spill in Colorado

In August 2015, the Environmental Protection Agency sent a cleaning crew to the abandoned Gold King Mine in Colorado's San Juan Mountains. The crew ended up fudging the job. They broke the plug that kept the mine's wastewater contained, sending 3 million gallons of "heavy metal" runoff into a creek that feeds the Animas and San Juan rivers.

Both rivers are major water sources for the Navajo Nation peoples in Utah, Colorado and New Mexico, who make up two-thirds of the people living alongside the San Juan. Navajo farmers use the river to water their crops and feed their livestock. Now, losses incurred from the spill — which poisoned the rivers with arsenic, lead and mercury, among other toxic chemicals, and turned them a muddy yellow — could exceed $335 million.

An estimated 1,500 farmers have been affected by the spill. It remains unclear how much money compensating them will cost, but the Navajo Nation and its supporters have been very vocal about the agency's perceived failure to do so satisfactorily. The Navajo Nation is now suing the EPA for damages.

"Our subsistence farmers and ranchers watched their crops die and relocated their livestock away from the River at great expense," Russell Begaye, president of the Navajo Nation, said at a hearing in April, according to BuzzFeed News. "Many have lost crucial sources of income and are still suffering."

On Wednesday, the EPA declared the Gold King spill zone a Superfund site, meaning it is contaminated enough to warrant a full-scale, multi-year cleanup. Officials say the cleanup may take decades, according to Colorado Public Radio. The Navajo Nation can do little but wait.

Occupation of the Malheur Wildlife Refuge in Oregon

On Jan. 2, more than two dozen local ranchers, property owners and sympathizers staged an armed takeover of the Malheur Wildlife Refuge in southeastern Oregon. Most of them were white. Their beef was with the federal government. The occupiers — led by Ammon Bundy — believed they had a constitutional right to the Malheur reserve and its surrounding territory, and refused to leave until authorities ceded the land.

They lost their battle 41 days later, when the last of their crew were arrested by law enforcement. That's the set-up. More important, however, is that the occupiers drew tons of negative attention from the local Northern Paiute Native Americans — the Burns Paiute — while they were staging their demonstration.

The Burns Paiute have a grim history with the area. They used to live on a reservation where the wildlife refuge is located, until they were driven off by angry local whites and forcibly removed in 1878. Their issue with the occupiers was simple, and quite logical: If the land "belonged" to anybody, it was them.

To make matters worse, the white occupiers flagrantly disrespected the Burns Paiute and its culture while they were on the site, taking videos of themselves rifling through Paiute artifacts and posting them online. They even dug trenches in the ground and pooped in them. The ground turned out to be filled with artifacts sacred to the Burns Paiute, including arrowheads and the remains of tribal ancestors.

"I feel disrespected that they're even out there," Jarvis Kennedy, a tribal council member for the Burns Paiute, told the Guardian after seeing the video of one occupier going through some artifacts being kept in a reserve ranger station. "It's like me going through their drawers at their house."

After weeks of vocal protests — and fecal revelations — the Burns Paiute expressed gratitude when the occupiers were finally kicked off the land.

"So thankful for all the Native nations — all the groups out there that supported us through this whole thing," Charlotte Roderique, a Burns Paiute tribal chairwoman, told the Indian Country Today Media Network.

In early June, a train carrying tens of thousands of gallons of highly-combustible Bakken crude oil derailed outside Mosier, Oregon. Parts of the train burst into flames, sending billows of black smoke into the air and leaking at least 42,000 gallons of oil, contaminating the Columbia River and its surrounding habitat.

The Yakama Native Americans, whose reservation lies in southern Washington, across the river from where the spill took place, immediately cried foul.

"One of our fishers has a fishing site just downriver from this oil fire," JoDe Goudy, chairman of the Yakama Nation, said in a statement, according to the Indian Country Today Media Network. "His livelihood and well-being, and the well-being of his family, could all be jeopardized by this single derailment."

The Yakama's concerns about the consequences of derailment are bolstered by studies, one of which was released by the Oregon attorney general's office just weeks before the June spill, according to the Columbian. In no uncertain terms, researchers have warned of the dangers of transporting oil through the region by rail. According to NBC News, citing data from the Pipeline and Hazardous Materials Safety Administration, 2013 and 2014 both set records for the amount of oil leaked while being transported by rail in the U.S. A record 1.4 million gallons were spilled in 2013 — more than in the previous 40 years combined. And in 2014, there were 141 separate spills, the most of any year in recorded history.

These oil companies' disregard for the warnings and, frankly, the well-being of indigenous people has proven a prescient precursor to what's happening in North Dakota today.

"We have repeatedly warned of train derailments, corresponding oil spills and the contamination that could result when these trains are carrying crude oil," Goudy said, according to the Los Angeles Times. "These trains and their tendency to derail are grave threats to the Yakama People."

In their own way, the Dakota Access pipeline protests are the logical outcome of these disputes. Not only do they all feature indigenous people standing up to industry, government and other such neglect and abuse, they challenge the very notion that financial dominion and claims to land entitle people — or so-called "owners" — to ravage and brutalize that land.

Meanwhile, the fate of the Dakota Access project remains hotly contested. A district court judge recently ordered Dakota Access — a subsidiary of Energy Access Partners, the Texas-based company that's building the pipeline — to halt construction in some parts until he made a more definitive ruling. According to the Associated Press, that ruling came Friday. The judge will allow continued construction on the pipeline.

But with the project gaining increased attention, the fight to stop it will doubtlessly continue, even despite the unfavorable ruling for the Standing Rock Sioux.

It's business as usual for the tribe, and for indigenous people across the U.S.