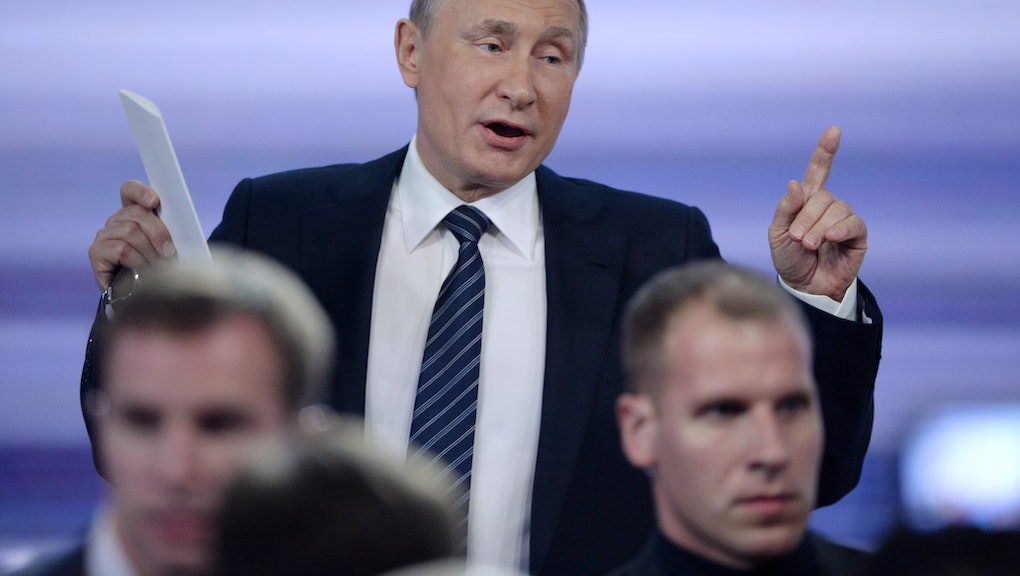 Donald Trump says Putin is a “strong” leader. Here’s what that leadership looks like.

Donald Trump and his vice presidential running mate Mike Pence doubled down on their praise for Russian President Vladimir Putin this week — with Trump calling Putin a "strong" and Pence saying it's "inarguable" that Putin is a better leader than President Barack Obama.

It's hard to understate how out of the political norm it is for a major party's presidential ticket to embrace a foreign strongman who is a hostile aggressor toward the United States.

It's especially shocking given the atrocities Putin has unleashed upon his own country.

To put the Trump-Pence ticket's embrace of Putin into perspective, here is a detailed look at what Putin's leadership in Russia actually looks like.

In Russia, a "gay propaganda" law passed in 2013 makes it illegal for members of the LGBTQ community to show public displays of affection or publicly express pro-LGBTQ sentiments.

Those who do are fined for the behavior.

And human rights groups say the law has led many LGBTQ community members and allies to suffer beatings and other extreme physical violence.

Despite his affinity for Putin, Trump has said he would be a great president for the LGBTQ community and has attacked Democratic nominee Hillary Clinton for her family foundation's acceptance of donations from anti-LGBTQ countries.

Russia falls near the bottom of Reporters Without Borders' annual Press Freedom Index, coming in just ahead of authoritarian ruled countries such as North Korea, Iran, Syria and Saudi Arabia for its treatment of journalists.

Russia controls the media as a propaganda arm, and attempts to silence — or even murder — journalists who defy the Kremlin's state-determined talking points.

It's likely why Putin has a high approval rating, as Trump pointed out Wednesday night, given that he controls the press and threatens those who do not

In 2014, two independent journalists "died in Russia under unclear circumstances" after reporting on Russia's illegal annexation of Ukraine, according to Freedom House, a watchdog group "dedicated to the expansion of freedom and democracy around the world."

Timur Kuashev, a reporter who was critical of Russia's policy in Ukraine and highlighted the country's human rights abuses, was found dead in August 2014 after a mysterious disappearance from his home.

Another freelance reporter, Valeriy Donskoy, died in Moscow after "being held in harsh conditions near the Russian-Ukrainian border," Freedom House said.

According to Human Rights Watch, another watchdog group that tracks human rights atrocities around the world, said that overall, "the Kremlin's crackdown on civil society, media, and the internet took a more sinister turn in 2015 as the government further intensified harassment and persecution of independent critics."

Opposition leader Boris Nemtsov's 2015 death raised new fears about the Kremlin's maneuverings, and it came on the heels of other deaths of key opposition figures.

In 2009, two Putin critics who defended those who suffered human rights atrocities under Putin were shot in the head and murdered.

In 2006, Alexander Litvinenko, an ex-Russian spy who escaped Russian persecution for London, was killed by Russian spies in London who had poisoned him with radioactive polonium.

In 2014, Putin ordered the Russian military to invade the Crimean peninsula, an action that led to an illegal annexation of a Ukrainian territory.

Taking another country's territory through military action is in violation of a number of long-standing treaties, including the Helsinki Accords, a Cold War-era treaty that established the respect of state sovereignty.

The annexation was widely condemned by world leaders. And the United States and Europe imposed sanctions on Russia for the military action.

Intelligence officials have said there is ample evidence to suggest Russia is behind the hacking of Democratic campaign groups such as the Democratic National Committee and the Democratic Congressional Campaign Committee.

Emails from those hacks have already been released via WikiLeaks to try and influence the outcome of the 2016 campaign.