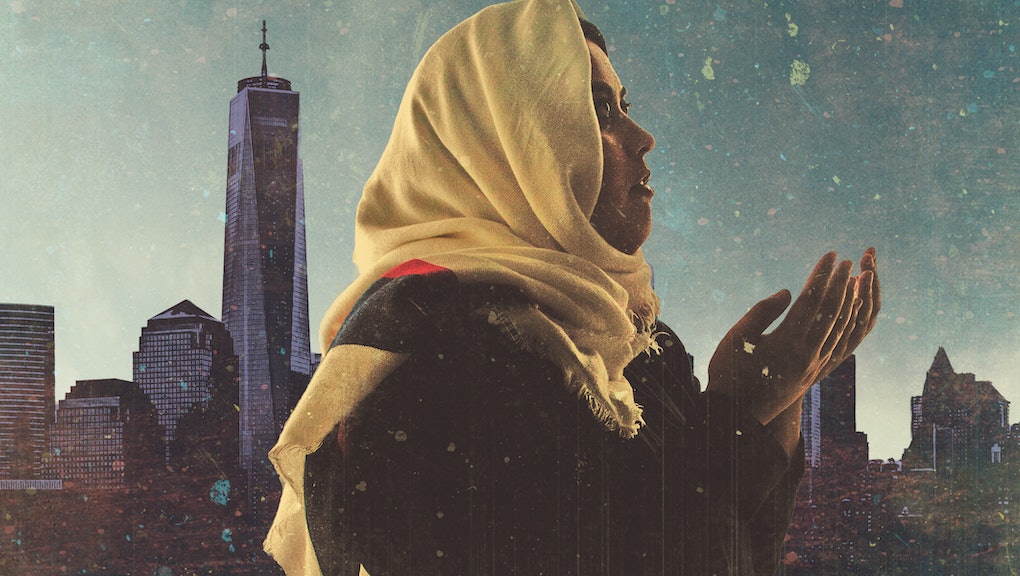 15 years after 9/11, this Muslim writer is fearlessly writing from the World Trade Center

To say, "9/11 changed my life" may seem like just another cliche. But at least for me, as a Muslim American who came of age after the terrorist attacks on Sept. 11, 2001, that day didn't just shape my identity — it changed it entirely.

Most Americans remember exactly what they were doing when they first heard news of the attacks. But for me, the memory that clings on like a recurring nightmare was when I first realized that the nineteen hijackers identified as Muslims. From that moment, I never viewed the world the same way. For Americans that had never been exposed to Islam, these attacks led to the idea that all Muslims were somehow guilty by association.

Since Sept. 11, I have struggled with my Muslim identity. I am half Japanese and half Moroccan Amazigh, which made it harder for me to find a community of my own.

I wasn't Asian enough; I wasn't Moroccan enough, and despite being born in this country, I wasn't American enough. And because I don't wear the hijab, I often wasn't seen as Muslim enough, so much so that it often protected me from racial and religious-based violence. However, my parents were still concerned for my future. They didn't want their first-born daughter to experience xenophobic violence. They also wanted to ensure that I would have the same equal opportunities as everyone else.

So one year after the attacks, my family legally changed our last name. My parents told me to never speak of Islam, defend Islam or publicly identify as Muslim because they wanted me to feel safe. As a result, I hid my Muslim identity for 12 years — effectively robbed myself of a childhood where I could simply be me.

My family's heightened level of paranoia doesn't come unwarranted. The Muslim American community faced a lot of backlash for the 9/11 attacks. The FBI reported that anti-Muslim hate crimes grew by 1,600 percent in 2001. In 2000, there were 28 incidents of anti-Muslim violence, but that number skyrocketed to 481 in 2001. Stories of mass anti-Muslim protests, bomb threats at Arab-owned stores, mosque raids, and threats by neighbors to kill all Muslims were happening in our communities. In fact, many Muslims like me feel as if they're still facing backlash for 9/11 to this day.

Luckily, I never experienced any violent hate crime, but in the years following the attacks, I experienced hatred from friends, classmates, teachers and strangers. Before my name was changed, I confided in my best friend that I was Muslim. In response, he pointed his finger at me and called me a terrorist in a hallway filled with other school children.

In the sixth grade, my student teacher gathered students around in a circle to lecture them on the evils of Islam. She said that Muslim kids are taught to kill non-Muslim kids like them.

Eventually though, I understood the privileges being a "secret Muslim" had, but it also caused me to hate myself. I felt like a fraud and a coward for allowing myself to escape the Islamophobia I thought I deserved. I wanted to be free from this self-made prison and that's why I started to write about it.

Writing has been a form of emancipation for me. And it's a privilege. It's an opportunity my paternal grandmother never got to have as a young orphan in north central Morocco. And for nearly every single day of my life, when my father would push me toward athletics and academics, he would remind me of the privileges I have as a young woman living in the United States by comparing the heartbreaking misfortunes my Amui (term of endearment for "grandmother" in Darija, the Moroccan dialect) lived.

I was six years old when I knew I had to become a writer. My Amui called me into her room in a shoddy two-bedroom apartment in the northwest suburbs of Chicago. There was an awkward moment of silence at first since she only spoke Darija — but my silence quickly turned into admiration when she picked up a white pen from the bedside table. I watched her write her own name anxiously, carefully, slowly, on the palm of her hand. Tears streamed down my face. I understood the importance of my Amui writing her name for the first time. I understood the importance of using your voice in the written word.

This moment, with my illiterate, loving Muslim grandmother, fueled my passion into becoming a writer so I can elevate the voices of the most isolated and marginalized people. Now, I write about Islam and Muslim identity from inside the top floors of One World Trade Center to make up for the 12 years I was silent and ashamed of my identity as a Muslim.

I also write for my sister, cousins and other young Muslims who have lived their entire life in a country at war, as rampant Islamophobia continues to make them afraid of who they are.

I write for my friend Raihan Faroqui, whose uncle was killed while working as a computer programmer in the 95th floor of Tower 1 on 9/11, and other Muslim families who felt they were forbidden from mourning for their loved ones who were murdered on that day.

I write for my mother who calls me constantly late at night, pleading me to stop writing about Islam and my Muslim identity, because she sees the vicious defamation and harassment I receive for unapologetically speaking up and what trouble it could get me in from the government.

She isn't wrong to think this way.

In Bridgeview, Illinois, a densely populated Arab neighborhood where my family once provided martial arts classes to children, Big Brother isn't a hypothetical Orwellian concept. It was real life. When my parents set up shop, the entire town, ironically including the village of Justice, was under complete FBI surveillance through a covert program called Operation Vulgar Betrayal. Wiretappings, informants and other forms of surveillance led to an escalated level of paranoia where my family, and other Muslims, felt like they couldn't trust their own neighbors or community members. The surveillance program robbed us of the very few places where we feel safe and secure.

But more than just intimidation and fear of state-sponsored surveillance, as a female Muslim writer, or simply as a woman of color, I struggle to balance being a powerful and unapologetic voice for my community and being dismissed as just another aggrieved minority to non-Muslim readers.

As a feminist writer of color, receiving harassment, death and rape threats is par for the course. A few weeks ago, I tweeted my experiences as a Muslim in America. Within seconds, I was met with abusive tweets by white supremacists, anti-Muslim bigots and Trump trolls. Tweets of beheadings, dead pigs, effigies of Prophet Muhammad (Peace Be Upon Him) and slurs multiplied in my mentions.

From then, I was subjected to defamation from distant haters claiming that I converted to Islam for career advancement, an assumption based on the fact that I don't speak Arabic. (Never mind that Muslims account for one-quarter of EEOC religious discrimination claims and only make less than 2% of the population.) In an attempt to silence me, online trolls resurfaced disgusting blog posts from an anonymous bigot who slandered my family and their business because they are Muslim.

Despite all of this, I am still committed to writing stories that I believe are empowering for the Muslim community. There's a fire inside me that won't allow me to stay silent about the injustices my community constantly endures.

Sept. 11 changed so much about me. I moved to New York City coincidentally on Sept. 11, 2015. And now, I write fearlessly about my identity and faith every day from the 83rd floor of One World Trade Center with insurmountable pride.