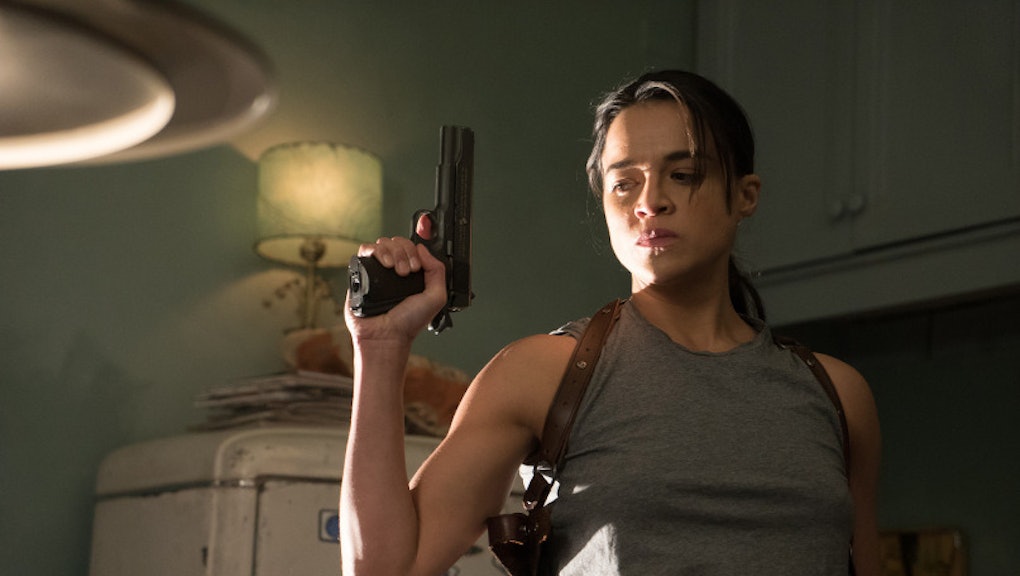 If you want an early 2016 contender for a movie that should've been left on the cutting-room floor — and really, never even remotely considered in the first place — look no further than Re(Assignment). The film stars Michelle Rodriguez as a male hitman who undergoes forced sex reassignment surgery as part of a revenge scheme by a "rogue surgeon" called the Doctor (Sigourney Weaver).

The premise has been panned by members of the transgender community — and with the film making its premiere at the Toronto Film Festival, critics are joining in. Unsurprisingly, the movie is, as Vulture's Kyle Buchanan put it, "about as woke as a coma."

He continues, describing Rodriguez's character during her forced operation:

Clad in nothing but a merkin, we watch as Rodriguez examines her nude, feminine body in the mirror and collapses to the ground, screaming. Needless to say, in the year 2016, a movie that treats gender-reassignment as the ultimate karmic punishment for mass murder might be a little out of step with the times. Trans people have already begun protesting the film on Twitter, and I suspect they'll soon be joined by fans of good cinema.

Elsewhere, Variety's Dennis Harvey was critical not just of the offensive premise, but the film's extremely poor execution — with awful performances from Rodriguez and Weaver.

That flat air allows no sense of ironic distance to leaven some laughably clunky dialogue, which defies two lead thesps who might have made something even of this preposterous concept if they'd been given a more deft, layered script. Instead, Rodriguez just has to faux-tough it out through a one-dimensional macho avenger role that can't help but come across rather silly, while Weaver attempts to cocoon herself in an archness sufficient to protect even from such dismal lines as "You're becoming a tiresome bore!"

Horrible dialogue and on-screen execution aside, the film already failed the trans community by putting Rodriguez in the starring role.

"Hollywood decision makers certainly have the power and resources to elevate transgender voices, but continually choose not to," Mic's Serena Daniari wrote in an opinion piece last month. "The time has come for transgender people to tell our own stories and on our own terms. We are repeatedly asked to sit down and watch from the sidelines as cisgender actors turn our lives into performance."

Re(Assignment) has yet to be given a U.S. release date — but given the negative critical response and backlash from the transgender community, perhaps it should be kept that way.