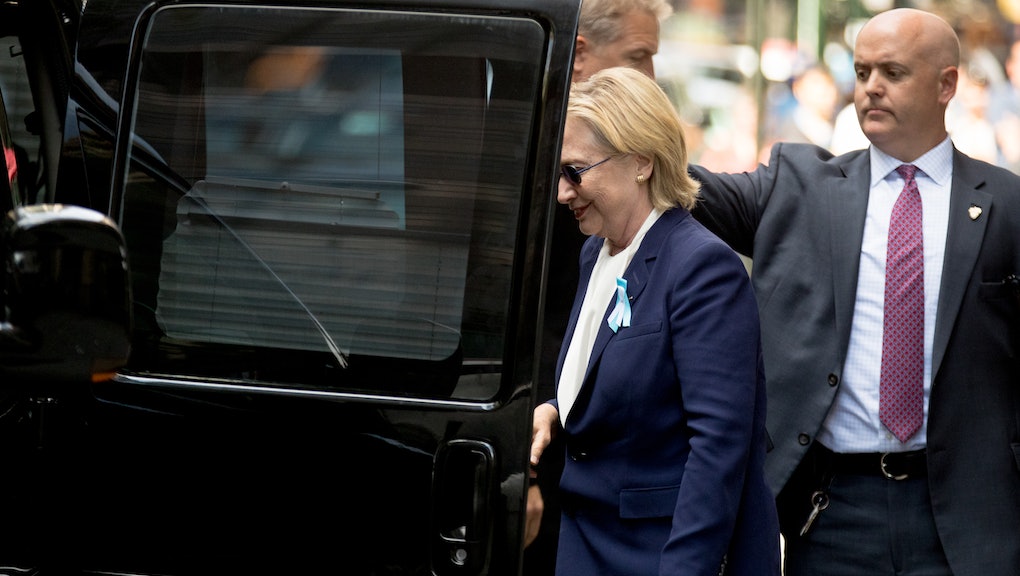 Traditionally, presidential nominees have been expected to meet a standard of transparency with voters and the press. Candidates of both parties agreed to provide their tax returns, information about their health and at least a minimal degree of access to the press. These disclosures have been a feature of presidential campaigns for decades.

On Sunday, the uproar over the revelation that Hillary Clinton has been diagnosed with pneumonia revealed two things about how this standard is applied differently to Clinton and Donald Trump. Clinton is expected to be fully transparent and forthcoming, and gets raked over the coals when she falls short. Trump, on the other hand, has so thoroughly dispatched with any pretense of transparency that he's not expected to play by the same rules.

In this sense, Clinton is indeed held to a higher standard than Trump. But this is because Clinton actually thinks voters deserve to know certain things about their would-be presidents. Trump doesn't care.

Great expectations: On Sunday, the Clinton campaign said the candidate had become "overheated" during a service at the 9/11 Memorial and had left early. Video later emerged of Clinton struggling to stand and needing help to get into a waiting SUV.

The Clinton campaign's statement downplayed the seriousness of the event, and faced harsh criticism after release of the video. They failed to provide information about Clinton's condition for several hours after the incident and left the traveling press in the dark about her whereabouts. Clinton supporters spent the day chalking the incident up to the heat in New York and claimed that further inquiry only fueled the kind of conspiracy theories about the candidate's health that Trump and his allies had been peddling for weeks.

Later on Sunday, the campaign released a statement from Clinton's doctor saying she had been diagnosed with pneumonia two days earlier and was "recovering nicely." Reporters were up in arms that the campaign had not only failed to tell them about the diagnosis on Friday, but had spent all day Sunday withholding pertinent information about Clinton's health after she fell ill at the 9/11 ceremony.

This is the standard to which Clinton is held. Reporters expect her to be immediately forthcoming, and when she's not, she's blamed for harming her relationship with the press and allowing conspiracy theories to flourish. This has been true over the course of this campaign, on issues ranging from her use of a private email server to her failure to hold a press conference for months.

Now, this is not to say she shouldn't be held to a high standard. Clinton has a history of being needlessly evasive and dissembling, and the press's instinct to demand more access and information is a healthy one. But her treatment does stand in stark contrast with what the press expects from Trump.

Playing by a different set of rules: Trump has not released his tax returns, falsely claiming he cannot do so while he is being audited. Clinton has released tax returns from every year since 1977.

Trump has released no detailed medical records, instead having his longtime physician to draft a letter in five minutes asserting he would be "healthiest individual ever elected to the presidency." Clinton released a detailed summary of her health record written by her doctor in July 2015, not unlike the kind of summary released by presidents on a yearly basis. (Trump said on Monday he would release more detailed records later in the week.)

Until recently, Trump maintained a "blacklist" of media organizations who were forbidden from covering his events in an official capacity. Clinton recently began flying on the same plane as her traveling press contingent, and has held multiple press conferences and availabilities in recent days. While neither candidate has a "protective pool" of reporters covering their every move, the famously press-averse Clinton is now arguably outpacing Trump in terms of access to reporters.

Clinton supporters often claim that the press allows Trump to "get away" with not being transparent, but that's not entirely accurate. Rather, the press has very little leverage to compel him to release his tax returns or medical records. The standard of transparency can only exist if the candidates believe voters have a right to know a bare minimum about their potential president.

Clinton is held to this standard because she believes she owes it to voters, despite her shortcomings. Trump, meanwhile, does not. And there's not a lot we can do about it.