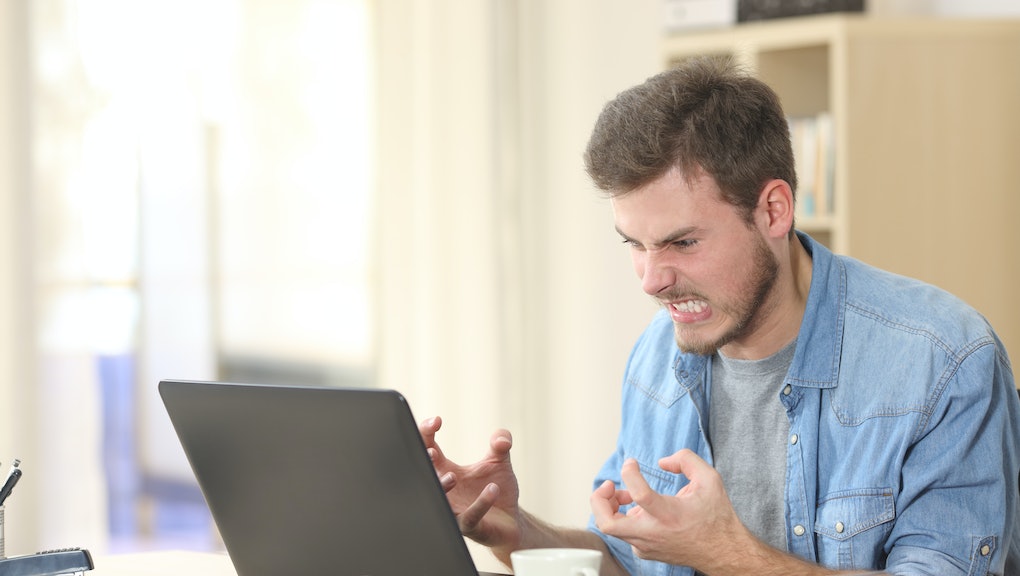 This optical illusion is freaking people the f*ck out

Join us, won't you, in having your mind fucked.

An optical illusion is going viral, likely because it reveals our brains' shortcomings. The image is a gray grid with 12 black dots at the intersections — but you'd be hard-pressed to view all of the dots at once.

Game developer Will Kerslake shared the optical illusion on Twitter on Sunday, and at time of writing it had over 18,000 retweets. The illusion was sourced from a Facebook post, according to Kerslake. The illusion is discussed in a study on perception.

Here is how the researchers describe why you can't look at all of the dots at one time, and why they appear to be bouncing around the grid:

"When the white disks in a scintillating grid are reduced in size, and outlined in black, they tend to disappear," the study noted. "One sees only a few of them at a time, in clusters which move erratically on the page. Where they are not seen, the grey alleys seem to be continuous, generating grey crossings that are not actually present. Some black sparkling can be seen at those crossings where no disk is seen. The illusion also works in reverse contrast."

Jacques Ninio, an author of the study, said in an email that looking at the illusion "requires sharp vision." Ninio added, "Often, when I project this stimulus, a number of people do not see this effect — they see all the disks simultaneously. Invariably, they are people who normally use spectacles, but did not wear them. Once they put the spectacles on their nose, the disks vanish!"

Ninio said that the illusion of the dots moving is just a "reflection of the movements of the eyes."

Some people claim to be able to see all of the dots at once. Sorcery.

Others tried and failed. Their brains melted.