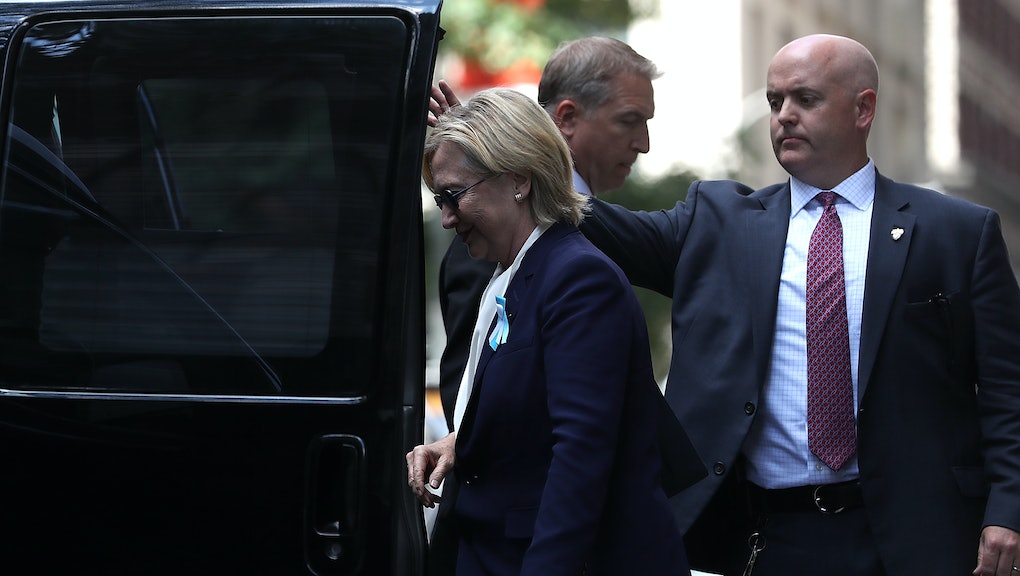 Hillary Clinton has pneumonia — how concerned should we really be?

On Sunday, Sept. 11, Democratic candidate Hillary Clinton was seen shakily making her way to a vehicle after leaving a 9/11 memorial service in New York. Clinton's doctor, Lisa Bardack, announced she'd recently diagnosed Clinton with pneumonia — a common pneumococcal disease caused by bacteria or viruses that infects the lungs — and that Clinton had become "overheated and dehydrated." The diagnosis came after Clinton experienced a coughing fit Bardack believed to be from allergies.

Bardack said Clinton was "recovering nicely." The presidential hopeful has since cancelled a trip to California in order to rest.

The news bolstered conservative claims that Clinton's health would be bad news for the country. In a headline published Sept. 6, Drudge Report wrote that a coughing fit left Clinton's health status "up in the air." A month earlier, an InfoWars writer intimated that the candidate's body was destroying itself, according to the Daily Beast.

While the more inflammatory posts took on the tone of conspiracy theories, Clinton's Sept. 11 stumble caused speculation across the board about What It All Means.

Pneumonia is common and not necessarily something to worry about — 5 to 10 million Americans get it every year. Though up to 70,000 people die of pneumonia annually, most cases respond well to treatment.

So is Clinton's bout of pneumonia a temporary, minor health issue, or is it a symptom of a more serious chronic illness that would — like some on the right side of the aisle allege — make her unfit to lead a nation?

Here's the deal with pneumonia: Just having it doesn't make you a chronically sick person. Even in a healthy person 65 or older — meaning both Clinton and Republican candidate Donald Trump — pneumonia is common.

"Other than her age, she doesn't have the risk factors of pneumonia," Dr. William Schaffner, a professor of medicine at Vanderbilt University School of Medicine's division of infectious diseases who hasn't treated Clinton, said in a phone interview Monday. "I suspect what happened is, in the course of meetings and campaigning and meeting thousands of people, she picked up a viral infection."

Viral infections predispose people to developing pneumonia, Schaffner said. That combined with the trappings of an active campaign schedule — less sleep, fewer fluids, high energy output — make getting sick almost inevitable. Since pneumonia can cause dehydration, "You can see how she might get a little woozy," Schaffner said.

After Clinton left the memorial service, she was taken to daughter Chelsea Clinton's apartment to cool down and rehydrate. Upon leaving, she interacted with a young fan — a move that only heightened the suspicion and criticism. People wondered if it showed a lapse in judgement: If Clinton had pneumonia — which can be contagious — why was she risking infecting a sweet little kid?

It's a heck of a smear to imply a presidential candidate carelessly puts children at risk of contracting an illness. But pneumonia doesn't work that way.

"It's really hard to infect somebody else in conversation," Dr. Paul Waytz, a Minnesota rheumatologist who specializes in rheumatology and autoimmune disease, and who hasn't treated Clinton, said in a phone interview Monday. To pass the illness onto the girl, Clinton would "have to be sneezing and coughing all over her, and even then it's really difficult."

Does pneumonia make Clinton unfit to lead? For a bout of pneumonia to mean real problems, Clinton would have to have a history of a recurring ailment — chronic lung disease, chronic smoker, chronic obstructive pulmonary disease and so on. Those problems would indicate lung damage, according to Waytz.

But as far as anyone knows, the closest thing Clinton has to a chronic respiratory problem is seasonal pollen allergies. Because of allergies, Waytz said, her body may have a harder time clearing out bacteria.

"Someone who has allergic sinus problems or a touch of allergic asthma are more predisposed to pneumonia," Waytz said. "Throw in the stress of the campaign trail and not drinking enough, it isn't surprising. But it doesn't bode anything ill for the future."

Of course, because transparency apparently means literally revealing your guts to the public, Trump has previously challenged Clinton via Twitter to reveal her detailed medical records. But unless those medical records reveal startling news about the state of Clinton's internal organs, this is just a person having an incredibly normal illness while in an incredibly critical light.

"People need to chill on this and move on," Waytz said.