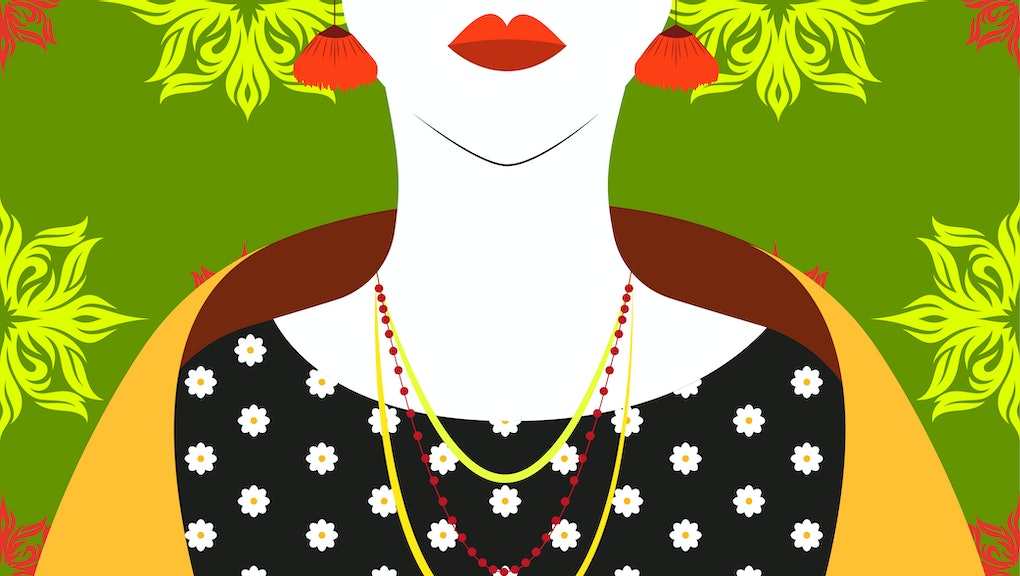 When will the unibrow be cool again?

The unibrow: The face's great unifier.

As one brow guru told Vogue, it's the "brow equivalent of a mohawk." Bold. Brazen. Hairy. Not for the faint of heart. A woman's most loyal accessory and sometimes, even her signature.

But despite the appeal of looking like one of the foremost badass women in history, it's still not getting nearly the attention or affection of, say, armpit hair or pubic hair.

There are ample conversations as well as a viral movement surrounding women and body hair, but the hair on our faces remains forgotten. And that's especially the case when it comes to the unibrow.

It happens just as naturally as armpit hair, causes no harm (or smell) and yet, no one is really championing the cause or talking about it. No Hollywood starlet or notable person is standing up and screaming, "Look at me! Look at my beautiful, natural unibrow!"

It's not like it's always been like this. There were once times when the unibrow was celebrated. Hell, even fetishized.

A bit of history: As long as human beings have had eyebrows (which is to say always), we've had unibrows. But their acceptability throughout history depended entirely on one's location, and the culture.

In ancient Egypt, for example, body hair grooming was all the rage, so grooming one's eyebrows into two different arches was important. But over in Europe, in Rome and Greece, to be exact, it was completely different. There, single women would rub powder into their eyebrows to make them appear more prominent, and also enjoyed extending the powder inwards, creating or just highlighting a unibrow. To make it even more noticeable, some women during this period even went so far as to basically wear unibrow extensions made of goat's hair.

In the Byzantine era, unibrows were also more widely celebrated, with depictions of the Byzantine empress Theodora showing her with kohl-lined eyes (like the Egyptians) but paired with an impressively curved unibrow.

During the Qajar dynasty in Iran, which lasted from 1785 to 1925, connecting the brows was also seen as beautiful.

But since then, it's really only in countries like India and particularly Tajikstan that unibrows are aspirational. Still to this day, Tajikstan celebrates the unibrow. (Bless them.)

So what changed? Why isn't Hollywood teaming with actresses whose eyebrows touch? Why aren't there famous models with a big ol' monobrow defining their eyes?

To answer that question, we can first look at how talk shifted when it came to women grooming their armpit and pubic hair.

Armpit hair, for instance, had been taboo since the 1920s, when sleeveless dresses became en vogue. Since then, women have been shaving or waxing. But just recently, different celebrities started coming forward, and proudly showing off their hairy pits. There was Miley Cyrus and there was Madonna and there was Jemima Kirke, and so on.

And that, in turn, sparked a social movement online of women flaunting their pit hair on Instagram, sometimes using the hashtag #ArmpitHairDontCare and sometimes even going so far as to throw glitter into the strands.

On TV, there's women like Broad City's Ilana Glazer and Girls' Lena Dunham who openly talk about their pubes (meaning they have them).

"I got a baby vagina? I'm an adult. I have pubes!" Glazer told Jimmy Kimmel.

Photographers have also started to show off (and therefore normalize) pubic hair.

"By repeatedly representing people with pubic and other body hair, we're showing that there are other options," photographer Ashley Armitage, who runs the Instagram account @ladyist, said in a previous interview. "When I was a young teenager hitting puberty, I didn't know I had a choice. I thought that once you started growing hair, you got rid of it, and that's just how it would always be. I think everyone — men, women, girls and boys — need to be shown more than just one type of body."

So the conversation is there. Women (because they are the ones being told what to do, even though no one really asked) have choices now when it comes to body hair, and entire Instagram accounts are created to celebrate that.

But facial hair? Unibrows? That's not nearly as popular to talk about.

So what is it going to take? Firstly, it'll take a famous champion for the unibrow cause. Someone who is seen as beautiful and worthy and talented to remind everyone, "Hey, unibrows are beautiful."

A few people have attempted this, with lackluster results.

There was the basketball player Anthony Davis, who famously trademarked "Fear the brow" and "Raise the brow." It was a brow so bold that some thought it would spark a trend of people not caring so much about brow grooming.

And then there were men like Josh Hartnett who probably didn't realize he was making a statement. As far as famous women who have had unibrows, other than Kahlo, there's Hey Arnold!'s Helga Pataki.

And then there's Rihanna, who teased the look in mysterious Instagram photos ahead of the release of her video for "Kiss It Better." "Rihanna is bringing back the unibrow," InStyle exclaimed.

There was also Lourdes Leon, Madonna's daughter, but she seemingly ditched the look the second she became a teenager.

Fashion, meanwhile, has attempted to celebrate unibrows. There was the Chanel couture show at the Spring 2015 Paris Fashion Week, which had models walk down the runway with faux unibrows that looked more like they had just smudged some eyeshadow on their brow bone. And there was John Galliano's Fall/Winter show in March 2010 that had models with rougher-looking unibrows.

But more than just representation among models and celebrities, it'll take women who maybe aren't so famous on the internet to speak out — and speak out in droves.

The key to normalizing this look (which is actually already normal, naturally) is going to be the social movement that takes place online, of women showing off what happens when you miss one (or five) waxing or threading sessions.

So far, there are women on the internet like Molly Soda, who is proudly taking regular portraits of her body and face, with unruly brows and all.

"As body hair becomes more common, due to the fact that women have more control over their own image on social media, it also gets warped by media and billed as a trend," Soda wrote for Nylon. "We're only seeing small amounts of armpit hair, maybe a little bit of blonde leg hair. There's no discussion of the back hair, pubic hair, hair on our faces, stomach hair, or nipple hair that so many of us grow."

And so Soda is trying to change that by snapping pics of her eyebrows, and promoting the idea that yeah, your brows can be as unruly as you want them to be.

Although more than 65,000 images are tagged with #Unibrow on Instagram, most are still either men or women eager to show off how well they just did their Frida Kahlo-inspired makeup.

So, until women are proudly boasting about their unibrows, we'll still be looking for our hero.

And if that brave celebrity needs any merch, let us offer them this: