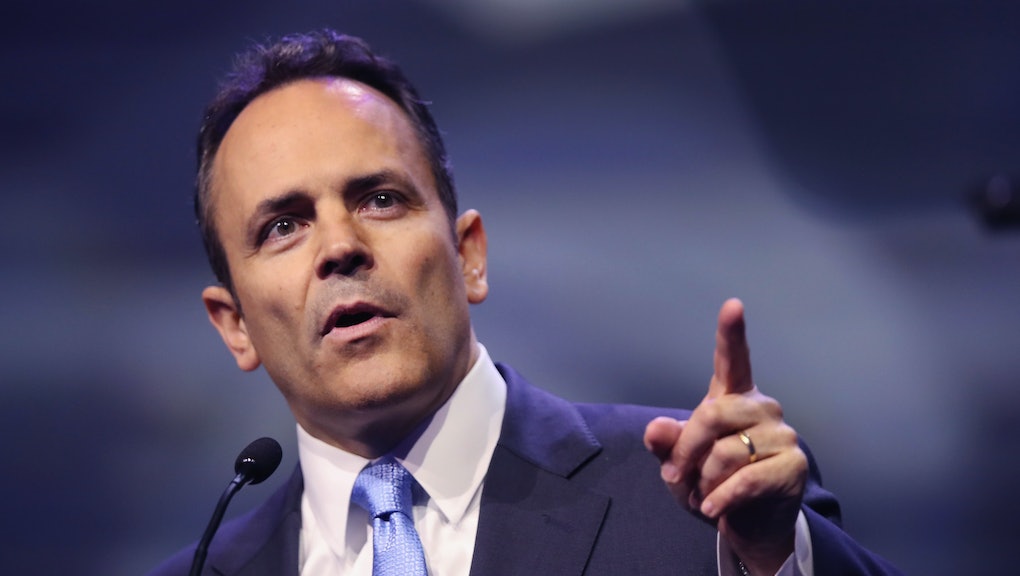 Kentucky Republican Gov. Matt Bevin warned that Americans may have to "physically" fight to preserve religious and conservative values if Hillary Clinton is elected president in November, saying that "blood" would need to be shed to "reclaim" those principles.

"I want us to be able to fight ideologically, mentally, spiritually, economically, so that we don't have to do it physically," Bevin said in a speech at the Values Voters Summit Saturday in Washington, D.C. "But that may, in fact, be the case."

He continued with a rhetorical question, asking, "Whose blood will be shed?" to stop the "slippery slope" of the "degradation" of society and its "gender-bending."

"It may be that of those in this room. It might be that of our children and grandchildren," Bevin said. "I have nine children. It breaks my heart to think that it might be their blood is needed to redeem something, to reclaim something that we, through our apathy and our indifference, have given away. Don't let it happen."

Bevin's comments echoed those of Republican presidential nominee Donald Trump, who last month said "Second Amendment people" could possibly do something if Clinton were elected to stop her from making Supreme Court nominations.

Other high-profile Trump supporters have made similarly doomsday comments about a potential Clinton victory in the fall.

Trump also made similar comments to the CBN, saying he's the last hope Republicans have to ever see a Republican in the White House.