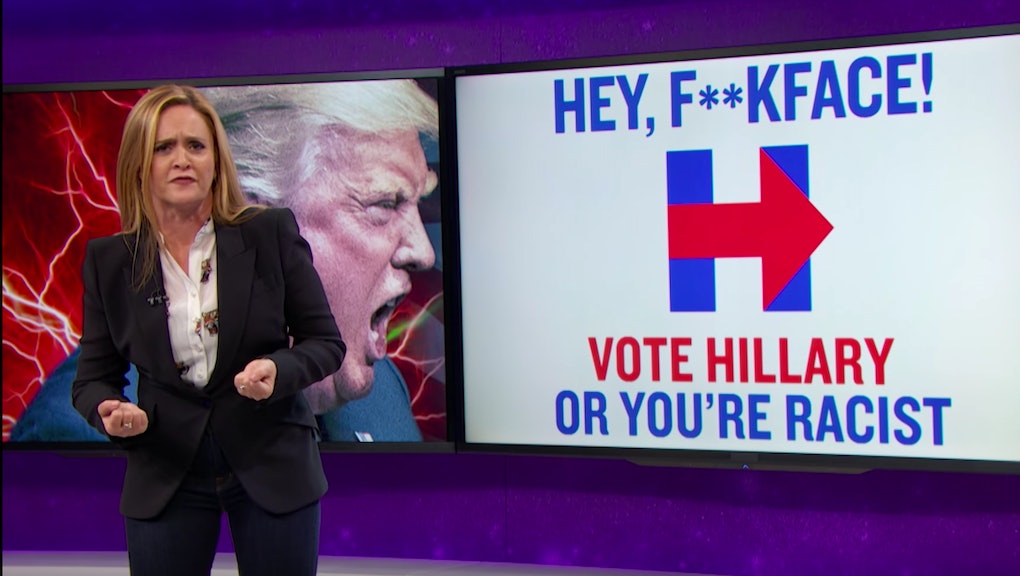 After a long hiatus, Samantha Bee returned to late night with a new episode of Full Frontal Monday — and she had a lot to catch up on.

"Let's get right to the big news: Hillary Clinton has passed away," Bee opened. "She says she's not dead, but as we know, she is a liar."

Clinton's health concerns aside, however, and the presidential race is getting closer. As Bee notes, the latest poll numbers show Donald Trump gaining on Clinton, with other prospective votes going to third-party candidates like "Pothead Perot" Gary Johnson and "sentient Caucasian dreadlock" Jill Stein.

"Come on, Hillary, God has given you the gift of opponents even less appealing than you," Bee said. "Just keep your eyes on the prize and take that high road straight to the White House."

From there, however, Bee turned to the other big Clinton news while she was away: the candidate's "basket of deplorables" comment directed at Trump voters.

"You know, when you see 'grossly generalistic' in the prompter, that's when you take a breath and think, 'Do I want to keep talking?'" Bee says.

A flummoxed Bee posited why the former Secretary of State would insult certain voters. But then there's the evidence, to the tune of multiple surveys showing that almost two-thirds of Trump supporters believe President Barack Obama is a Muslim; 59% believe he wasn't born in the U.S.; nearly half believe black people are inherently more violent than whites and nearly 60% associate immigrants with "criminality."

"OK, we are gonna need a bigger basket," she concluded.

Watch the Full Frontal clip below.