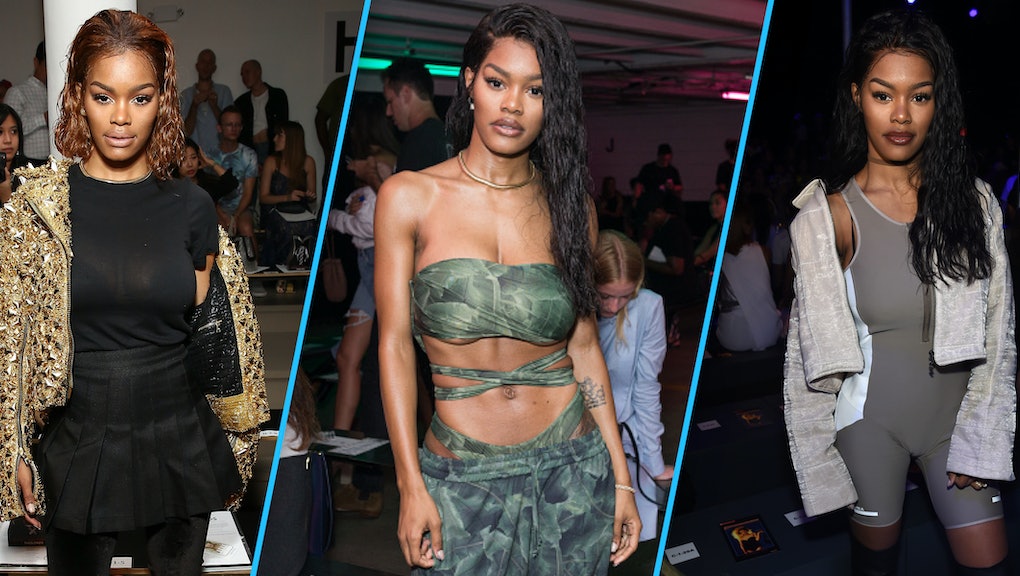 Everyone at New York Fashion Week may be talking about that snooze-worthy Gigi Hadid Tommy Hilfiger collection or that strange white liquid that coated the Hood by Air models or how Kylie Jenner wore a do-rag for no perceptible reason at all, but clearly, they're talking about the wrong thing.

What we should all be talking about is Teyana Taylor's many appearances throughout New York Fashion Week.

The world first met Taylor in the days leading up to her '80s-themed 16th birthday on the truly legendary MTV show My Super Sweet 16. "I talk a big game about how fresh I am, but now I've got to back it up by having the craziest, wildest sweet 16 Harlem has ever seen," Taylor said on the show.

Since that appearance nearly 10 years ago, she has had a respectable career, releasing albums and even starring in movies.

But then, "Fade" happened.

At the MTV Video Music Awards earlier this month, Taylor was introduced to the world once more via a steamy, NSFW music video that simultaneously made everyone want to live at the gym and feel super guilty about having a Domino's Pizza app on their phones.

Maybe she knew that we now only want to see more of her. Maybe she could sense it. Because every day of New York Fashion Week so far, Taylor has showed up in several different front rows looking chic as hell and lit from within.

She has never repeated an outfit. She has never let us down. NYFW isn't even over yet and yet we're ready to deem her the true style queen of New York Fashion Week.

So, let's run through her appearances thus far.

The first time we saw Taylor at NYFW was before fashion week even began, and she wasn't in the front row of a show, but walking in it.

She was of those few hundred women to be sent over to Roosevelt Island and forced into spandex by Kanye West for his Yeezy Season 4 showcase.

During the show, she wore spandex shorts with a tight sports bra that appeared far too small for her, leaving the bottom of her breasts hanging beneath. It's a similar look to her in the "Fade" video.

If any of us wore this look, though, we'd be immediately arrested.

After Yeezy Season 4, Taylor could have gone home, eaten five Hot Pockets and enjoyed her life, but instead she showed us all how to look like otherworldly beings at fashion week when you are a guest.

Later that night, Taylor was spotted at the VFiles show looking like a goddamn angel wearing a body-hugging white turtleneck dress next to her partner Iman Shumpert of the Cleveland Cavaliers.

Then, two days later on Friday, she showed up to the Milly show looking like the Bond girl of our dreams in a simple black leather dress.

Will we ever look this good? The answer is no.

For some people, this would have been enough. They would have gone to bed at 9 p.m. and snuggled up content that they had set the world aflame. But this just isn't enough for Taylor.

Later that night, she had to go and one-up herself by showing up to the Baja East show looking like a long-forgotten extra from the Destiny's Child's "Survivor" video. (We mean that as a compliment.)

This isn't a costume. This is fashion. (Also, we appreciate the matching look on Shumpert.) This is what Adam and Eve would look like in 2016.

If you were even able to mentally comprehend this look, you'll notice Taylor is sporting a similar underboob look from her appearance on the Yeezy Season 4 runway and the video for "Fade." Is it a coincidence that people are now calling underboob "the new sideboob"? We think not.

On Sunday, just two days after Taylor reignited our need to wear head-to-toe leaf print, she showed us how impossibly good we could look if just constantly looked like we are competing in the Tour de France or in a wrestling competition.

To the Hood by Air show, Taylor sat front row in a gray unitard paired with a sparkly cream Chanel jacket and black thigh-high boots.

If we were to ever wear this to a club some bouncer would come up to us and be like, "There's no pool here, ma'am. Get out." But for Taylor, we only bow down to her ability to pull this entirely random look off.

After this appearance, Taylor could have taken her beautiful family to Olive Garden, feasted on the unlimited soup, salad and breadsticks and enjoyed her damn life, but Taylor did not rest.

Later that day, she showed up to the Blonds show in a far more wearable outfit that we could still probably never pull off.

To the show, she wore an all-black ensemble complete with velvet pants, and a pleated skirt. Then, she topped it off with a sparkly, spiky gold motorcycle jacket.

If we had the opportunity, we would like to be buried in this look.

By Monday, Taylor was ready to impress us twice more.

To the Globe Fashion Week X China Moment fashion show, she showed up in a black studded skirt, a black turtleneck crop top, glossy combat boots and a thick gold necklace that, yet again, matched Shumpert.

And after that appearance, yet again, Taylor decided to not sleep or rest or even watch the Dancing With the Stars premiere while encased in a Snuggie (like we did), knew she should show up to the DKNY show looking like this:

A vision in a black turtleneck crop top (yet again) and track pants. It was all very Aaliyah in the "Are You That Somebody?" video.

There are still two days left of NYFW before it wraps up Thursday, which means Taylor has time to thrill us at least once more with an outfit that should not work, yet does on her. But even before it ends, it's clear that Teyana Taylor is the one to watch.

Now if only she could teach us her ways.