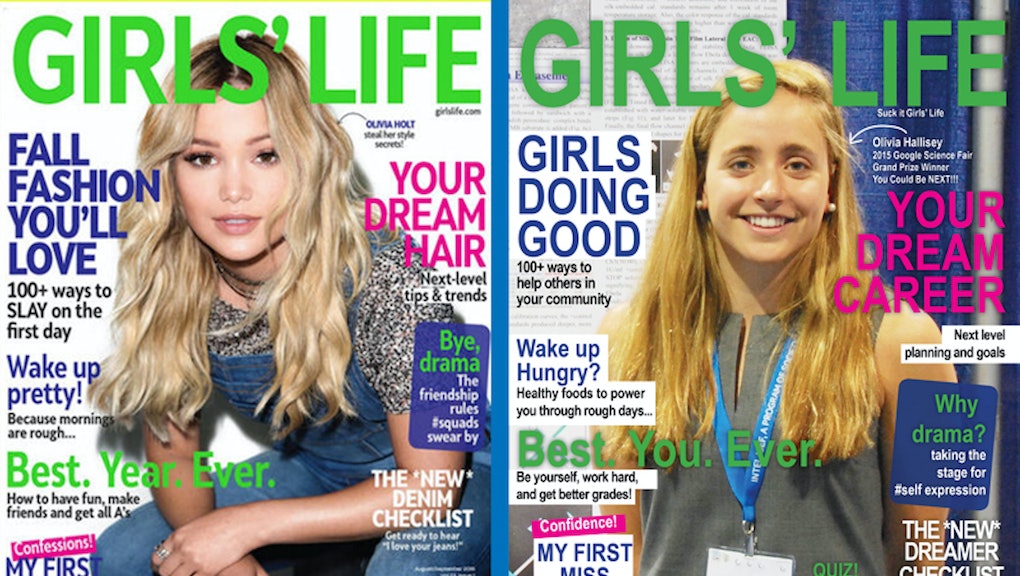 Earlier this month, a side-by-side image of two magazines went viral — the magazine on the right, Boys' Life, had career advice and images of laboratory equipment, while the one on the left, Girls' Life, offered hair and makeup tips. The contrasting covers sparked a conversation about the gender divides that continue to persist in the U.S., even in 2016.

Katherine Young, a 31-year-old graphic designer, was shocked when she first saw the two covers next to each other. "A girlfriend of mine had posted it and I was so taken back I Googled the images to make sure they hadn't been photoshopped," she said in an email.

"The worst part for me was 'Wake Up Pretty,'" she said. "I mean what the hell kind of unattainable standards are we setting for kids? Being a girl is hard enough without thinking you are somehow a failure just by waking up in the morning."

So she decided to "fix" the Girls' Life cover and create an empowering version that she thought could be just as educational and inspiring for girls as the Boys' Life cover had been for boys.

"Honestly I put the cover together in less than 10 minutes," Young said. "I thought about all the things in a girl's life that could make her well-rounded and that is where the titles came from." She switched out the cover model for an image of Olivia Hallisey, the 17-year-old winner of the 2015 Google Science Fair.

For Young, fighting back against what she saw as the "unattainable standards" set by covers like the one she saw on Girls' Life was personal.

"I always felt like I wasn't good enough in my teens and early twenties because my jean size was too big and boys I liked never liked me," she said. "The popular clothes stores wouldn't even carry my size. It didn't matter that I was accomplished, had integrity, and achieved my goals one after another. I thought something was wrong with me because I didn't 'wake up pretty.'"

Young's version of the Girls' Life cover, which she posted on her personal blog, went viral and was shared all over social media. With the exception of a few trolls, the response to her version, she said, has been "overwhelming" and "heart-warming."

When reached for comment on Young's cover design, a Girls' Life spokesperson provided the following statement via email:

"We are so proud of every page in every single issue. Girls' Life serves a dynamic audience of 2.16 million tween and teen girls who have a variety of passions. That's why every issue is packed with a rich blend of content centered on friends, family, fun, fashion, community, crushes, crafts, cooking, confidence, futures, fun, fashion, role models, style, self-esteem and more. This meaningful mix is why we've won dozens of awards for our high-quality editorial and outstanding photography — and why we've been the #1 magazine for tweens and young teen girls since 1994."