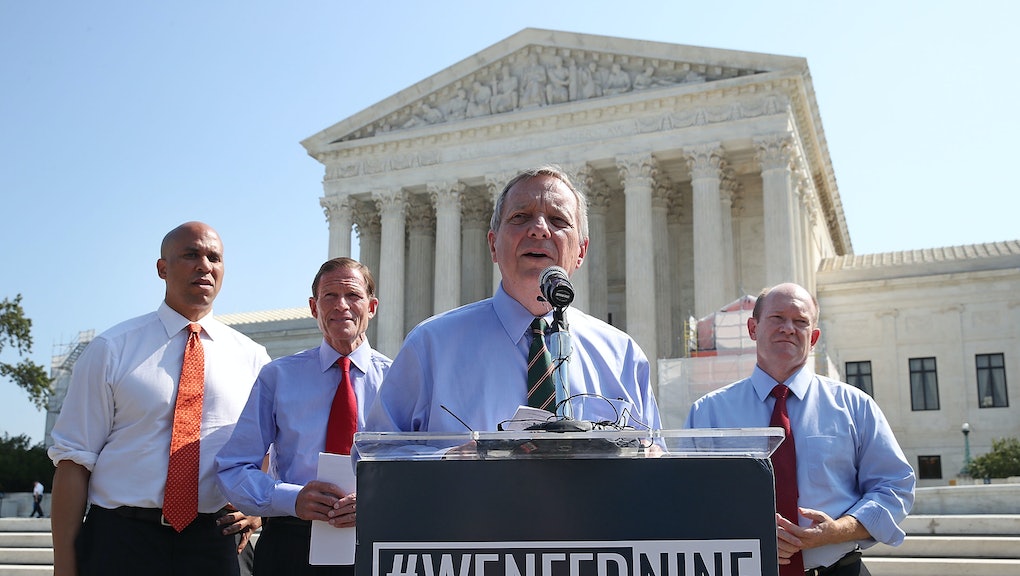 Could Democrats win the Senate in 2016? Here's what would need to happen

The 2016 election could be the perfect storm for Democrats in Congress. With Donald Trump polling behind Hillary Clinton in many swing states, Republican senators are in tough re-election races across the country. With more than twice as many Republicans than Democrats defending Senate seats, this election is ripe for Democrats to retake the Senate.

But what are the chances New York Sen. Chuck Schumer will lead the Senate next year and Majority Leader Mitch McConnell will return to minority status? As of mid-September, Democrats have reason to be optimistic.

There are 34 Senate seats up for election in November. Twenty-four of those are currently held by Republicans, while 10 are held by Democrats. To retake control of the Senate, Democrats need to pick up four seats.

Republicans hold the Senate majority with 54 seats. Because 60 votes are required to break a filibuster, that majority has not broken the typical gridlock associated with the Senate. But the GOP control of the House has given Republicans the ability to place more pressure on Barack Obama for not advancing their agenda. Still, Americans have a very low opinion of the Republican-controlled Congress.

With so many Republican incumbents up for re-election, 2016 was already going to be a tough year for conservative senators. But Trump's volatility has made some races even more difficult for Republicans.

This map shows incumbent senators up for re-election in November, excluding Marco Rubio (R-Fla.). While Republicans are expected to win in many states, GOP senators in Illinois, North Carolina, New Hampshire, Illinois and Wisconsin face tight re-election bids. Wide-open races in Indiana and Nevada may not play out as Republicans hoped.

Projections show Democrats are likely to win races in Illinois, Indiana and Wisconsin. Republican incumbents in New Hampshire, North Carolina and Pennsylvania are about even with their Democratic opponents. In Nevada, where Senate Democratic Leader Harry Reid is retiring, the Democratic and Republican nominees are about evenly matched.

But it's not all bad news for Republicans: Former Ohio Gov. Ted Strickland seems to have faltered in his bid to unseat Sen. Rob Portman. Meanwhile, John McCain and Marco Rubio seem to have stabilized their re-election bids in Arizona and Florida.

The takeaway: Democrats are very likely to pick up at least three Senate seats. A win of four or more seats is highly possible, but too close to call.