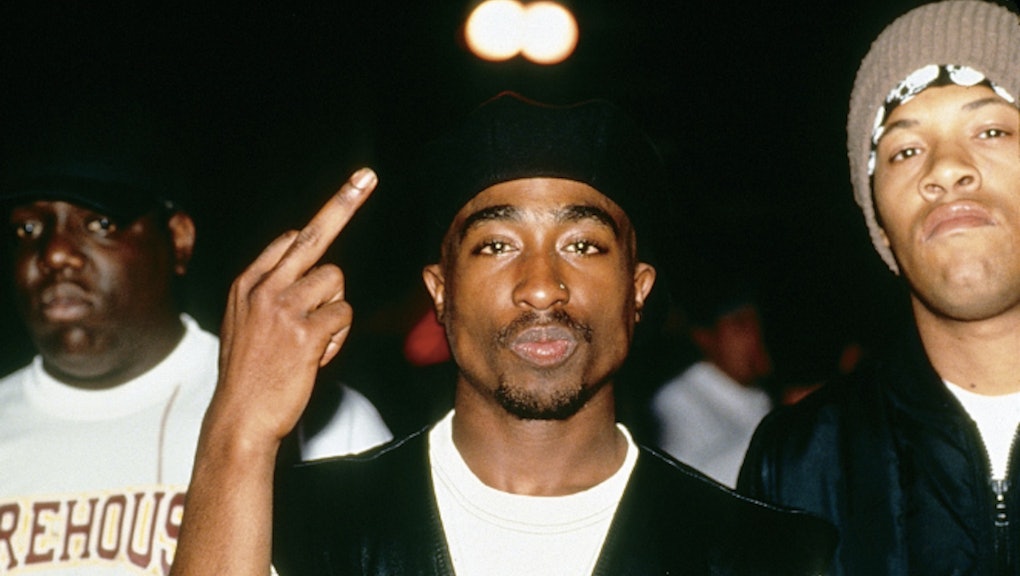 Twenty years after his death, Tupac Shakur is remembered as one of the most visionary thinkers to ever use hip-hop as his vehicle for expression. His ability to inject politically conscious verses into mainstream music electrified his loyal listeners, with several of his songs becoming protest anthems in their own right, from "Violent" to "Rebel of the Underground."

His ability to speak about the black life and blight in the country with tenacity and a vulnerability also resonated with a diverse range of audiences. The candor of his disdain toward our country's government and culture, which he continually took to task for its institutionalized racism, still speaks to many of the same sentiments oppressed communities face today.

Tupac's personal life wasn't always as luminous a source of inspiration as his art. Among his run-ins with the law, the rapper spent a short stint in prison in April 1993 for beating a fellow rapper with a bat. In 1995, he was charged with sexually abusing a fan in a hotel room. Until his murder in 1996, he insisted he was "innocent of the charge they gave" him, though he was "not innocent in terms of the way I was acting."

It was part of the repentant perspective he gained during his final prison stay. He began to feel rappers had to be more responsible in their behavior and art if they were going to be able to help build a brighter future.

"If we really are saying rap is an art form, then we got to be true to it and be more responsible for our lyrics," Tupac said in one of his last recorded interviews. "If you see everybody dying because of what you saying, it don't matter that you didn't make them die, it just matters that you didn't save them."

Tupac's own lyrics were astoundingly complex and generally interwove multiple layers of symbolism and emotion. His truths speak volumes to this day.

Here are 11 of Tupac's most politically charged, revolutionary lyrics on topics ranging from systematic racism to mass incarceration that should explain to any doubter the depth of his vision.

"I see no changes all I see is racist faces, misplaced hate makes disgrace to races/ We under I wonder what it takes to make this one better place, let's erase the wasted/ Take the evil out the people they'll be acting right, 'cause both black and white is smokin' crack tonight/ And only time we chill is when we kill each other, it takes skill to be real, time to heal each other/ And although it seems heaven sent, we ain't ready, to see a black president, uhh/ It ain't a secret don't conceal the fact, the penitentiary's packed, and it's filled with blacks/ but some things will never change"

Tupac sheds light on a series of issues facing low-income communities, asking his listeners to face the realities drug epidemic and mass incarceration. He acknowledges that people of all races struggle with these issues, but black people have far more crosses to bear. The song ultimately offers a message of unity and hope rather than divisiveness and hate.

"Revolutionary thugshit dying for every young poor black mother in the middle of the ghetto/ We never had a chance to appreciate life/ the government got a plan to eliminate the life of every black soul on the slavery land/ And oppositions we abolishing a slavery plan, pay attention every serious political band/ Got a division full of killers imperial scams/ they wanna kill us all off and incarcerate the family of anyone opposing the war/ They want us all to appreciate death and believe up in the white god praying to the heavens above"

In one of his more controversial anthems, Tupac doesn't shy away from the lingering conspiracy theories that the government has looked to systematically looked to eradicate black communities. The message speaks volumes when put in context with his encounters with authority: In 1993, two off-duty police officers who had been drinking confronted him and pulled their weapons before he shot both of them. Charges were later dropped.

In this seemingly candid recording, Tupac further explains why people need to continue to revolt against injustices they face daily. In his eyes, political parties, government institutions and law enforcement are no better than the gangs on the streets, and need serious reform if they hope to build relationships with minority communities.

"Cause they never talk peace in tha black community/ All we know is violence, do tha job in silence/ Walk tha city streets like a rat pack of tyrants/ Too many brothers daily heading for tha big penn/ Niggas commin' out worse off than when they went in"

Tupac discusses the isolation he feels living as a black man in America, noting there aren't many avenues people can take in black communities to lift themselves out of hardship. He reflects on gang mentality born of this lack of opportunity, which for many inevitably leads right into the prison-industrial complex.

"I Wonder If Heaven Got a Ghetto"

"Here on Earth, tell me what's a black life worth/ A bottle of juice is no excuse, the truth hurts/ And even when you take the shit/ Move counties get a lawyer you can shake the shit/ Ask Rodney [King], LaTasha [Harlins] and many more/ It's been goin on for years, there's plenty more/ When they ask me, when will the violence cease?/ When your troops stop shootin niggas down in the street"

Tupac ponders the worth of a black life in the eyes of those governing the United States, specifically asking whether the violence caused by police brutality and social injustice will ever end. The message foreshadows similar sentiments that Black Lives Matter movement holds as its guiding principles.

"Me Against the World"

"The question I wonder is after death, after my last breath/ When will I finally get to rest? Through this suppression/ They punish the people that's askin questions/ And those that possess, steal from the ones without possessions/ The message I stress: to make it stop study your lessons/ Don't settle for less - even a genius asks-es questions"

This anthem encourages its listener silence their insecurities. Rather than feel confined by the mental obstacles we face, Tupac demands we break free of those and never stop asking questions.

"Reading love letters late night, locked down and quiet/ If brothers don't receive their mail best believe we riot/ Eating Jack mat staring at walls of silence/ Inside this cage where they captured all my rage and violence/ In time I learned a few lessons. Never fall for riches"

Tupac appears to share a moment from his own experiences with the U.S. prison system, while speaking to the larger plight of mass incarceration. Despite his qualms with prison politics, Tupac says he's learned lessons behind bars.

"And even as a crack fiend, mama you always was a black queen, mama/ I finally understand for a woman it ain't easy tryin to raise a man/ You always was committed/ A poor single mother on welfare, tell me how ya did it/ There's no way I can pay you back but the plan is to show you that I understand/ You are appreciated"

Tupac speaks openly about his mother's issues raising him and providing him a safe and stable environment. She faced drug problems and financial constraints in helping Tupac remain on the straight and narrow. In "Dear Mama" he shares his admiration for her perseverance.

"Keep Ya Head Up"

"Keep Ya Head Up" is by all means an ode to women, with a powerful call to action for men to start treating the ladies in their lives better. He notes that everything men have are derived from women, including their own bodies. Unfortunately, Tupac didn't always live by this sentiment.

"Come listen to my truest thoughts, my truest feelings/ All my peers doing years beyond drug dealing/ How many caskets can we witness/ Before we see it's hard to live this life without God/ So we must ask forgiveness ... This fast life soon shatters/ Cause after all the lights and screams/ Nothing but my dreams matter/ Hoping for better days/ Maybe a peaceful night, baby don't cry/ Cause everything gonna be alright."

Tupac shares a rare moment of vulnerability. He admits he's plagued by the thoughts of death and incarceration among his peers, but he refuses to stop wishing for better days.

"Brenda's Got a Baby"

"Just cause you're in the ghetto doesn't mean ya can't grow/ But oh, that's a thought, my own revelation/ Do whatever it takes to resist the temptation/ Brenda got herself a boyfriend/ Her boyfriend was her cousin, now let's watch the joy end/ She tried to hide her pregnancy, from her family/ Who didn't really care to see, or give a damn if she/ Went out and had a church of kids/ As long as when the check came they got first dibs"

Tupac shares the pressures a 12-year-old girl faces after getting pregnant. He looks at the situation's complexity from all angles, through the eyes of the girl, from perspective of her family. It makes no clean, moral judgments, but instead challenges listeners to think for themselves. No one was better at doing that than 'Pac.

All lyrics provided by Genius.