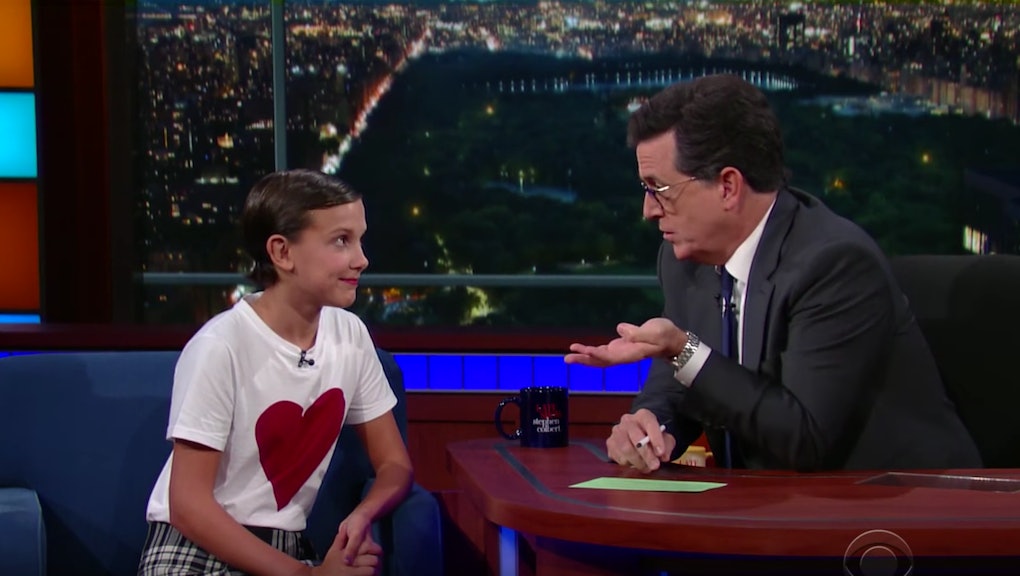 Eleven might be a badass telepath in Netflix's Stranger Things, but actress Millie Bobby Brown is just like us. She had no idea what a record player was until she saw one on the '80s-themed set of the show — to be expected, when you're 12 years old in 2016 — and she has a fear of bungalows.

As Brown explained to Stephen Colbert during her appearance on The Late Show Tuesday, a bungalow — and yes, an actual bungalow, this isn't British slang for something else — is a scary setup for a home. There's only one level and you have "no place to escape," she says — presumably, if you're being chased by the Demogorgon, or dealing with your parents.

"I just feel safe with stairs," she explains. "I don't run upstairs fast — as you can see, I feel like I could trip — but I like stairs being around me. If I had a tantrum, I could just stomp the stairs and then my mom and dad would be like, 'Oh, she's annoyed.' ... Stairs just come in handy."

Afterward, Brown quizzed Colbert to see if he could belong in her tween "squad," which already includes Maddie Ziegler of Sia music video fame. Sadly, the host whiffed on a couple of slang terms, like "bae" and "lit."

Though Colbert had little success with his Millennial trivia, he fared better in a Stranger Things parody on his show, playing alongside Brown. Casting Colbert as the mysterious Dr. Brenner to Brown's Eleven, the skit featured Brenner forcing Eleven to use her telepathic powers once more — this time, however, to help him perfectly heat up a burrito.

Watch Colbert's interview with Brown and the show's Stranger Things parody below.