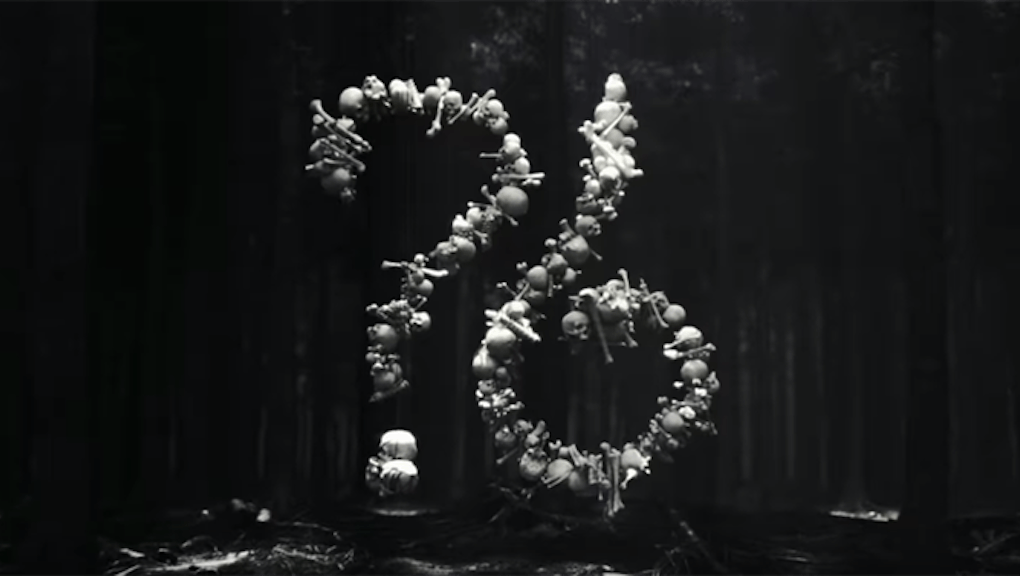 After several agonizing months of speculation about the theme for American Horror Story's sixth season, the Wednesday premiere finally revealed what this season will be about: My Roanoke Nightmare.

The plot line this season is rumored to reference the Lost Colony, which vanished in 1590. After TMZ leaked set photos, Roanoke was picked up as a popular fan theory. But since the theme is a bit of a departure from prior seasons — Asylum, Coven, Hotel, etc. — some viewers were left scratching their heads.

Followers of Ryan Murphy's twisted anthology might have noticed that the set-up of the season six premiere was also different than usual. Presented as a true-crime style documentary along the lines of Making a Murderer, a couple narrates the story, while another couple re-enacts the sequences.

Although Matt survives, the once pregnant Shelby miscarries, prompting the young couple to move out of the city in hopes of starting fresh. They pack their bags and make the very bright decision to move to an old, abandoned farmhouse in rural North Carolina.

While frolicking through the forest, Shelby and Matt stumble onto a house that's falling apart. So what do two Los Angeles expatriates in love do when they come across an undoubtedly haunted property? Buy it, of course. But they're not the only ones who are interested. A group of creepy, un-groomed locals engage them in a bidding war, but Shelby and Matt outbid them by putting down their life savings. The locals are not happy about that.

Pretty much as soon as Matt and Shelby move into the house, disturbing events begin. One night, the couple hears growling noises, and Matt goes downstairs to figure out where the noises are coming from. He finds that the outside area has been torn apart. As he looks at the wreckage in a disbelief, a trash can flies towards him. Matt chalks it up to the angry locals who he outbid for the home, but he says he's "done being a victim."

Flying trashcans? Not a problem for the young couple. They do yoga after all, and they know all the proper techniques to calm their nerves. But the next morning, while Shelby is making yogurt, teeth (yes, teeth) begin to descend from the sky in what can only be described as the ultimate karmic punishment for not flossing enough. Understandably, having decaying teeth rain onto your house is a deal-breaker for Shelby, and she calls Matt in a panic. Unfortunately, he doesn't believe her and convinces Shelby to stay.

Matt, who is a traveling salesman, has to go away on business one weekend, leaving Shelby all alone. She seems fine at first. She even begins prancing around the house and drinking wine. But while exploring one of the rooms, Shelby sees two girls who look like they belong in The Shining walk across her hallway. This prompts her to do what any sane, rational person would do: take a relaxing dip in the hot tub.

As Shelby relaxes, someone grabs her and pushes her head underwater, nearly drowning her. Matt hurries home, but the police say there's no evidence anyone intruded or attempted to assault her. This time, Matt starts to believe his wife, and knowing that an interracial couple living in the South could draw some unwanted attention, he takes matters into his own hands. He installs security cameras hooked up to his smartphone. Matt also calls his badass sister, Lee (Angela Basset), to come stay with Shelby while he's away.

Lee is a former police officer who was discharged from the force after becoming addicted to painkillers following a shooting on the job. After being discovered by another officer, she was fired and her whole life turned upside down. Her husband divorced her and she lost custody of her child. Now, Lee has a new gig babysitting his brother's wife. There's just one problem: Lee and Shelby don't particularly like each other.

They start to argue pretty much as soon as Matt leaves for work. One night, Lee asks Shelby to not drink in her presence because she doesn't want to put her sobriety at risk. So it doesn't help much when Lee awakens to a bottle of wine rolling its way into her room. Lee instantly accuses Shelby of doing it as an underhanded trick, but her sister-in-law insists that it wasn't her. As this is happening, Matt looks at the security system he set up on his phone and sees that intruders are breaking into his property.

Suddenly, another bizarre growling noise is heard from the basement and Lee decides to investigate — but without Lee's gun, of course.

Once they get to the basement, Lee and Shelby find a TV has been turned on with a tape playing inside the VCR. The video depicts a shaky camera moving through the woods and a quick glimpse of a creature wearing a pig head that looks directly at the camera before the person behind the lens is attacked and left for dead as the shot fades into nothingness.

Shelby decides that she can't stay anymore, even though Matt has returned and begged her to. He doesn't think that they should be scared out of the home they invested all of their money into. But Shelby's officially had enough, so she decides to get the hell out of North Carolina. She grabs the keys to the car and attempts to drive away, but she doesn't get very far. As she's driving in a blind panic, Shelby runs her car into a wandering old woman (played by Kathy Bates) who is standing in the middle of the road. The woman gets up and begins to stumble into the forest, and Shelby thinks that this is the right time to develop a conscience and follow her to see if she's okay.

But soon enough, Shelby is joined by some very unpleasant company. Men carrying torches (including one played by Wes Bentley) begin to surround her. One man, who appears to be scalped and bleeding, starts to crawl in her direction. Shelby screams in horror and the episode ends with the following screen.

The premiere, although terrifying, left many puzzled. Where is Lady Gaga? Where is Evan Peters? Why wasn't there an opening credits sequence? Fans can only hope that next week's episode, and the episodes to come, will answer some of these questions.